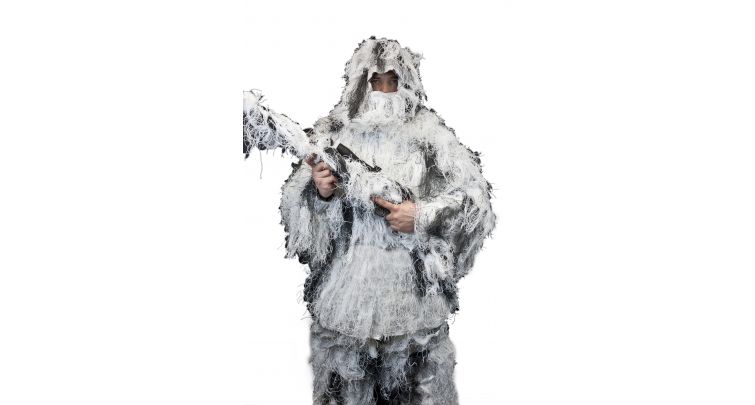 If you have an extra $20,000.00 to spare, feel free to buy the entire Invisible Man Kit, available from Optics Planet. The video “advertisement” on the Optics Planet website made me laugh harder than I have in a long time. Think of the acting from one of those upside down tomato basket commercials, and then drop that down about ten notches. This product, recently reported on Fox News, is becoming more popular by the day.

The Invisible Man Kit comes complete with a wide range of camouflage outfits, since one cannot be invisible while wearing jeans and a T-shirt. The kit comes with two separate ghillie suits, one for “woodland” (a deep forest green), and one for “snow” (mostly white, muddled with brown). For those of you who are unfamiliar with a ghillie suit, let me explain. Designed to “resemble heavy foliage,” imagine part Chewbacca, part Cousin Itt. But now imagine they haven’t had a bath in a few months, so their hair gets all rolled up, rasta-style. Very invisible.

As much as I wish this was a joke, there are people who actually purchase this product. The cost of the kit is not solely in the ghillie suits (they average only about $60 online), but in all the additional gadgets. The kit comes complete with Night Vision Trail Camera, Parka, Hog Boar Urine Scent, Nikon Binoculars, and a Browning Knife Combo Set, among other things. The supplies included in the kit are legitimate, and supposedly U.S. Army quality. I searched for a few on eBay and the prices are comparable to what Optics Planet is asking, though comments suggest by searching for, and buying, the pieces separately, one could save over half the ticket price.

Who would need an Invisible Man Kit? Well, the company offers many suggested uses other than the more obvious Hunting, Law Enforcement, and Military. You can also use your $20,000 kit for Hide and Seek, Capture the Flag, Dating, or (my personal favorite) Surviving Dinosaur-Themed Amusement Parks. Optics Planet obviously intends their Invisible MAN Kit only for those of the male gender, and not mankind in general as the kit includes Men’s Concealment Holster Shorts (the equivalent of jockey shorts with a slot around the waistband for the barrel of a handgun). The description also suggests this kit is a way to prevent a fight with “your wife” over muddy clothing.

The webpage is riddled with pretentious phrases to make the product sound that much more serious and important. Some of my favorites are: “an epic game of hide and seek,” “tricking cougars is historically more difficult than capture the flag,” “you need superhuman hearing,” and “an under-equipped invisible man is an ineffective invisible man.” It is hard to believe after reading paragraph after paragraph FULL of mumbo-jumbo like that, there are still people out there who go on to add this to their cart, enter their credit card, Paypal, or Amazon account information, and wait the five to ten business days for their product to arrive.

Let’s say you know someone who has purchased this kit. They spent their $20,000 and are fully equipped to hide in even the most ridiculous places, such as in front of the refrigerator or a parked car (as re-enacted in the video). Now let’s say you have bought into the whole Invisible Man Kit but you, sadly, didn’t have that much extra cash just lying around the house. You can still play with your Invisible Buddy! Within the last few days Optics Planet released their latest product: The Invisible Hunter Kit. This kit has several of the same products from the original Invisible Man Kit, but is more suited for a serious hunter (and less for someone in a Scare Contest). The Invisible Hunter Kit has far less goodies, and the price reflects it, costing just under $1,000.00.

I can’t imagine what would possess someone to actually cough up $20,000 for something like this. That’s more than my NEW Jetta! A serious hunter might be able to make this investment back if they actually used all the products and basically shot enough game to survive for the rest of their life. As much as I am poking fun, and laughing, at this product, I would love to see someone using it. I want to know if, when they step into their ghillie suit and don their Night Vision Goggles, they feel serious or silly. Do they think they are really just like the military, or do they know this is sort of a joke? Does the owner of such a kit tell people they have it, or do they show off their toys, one at a time, and not lump them all together as being part of the Invisible Man Kit?

I, admittedly, would also not mind playing with some of the gadgets and gizmos…but not for twenty grand!