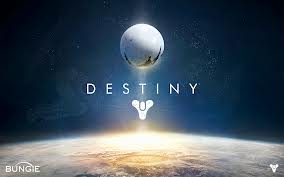 After months of speculation Bungie has finally broken the silence on their new IP, Destiny. And it looks immense.

Essentially, despite what they say, it looks like Bungie are creating a massively-multiplayer-first-person-shooter with some RPG elements thrown into the mix for good measure. Humanity on the brink of extinction, time traveling robots, sci-fi magic stuff, customizable spaceships. This is the stuff Geeks dream about.

As far as the story goes, we know very little. Humanity’s golden era has passed, and some unknown force laid waste to almost our entire species. The survivors are holed up in one city on Earth, protected by some giant orb thing called ‘The Traveler’. You play one of the ‘Guardians’ – men and women who have been given certain magical abilities by The Traveler and whose job is it to save humanity. According to Bungie you play one of three classes; Warlock, Hunter, and Titan. Although they have fancy names, we can assume that these classes break down into traditional RPG models: magic, stealth, and combat.

However you regard the Halo series, no-one can deny the sheer magnificence that was Halo: Combat Evolved. It completely redefined FPS as a genre. A regenerating health bar, for example, now the staple of any FPS, was first introduced by Bungie in the original Halo.  From the weapons to the vehicles to the A.I. to the visuals; Halo was a game-changer. Every FPS since has felt its influence. And I haven’t even mentioned the multi-player.

And now Bungie are setting out to do it again. This new franchise will span the next ten years and will, over time, be more influenced by the gamers than by the developers. At least this is what Bungie claim. Possibly Bungie have something like EVE: Online planned where whole guilds have been created and epic wars fought, by the gamers themselves.

As the player traverses through the world, chance encounters are set up with other players, seamlessly. There are no lobby screens, no waiting for people to join, you might be simply exploring an alien ruin when you run into another player, or a whole group of players. You can then choose to work together, or go your separate ways. This all sounds like a really dynamic and interesting twist to the FPS genre. There are also safe-zones, where you can meet and interact with other players, purchase goods, upgrade your ship etc. etc.

On top of that is a pvp multiplayer system, which Bungie has remained particularly quiet on. Now all this, to me, rather sounds like an MMO. I mean, that’s no bad thing. I’ve been waiting for an MMOFPS since we were teased by the promise of Huxley. Yet according to Bungie, Destiny isn’t an MMO. As Bungie’s lead engineer Chris Butcher stated;

These are living, open worlds with evolving stories, changing time of day…and every one is full of players . . . Destiny is an always online experience, but it’s not an MMO.

Hmm, interesting. To be fair, Bungie have explicitly stated that Destiny is to be subscription free. And that’s rare for MMOs. So there.

You will also be able to access Destiny through devices like your phone or tablet. For now, all we really know about this is that you will be able to send messages to other players as well as receive new missions. This kind of thing has been tried before, of course, with Halo Waypoint and Call of Duty Elite but with the emphasis Bungie is placing on ‘sociability’, I expect Destiny to be far less superficial in this regard.

So when, and on what can we expect to see Destiny? Information here seems a little confused with a number of different sites reporting different things. According to Gamespot, Destiny will be a PS3 and Xbox 360 title and yet Activision has stated that Destiny will not be a 2013 release. Considering the fact that the new Xbox and Playstation will be released sometime this year, and the fact that Bungie’s plans seem ambitious for current gen hardware, I think we will see Destiny released on the next gen machines, sometime in 2014.

I, for one, cannot wait.