Guillermo del Toro’s upcoming giant monsters vs. giant robots movie Pacific Rim is nothing short of a geek’s dream come true. But when the first trailer was released last month, the focus of many gamers’ attention was not on the interdimensional monster invasion, but instead on the familiar voice of the film’s A.I. Fans of the popular videogame series Portal will of course recognise the voice as that of the game’s antagonistic and genocidal A.I. computer system GlaDOS.

In a recent interview with Toronto Sun del Toro revealed that he had intentionally pushed to have to the voice of GlaDOS in Pacific Rim due to being a huge fan of the Portal games.

“I wanted very much to have her, because I’m a big Portal fan. But just as a wink. She’s not cake-obsessed. She’s not out to destroy humanity.”

The recognisable computerised tones of GlaDOS were originally conceived by Portal developers Valve and were provided by American voice actor and opera singer Ellen McLain. It was del Toro who originally approached Valve about incorporating the voice into the film, an idea that was met with no resistance from the PC game developers also famous for their Half-Life and Team Fortress series, as well as their popular Steam gaming platform.

“I said, ‘Look, there’s no A.I. I’d rather have than GlaDOS,’. Says del Toro, who also admits that the final version of the voice used will be slightly less intimidating than that found in Portal. “The filter we’re using is slightly less GLaDOS. Slightly. The one in the trailer I wanted to be full-on GlaDOS.” 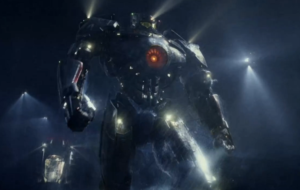 In addition to his comments on Pacific Rim, Guillermo del Toro also revealed that his survival horror game inSANE is still in the works despite its cancellation by publisher THQ in the summer of 2012.

“We are in talks with a very, very big company. I can’t say who, but it’s one of the big ones. They really responded to the game, they responded to what we were trying. Some of the devices of the game I need to update, because now I’ve seen them in other games that just came out. That always happens. But the principle we’re trying to do with the game is to make it a really immersive narrative experience. It’s still a really challenging proposal.”

There’s still no information available as to when inSANE will be released, but until then we can look forward to Pacific Rim which is sue for theatrical release July 12th of this year.