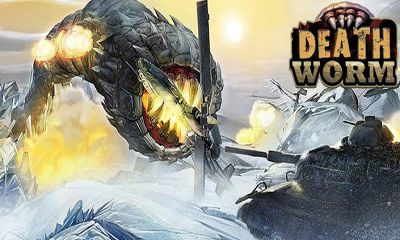 The original Mongolian Death Worm of Gobi Desert might never get traced, but you can actually be one if you are an eager Android gamer. Originally released as a PC game, Death Worm is now available for Android mobile users worldwide. Proving its popularity with millions of download, the game is fast securing its position among the most addictive games of all time. Well, there are many relevant reasons that confirm the addictiveness of this unique game and you’ll find those listed below:

Those who love action-packed games can develop instant liking for Death Worm. As soon as the game begins, you get the control of a deadly death worm ready to destruct everything coming its way. The monster can fly in the air, get under the ground and travel across deserts, jungles and cities. Seamless levels and uninterrupted action constantly boosts the fun quotient.

Death worm in the game has been designed to destroy things like cars, tanks, aircrafts, helicopters and even UFOs. The player can make the monster eat birds, animals (including elephants and camels) and people and defeat armies and aliens. Many levels set time limits to destroy or eat specific numbers of targets, making the game more challenging for the users.

The game offers great upgrades through various levels to enhance the monster’s abilities. You can use these upgrades to increase the size or speed of the monster and to gain better health and destruction power. Power-ups are available in the form of fireballs, to destroy hard-to-access targets like helicopters and nitro to boost the speed & jumping ability of the worm. 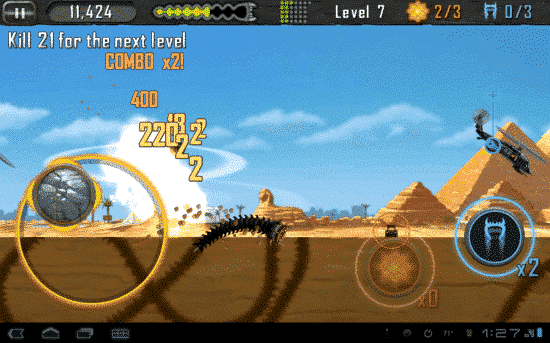 Campaign and Survival are the two gaming modes available for the game. In addition, there are two mini games that have been bundled up as bonus for extending the gameplay further. There are three different stages (or environments) in Campaign mode, each having 15 levels of its own. This means that a total of 45 levels will keep you engrossed with ultimate fun and pleasure.

The graphics are simple, yet effective and the soundtrack is just perfect for the kind of action that the game brings on. Worth mentioning is the fact that the graphics quality is much better than Super Death Worm game. Choose among 3 worm types and let the entertaining game roll on your Android enabled smartphone device.

Every game needs not to be complicated and Death Worm proves the fact. No matter whether you play it on an Android phone or tablet, you can discover the new enthusiasm to get your name on the game’s Leaderboards and Achievements. Doesn’t it sound addictive enough for you?