Home NewsEntertainment Date Night: A Review of Joss Whedon’s ‘In Your Eyes’
EntertainmentTV and Movies 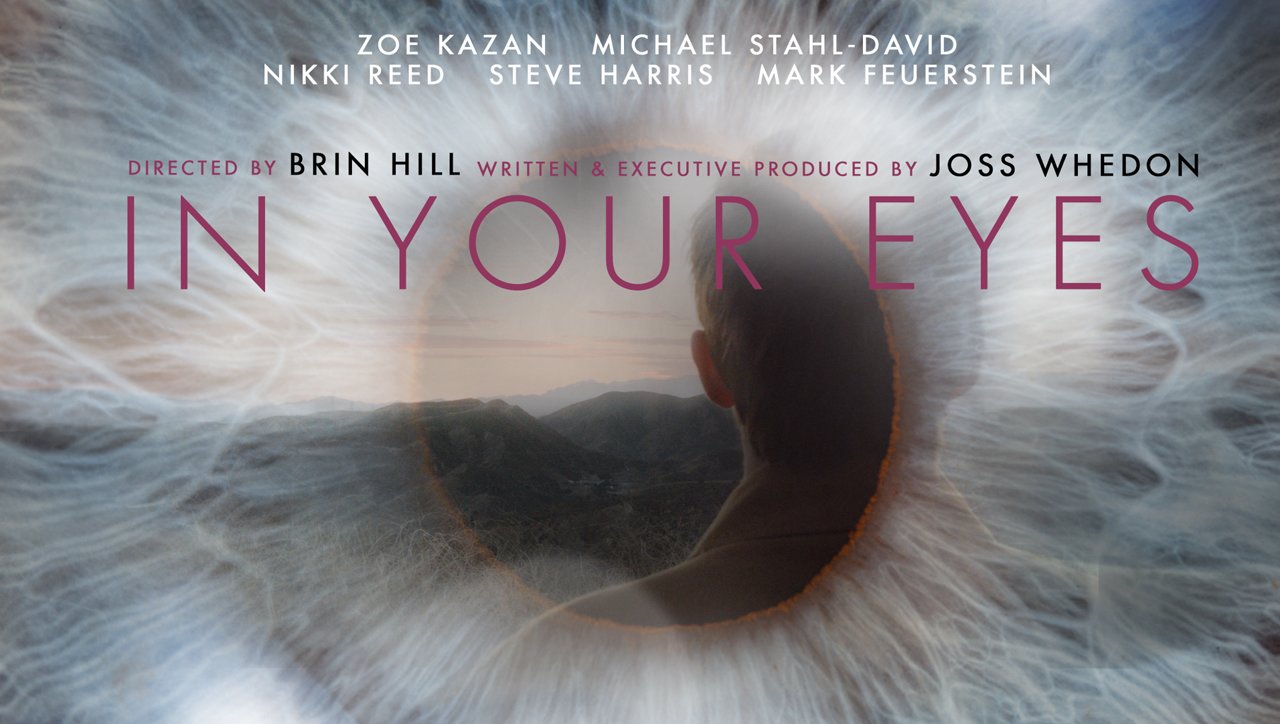 No one on this website needs to be told who Joss Whedon is. The 49-year-old writer/director is famous in the fanworld for creating beloved television shows such as Buffy the Vampire Slayer, Firefly, and Angel. He’s also responsible for some awesome independent projects like Dr. Horrible’s Sing-a-Long Blog, but after he helmed 2012’s The Avengers (which became the third-highest grossing film worldwide), he has basically taken the crown as the undisputed King of Geekdom.

Whedon’s success with blockbusters has not caused him to put away his indie projects for good. In fact, Whedon’s newest film started with a script that he wrote back in 1992. The film is a paranormal (but-not-how-you-think) romance called, In Your Eyes. Don’t worry if you don’t have an indie movie house nearby because In Your Eyes was made available on April 20th via simultaneous release, and you can watch in on your computer for just five bucks.

Dylan (Michael Stahl-David) is a guy who can’t seem to get his life together. He’s always felt like a disappointment, and he stayed silent when he got caught in a burglary-gone-wrong, sending him to prison for two years while his criminal buddies got off scot-free. Rebecca (Zoe Kazan) is the wife of a controlling doctor, and she doesn’t have much to do except attend his boring parties and try not to think about her painful past. She’s lonely, depressed, and fragile, feeling that her life has very little excitement or even meaning.

What Rebecca and Dylan have tried to ignore their entire lives is that they can feel something more out there, someone else who is always with them. And, after Rebecca saves Dylan from a near-collision, they finally discover their “someone else” is real. Dylan is in New Mexico and Rebecca is in New Hampshire, but through some supernatural ability, they are able to feel each other’s feelings, hear each other talk, and if they concentrate hard enough, see the world through one another’s eyes.

Dylan and Rebecca slowly become closer, talking to each other all the time and sharing every aspect of their lives. But their separate worlds keep calling them back, making them choose between the lives they’ve allowed others to dictate and the perfect comfort and happiness they feel when they’re together. The film seems to pose the question: if we find someone who truly gets us, how hard do we have to try to be a part of the rest of the world?

What It Was Lacking

As a longtime Whedonite, I will basically watch anything that is remotely attached to Joss Whedon. Upon finding out that he wrote the script, I was excited. His writing, as always, shines in the dialogue, but the story itself is more intricate than a simple “boy-meets-girl with a twist.” Whedon’s stories always have layers, which makes this movie an even better watch the second time around. Fragments in the story that seemed like filler or might have come off strange at first were actually revealed to have a deeper meaning later on in the film. It’s always easy to admire Joss Whedon’s attention to detail with his characters. You will be rooting for Rebecca and Dylan by the end, possibly even at the top of your lungs as the film does get your heart racing at its climax.

However, I did feel that it was missing one of the big elements I usually look for in a Whedon film. I was disappointed to see it didn’t have quite the feminist edge. Rebecca, while being the only non-ditzy major female character in the film, wasn’t really my cup of tea at first. It took me a while to get used to Kazan’s acting style which was a bit Zooey Deschanel-lite. I also wasn’t a fan of the fact that Dylan’s expertise was cars while Rebecca’s was… cooking? It’s a common trope, and why couldn’t the girl be good with a power drill?

Rebecca isn’t a Slayer or a master assassin like other Whedonverse women, and that’s okay. Feminism doesn’t just mean physically strong women, but I did want more from Rebecca as Dylan seemed to be a more well-rounded character at times. However, there is one moment that is guaranteed to have the women on their feet cheering for Rebecca, and that’s more than we can hope for in many films today.

The movie’s real triumph is the relationship between its two leads. It’s a sweet and sexy romance which Whedon has always done well, and Director Brin Hill shoots the couple beautifully. Stahl-David and Kazan have real chemistry despite their physical distance, and the film’s best moment is an unconventional sex scene that really hits the viewer with the couple’s love and desire for each other.

The film also has a fantastic soundtrack. Whedon even wrote a song for it! Look for the scene where Rebecca tells Dylan to turn up the radio, and they dance together.

Any Whedon fan doesn’t need me to tell him or her to watch the movie; that’s already a given. But for the casual viewer, let me just say this: I’m glad I spent my five dollars to watch In Your Eyes. It’s much better than what I often see for ten or fifteen dollars at the movie theater, and I was entertained, surprised, and invested. Spend the evening in with your honey, pop some popcorn, and rent this film. Or, if you’re having a girls’ night, gather ’round a laptop and watch it for the romance and that scene where Stahl-David is shirtless. You’ll be interested in the story, and you’ll have a good time. Because it really is true of all Whedon films: he writes memorable characters and makes you care about them. And that’s why we all love him, right?

You can rent the movie here ($5 rental accessible for 72 hours). The soundtrack is also on sale here.