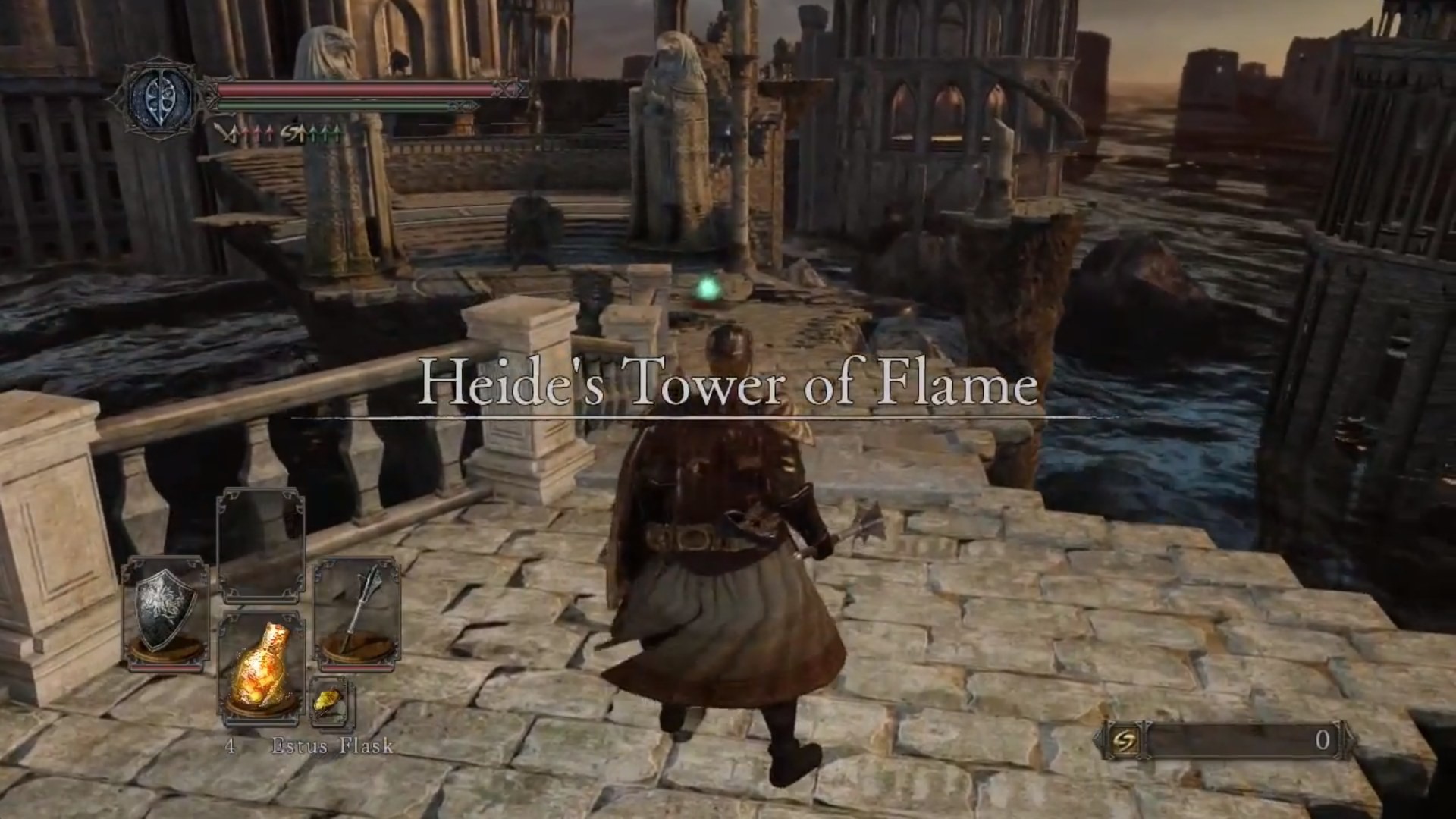 Soul of a Nameless Soldier x1

Soul of a Proud Knight x1

Please refer to the Majula part of this walk through for the entrance to this location.

This area is quite small but its enemies are nothing to scoff at. You will enter through the waterway from Majula and find yourself on a small walkway. Up ahead is a round platform above the water. There will be a great big knight waiting for you there, wielding a great sword. Before facing off, go to the right and down the staircase (behind the giant eagle statue). You’ll find a bonfire at the bottom. Now you can go kill the first knight. These guys tend to have three/four attack combos with a wide range. Try to stay behind them and defeat them that way.

On the second platform, you will encounter an enemy with a mace. Make sure to kill him for his sublime bone dust. Behind him is a corpse with a soul of a nameless soldier and a human effigy.

The third platform has a knight guarding a switch. If you defeat him and activate the switch, the floor in the Dragonrider boss area will rise. This can make your battle with the Dragonrider  a little easier. In front one of the columns is a corpse with a Lloyd’s talisman. 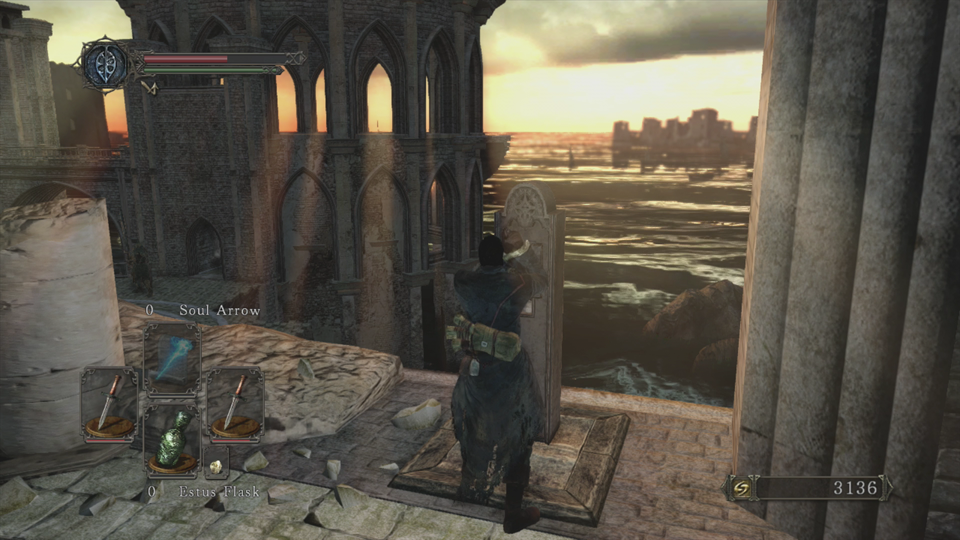 Go left, across the long walkway and you’ll enter a tower with three knights waiting. Obviously this is going to be a pretty tough battle. It might be best if you could lure them one by one to attack you rather than facing them all at the same time. Make sure to hit the secret switch in this room, which will raise another section of the floor in the Dragonrider area, making the fight with him even easier. 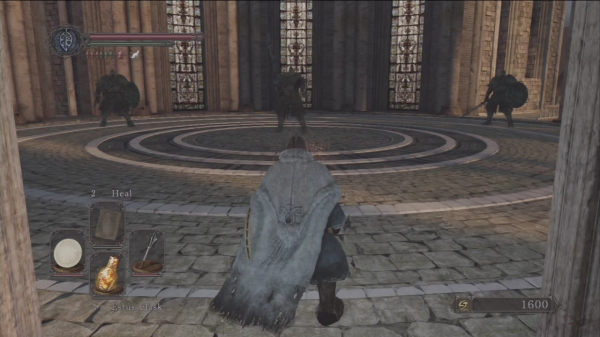 After you have defeated the knights, there are two ways you can go.

Go down the path to the right. Go down the staircase and kill the knight there. Be sure to find the chest in this area for three green blossoms. There is a summon sign outside the mist door, should you wish to summon help for the boss fight with the Dragonrider.

Hopefully, at this point, you’ll have hit both switches. As you can see, you’ll be fighting on a circular island. Falling, of course, means death. The two switches completely eliminate this threat. The Dragonrider will try and push you off the edge with a series of attacks. The Dragonrider is very much like the old knights, slow and his attacks are easily dodged. He shouldn’t pose too much of a problem.

After defeating him, go through the doorway and up the stairs. You’ll be inside the tower and you will find another bonfire. In the area is Licia of Lindeldt, who sells miracles. Exhaust her conversation and she will move to Majula. Once there, she will be in the room with the mysterious contraption, allowing you to access the Huntsman’s Copse.

From the tower, go out onto a walkway and into the other tower. Go down the spiral staircase. Behind the stairs is a corpse with a monastery charm. Go through the door and down the hall. To your right will be a knight guarding a door, another will be straight ahead. Go straight down the hall and you’ll find a corpse on a railing with a human effigy and dark troches. There are two other corpses with a soul of a proud knight and an old knight halberd.

Return to the door that the other knight was guarding. It will open to stairs that will bring you down to the next level. You will find another knight. The left leads to a dead end; the right is a knight and a hallway. Down the hall, you’ll find a room with a pressure plate. Standing on this plate will allow you to descend.

Once the lift stops, go through the door to another hall. You’ll find a knight in a flooded room in front of yet another door. Once you go through that door and up another flight of stairs, you’ll be at a fork. Left is another dead end. Right will bring you to an iron chest in an alcove, which has the knight armor set.

Go back down the stairs and continue to the lowest level. Go left and go to the end of the hall, you will find a broken wall. Go through it and follow the path. It will lead you to another bonfire. Lucatiel of Mirrah is there as well. If you continue on past this bonfire, you will end up in No-Man’s Wharf. 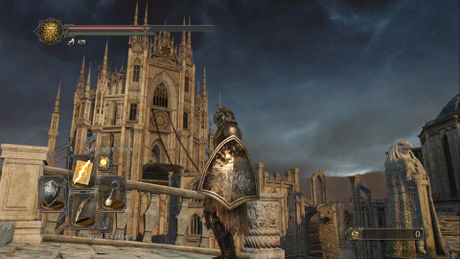 Head back the way you came until you return to where those three knights stood guard in the round tower room. It’s time to go down the left hand path. There will be two more enemies waiting.

Go down the dilapidated staircase that leads down toward the water. You’ll find a corpse with a divine blessing. Head back up and go up the other set of stairs. You’ll find yourself on a platform with a single knight.

There is a lever that will lower the bridge, allowing you access to the Cathedral of Blue area and the Old Dragonslayer boss fight. Go across the draw bridge. To your left will be a corpse with an old radiant life gem and an iron chest with a ring of binding and five human effigies.

Once you enter the building, you’ll be in the Cathedral of Blue and can face the Old Dragonslayer. 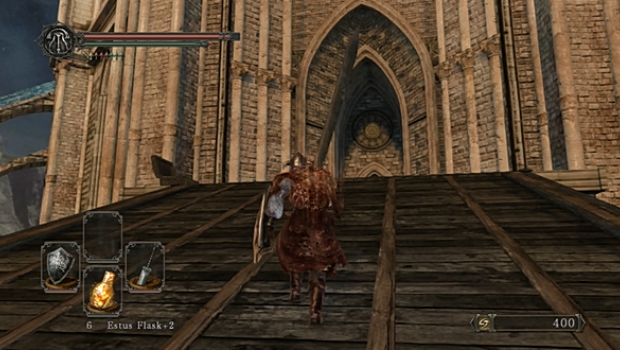