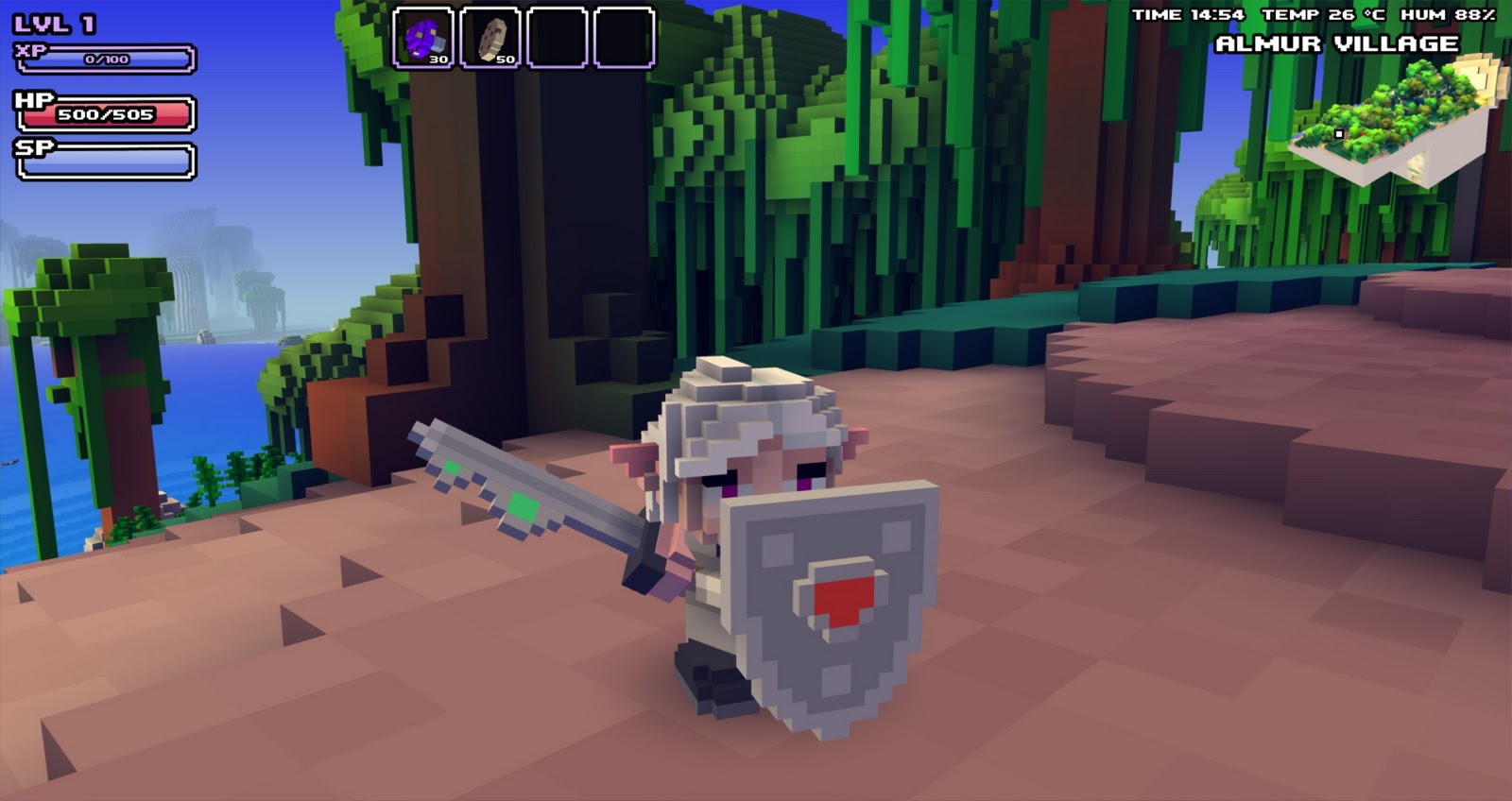 If you haven’t heard of Cube World yet, then you’re already missing out. If you ask me, Picroma nailed it when putting together the ideas for Cube World. Rolling in the popular open world RPG mechanics of MMORPGs into a Minecraft style environment sounds like nothing but awesomeness. Cube World has just entered its alpha testing stage, but unlike most games it will be running it as an open alpha phase. That’s right, you can get your hands on it to play right now! So, let’s break it down to its voxel-based DNA and see why it’s worth checking out.

Character creation in Cube World will be plenty familiar for anyone who’s played a class-based RPG in the past. First thing to do, is to decide your race. Cube World has an impressive selection of races already in place, ranging from the generic Human, Elves, and Dwarves; to the more interesting Goblins, Frogmen, and Undead. Each race has both female and male variants as well as customizable appearance. As of now the races in Cube World are only aesthetic, but I’ll never complain about having more options for making my character unique.

Now you have your blue eyed Frogman, but what class is he? Cube World has stuck to the classic break up for their classes. Fighter, Ranger, Mage, and Rogue, make up the initial selection of classes to choose from. Each one of these also has two specializations that you can choose from in order to further customize the class. As an example, the Fighter can select Berserker or Guardian as it’s specialization; The Berserker can attack faster and charge attacks faster, while the Guardian has higher health and can block better.

As your blocky hero moves forward, slaying all sorts of beasts, he’ll be leveling up. Unlike many games, leveling in Cube World is technically infinite. It’s impossible to reach the highest level of power, instead as you move higher in the levels your ability increases become more and more negligible. This allows you to keep getting the satisfaction of that, “level gained” even if you’re not gaining much from it. With each level your hero gains a skill point to place into his skill tree. These trees contain class-specific skills, like spells and attacks, as well as general use skills like climbing, hang gliding, and pet riding.

Speaking of heroes we can’t ignore getting them up to snuff with awesome gear. Like any RPG you’ll be able to change the equipment that your character is wearing and wielding. These are things like jewelry, armor, weapons, food, and potions. Not only can you score awesome gear exploring the world and killing monsters, but you can craft it yourself. Using recipes and ingredients from around the world, you can create just about anything you could loot while adventuring. Upgrades and enhancements are also available for your equipment, increasing their power or altering what element their imbued with.

Cube world has also incorporated a pet taming system. Don’t worry, you don’t need to be playing a Ranger in order to tame a pet. Obtaining pets is available to all classes, which is a nice change from most RPGs if you ask me. The pets fall into different classes like: healer, tank, mount, melee, and ranged. Just about any animal you find in the game can be tamed by feeding the beast it’s favorite food. At some point they plan to implement pet evolution as well, which has me particularly interested as a Pokemon fan.

A World of Cubes

One of the main features of Cube World, and probably the coolest, is that its map is randomly generated. You’re never going to go to the same place twice, which should lend itself to keeping the game from getting stale. Thanks to this random generation, there are no borders in the game. That’s right, Cube World is technically infinite. You can just keep wandering and exploring the world ad infinitum without issue. These are broken into different landscapes like mountain, rivers, dungeons, forests, etc…

If you didn’t notice one of those landscapes I just listed was dungeons, then go have another look. Cube World will be randomly generating dungeons, catacombs, temples, towns, and more, as you play through it. So, if you were worried about missing out on the classic dungeon delving experience of RPGs, then fear not. You’ll have infinite dungeons to explore, while never having to go through the same layout twice. The world will literally be springing up from nothing as you make your way across it. This makes exploration even more fun, as you’re never sure what’s going to pop up next.

With an infinite world, there must be an effective way to get around, right? You’re correct, Cube World features several methods of travel to get you around your blocky landscape. Up high? Why not throw on a hang glider and clear some ground with a bird’s eye view. If you’re a pet collector, then hop on the back of your mount pet and let him carry you across the world. For water travel, there is sailing, diving, and swimming. The ways you can explore Cube World are impressive, and look like a lot of fun.

Cube World features an action oriented combat style reminiscent of the Elder Scrolls games. When in combat you’ll actively aim, dodge, block, and attack. Special abilities will allow you to stun enemies and soon they will be incorporating crowd control abilities as well. Particularly skilled players can use the combo system to help them down powerful enemies. The more hits you land consecutively, the more armor and magic resistance you penetrate through. If you’ve got the timing and skill to dodge and combo up a storm, then you can take down foes well above your power level.

The Building Blocks of Friendship

Multiplayer hasn’t been forgotten in Cube World, and that’s very exciting. Open World RPGs like Skyrim have always left me feeling like a wish a friend could come along on the adventure. You can explore Cube World with up to four players over local area network or an internet connection. They plan to bring out massively multiplayer servers in the future, as well as player versus player servers.

All in all, Cube World looks like an awesome way to spend a ton of time adventuring with friends. I can’t imagine why any RPG fan wouldn’t want to check this one out.

What are you waiting for? Start exploring Cube World’s alpha phase right now!