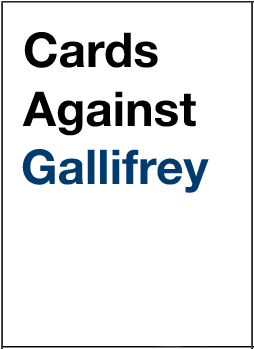 Ah, Cards Against Humanity– the card game perfect for entertainment at parties and showing off what a depraved, insensitive cretin you truly are. Described as “Apples to Apples for horrible people” and marketed as “as despicable and awkward as you and your friends,” (not to mention chock full of pop and geek culture references,) it’s no wonder the card game has become a staple in the game closet for a fun night in with your closest (adult) pals.

Great news, though–if you happen to love Doctor Who, the game just got even better. Thanks to Conventional Improv, an improvisational theater troupe that specializes in performing skits based on con culture and geeky references, it’s now possible to download a Cards Against Humanity deck tailored around the show: Cards Against Gallifrey. Chock full of references to all eras of the show’s 50-year run–its actors, its characters, its weird wibbly-wobbly quirks–Cards Against Gallifrey combines fans’ love of the show with Cards Against Humanity’s penchant for immaturity, raunch, and a terribly good time. Even better news? Conventional Improv’s complete card pack with both black prompt cards and white ad-lib cards are available online, via dropcanvas, for free, meaning you can start planning your next game night immediately.

Some of the cards in these packs are from official Cards Against Humanity packs, but many are also fan-submitted or made up specifically for the panel. Before a convention, Conventional Improv will open submissions for black and white cards via social networking like Twitter, giving con-goers the opportunity to contribute to the panel and the chance to see their cards played during the actual game. There are, of course, certain suggestions for the types of cards con-goers can submit that are outlined on the submission page:

-Anime themed is fine. Just don’t make it too specific.
-Con themed, also fine.
-Hell, if it’s geek related, throw it in.
-Don’t try to fish for certain cards or answers with your submissions. Sometimes the funniest combinations are the ones you don’t expect.

The audience receives thanks and credit for the cards at the end of each panel. Cards for past panels can also be found occasionally on Conventional Improv’s Facebook page, for free. “We always release everything we do for free,” says John Bressler, CEO and Founder of Conventional Improv. “We’re a volunteer group; we don’t get paid for this, so why should we be charging money?” That, and the Cards Against Humanity copyright allows the remixing but not the sale of the game or its cards by outside parties.

The panel became so successful that the troupe was invited to Doctor Who 50 PDX in Portland, a mini-con, for which the specific deck Cards Against Gallifrey was made. It was one of the most-attended panels in the entire convention. Bressler was overwhelmed by the success of the panel, as well as the resulting attention the Cards Against Gallifrey deck has received online. “Not all of us are Doctor Who fans,” he admitted on his Youtube channel, “but we had a great time putting this together for you.” And the fans are surely appreciative; since the release of the card deck via dropcanvas, the troupe’s Facebook and Twitter have been active with comments letting the improv group know exactly how thankful for the expansion fans are.

@AllGeektoMeNet @CAH We love you too! No tongue this time, though.

Along with expressing his thanks for support of Cards Against Gallifrey and Conventional Improv as a whole, Bressler also had an exciting announcement to share with con-goers and “horrible people” alike– the group will be releasing another free, geeky expansion fan-pack in March: the Pokemon themed Cards Against Kanto, a “game for horrible trainers”.  Unlike Cards Against Gallifrey, this fan-pack will not be associated with any specific convention, but will consist of 18 black cards and 81 white cards based around Nintendo’s Pokemon franchise. “And no, there will not be two versions,” Bressler jokes. “We’re not going to make you miss out on a couple of cards like they do in Pokemon.”