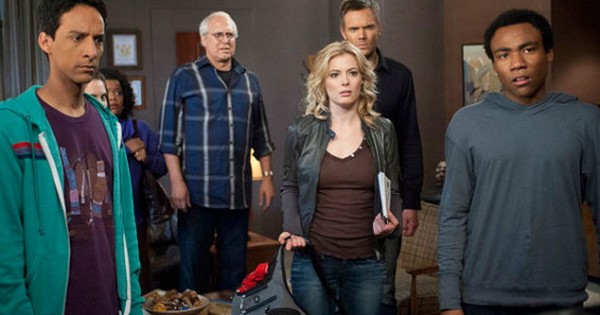 It seems like only yesterday we were being introduced to the likes of the self-centered Jeff Winger, the overachieving Annie Edison, the overbearing Shirley Bennett, the racist Pierce Hawthorne, the childish Troy Barnes, and the meta-fictional Abed Nadir.  It seems so recent in our collective memory that we were first welcomed by the statue of Luis Guzman into the chaotic campus of Greendale Community College by a dean who frankly needs psychological help.  It seems that our turbulent five years full of dungeons and dragons, paintball, chaos theory, pillow fights, movie references, meta-humor, losing the show-runner, and getting him back again are finally coming to end.  For it is now canon, that all of these characters are dead.

For those not in on the joke, Community has recently been canceled by NBC, and according to one final 4th wall joke by Abed, the entire school was hit by an asteroid, killing everyone simply because they were not given a sixth season.  The show was on the chopping block from the very beginning but as we inched closer and closer to the trademarked “six seasons and a movie” many fans were holding out for an ending without any loose ends on par with the end of The Office or 30 Rock.

Unfortunately, that was not the case and we were left with a final season that was new and unique, but failed to measure up to the first three.  The final episode was good enough for a season finale, but it alluded to greater stories in the sixth season that we will never see.  So why is it that the show was ended here even when ratings increased from last season?  What are fans to do now that it’s over?  And is there any hope of finishing this show off right?

Firstly, it’s important to know that it’s not your fault.  We fans were loyal until the very end and even if you skipped on this season it didn’t make a big difference.  Community was not a ratings giant even at its peak.  The Nielsen boxes that companies use to try and measure who is watching what shows don’t count the dorm room and Hulu views that make up the majority of Community’s fan base.  Community also has no problems going outside of what its audience expects or even wants.  It was subversive, clever, and unique: the qualities that accrued a cult following but lost the larger demographics.

Other factors besides ratings factored in as well.  Dan Harmon was notoriously difficult to work with because he knew what he wanted and refused to deviate.  More than a few times he would poke fun at the executive decisions that were hurting the show such as delaying episodes and moving the show to a worse time slot.  Another theory points to more behind the scenes issues.  Community, unlike some of NBC’s other shows was licensed to the network through Sony TV so the cancellation may have been an attempt to cut ties with the company or end some kind of dispute.  Regardless, these were all factors that couldn’t be helped by word-of–mouth campaigns to get your friends to watch or turning on all the TVs in your house to NBC.  Community was dead before it hit the ground.

So what now?  I just wrote an article a few weeks ago when season 5 ended asking the same question, but now it seems bittersweet.  In that article I read Community through Dan Harmon’s plot wheel to try and predict what was in store for season 6, which we now know will never come.  But as fans, we don’t get to choose the ending we get.  We can fire our head-canons into the air with wild abandon and speculation on what might have happened, but it doesn’t change the fact that Greendale is canonically crushed under the weight of a giant asteroid.  We Greendalians need to move on to greener pastures and simply remember fondly the memories we shared with the Greendale Seven and all the characters they met along the way.

While NBC seems to be running out of sit-coms at a ridiculous rate, dropping both Community and Parks and Rec this year (Seriously, what do they even have left?  The Michael J. Fox Show and nothing else?) there are still a few places to get your comedy and meta-fiction fix.  To start, why not check out the Untitled Web Series About a Space Traveler Who Can Also Travel Through Time (UWSAASTWCATTT), the parody of a parody of Doctor Who with the actor of Inspector Spacetime from the show-within-a-show of the same name on Community.  Yeah, it’s confusing, but that’s why you’ll love it.  They seem to be working on a movie of uncertain length with guest stars from Star Trek: Voyager and even a former Doctor.  Also, although animated and not quite as witty as Community, Rick and Morty was co-created by Dan Harmon and shares his love of zany sci-fi tropes and meta-humor.  You can watch it on Adult Swim where it continues where Community left off subverting expectations and having fun.  If neither of those catch your fancy, Comedy Central has been given re-run rights so you can rejoin the study group there.

Now, I know what you’re thinking.  You’re thinking we all have to bombard Netflix with messages showing how dedicated we are as fans.  Well we already tried that.  A huge Reddit movement broke out when the announcement was made in the hopes that Netflix would pick up the show for a season and movie like they did with Arrested Development.  However, this decision was made without knowing the facts.  Hulu owns the right to stream Community in the U.S. so there’s little to no chance of Netflix acquiring it without contract disputes coming up.  If you want the show to continue, send your petitions to Sony TV and Hulu, as they own the rights to distribution.  If there was ever a time where the show could continue on after death it is now.  With streaming sites desperate for college-aged fans and original content, Community is the perfect blend of existing fanbase and rewatchability they’re looking for.  If we’re lucky, we might just get six seasons and a movie after all.