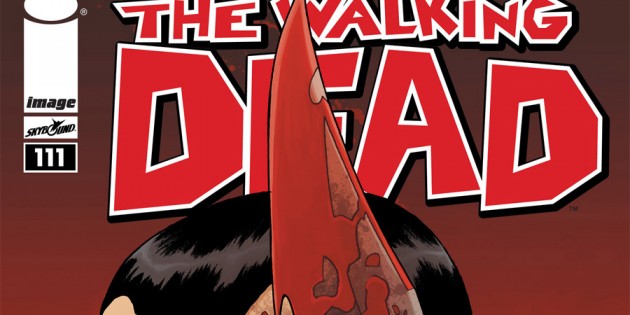 I’ve always felt that the best comic book series are the ones that I could imagine watching unfold during a really good television series. The odd thing about The Walking Dead is that it actually has been made into a television series. That series is pretty good, but at this point isn’t much like the comic book series. I’ll always wish that the series had taken more of an approach like Game of Thrones and stayed truer to the comics. Issue #111 is one of those books that I would really have liked to have seen on the big or little screen. This particular issue has everything one could look for in a series that is built on building suspense. There were twists and turns and a great surprise at the end of the book, one that has me waiting not-so-patiently for issue #112.

The Drumbeat to War

The Walking Dead’s issue #111 continues a storyline that has been running for quite a few episodes. Rick and his crew are tired of trying to live under the tyranny of Negan (though they really hadn’t lived under that tyranny all that long.) Rick and his group are pretending to be out on a scouting mission for supplies to give to Negan while they are actually looking to form an alliance with Ezekiel and his “kingdom.”

Actually just a former zookeeper, Ezekiel carries himself and talks as though he was a medieval king and he has a tiger as an apparent pet/friend. He also has followers that we find in this episode can hold their own when it comes to combat. This is important because the people back at the Hilltop don’t appear to be all that ready to start a war.

One of the running themes throughout the issue is the demonstration of what real leadership in this “brave new world” looks like compared to someone who is nothing more than a figure head. While Rick, Ezekiel and even Negan are actually well respected leaders and warriors, the Hilltop’s official leader is Gregory.

In The Walking Dead’s issue #111 there is a distinct difference to the way the warriors and the people who would do anything to avoid a war. Gregory is held up as someone who is more than just creepy and odd (as portrayed in previous issues) but someone who is not particularly respected around camp. The Hilltop seems to allow Gregory to stay as their leader only because no one else really wants the job.

Leadership and the way the characters carry themselves who have the leadership roles has been a recurring theme through the entire series. Despite the fact that The Walking Dead world has very little in the way of an established government, the men and women who are at the head of the various groups have all fallen into one of three groups, they’re either well meaning and strong, evil and strong or incompetent and soon to die.

The Arrival of the Saviors

While Rick, Andrea and Jesus think they are pulling the wool over Negan’s eyes, the Saviors have just thrown a bit of a wrench into their plans and it doesn’t appear that Negan knows that his actions have changed things up quite a bit. Not surprisingly Negan’s stay at the camp is less than uneventful and during his stay is when a pretty significant twist takes place.

The twist may not actually lead to a huge change in The Walking Dead comics story evolution, but it does give us pretty significant insight into several of the characters’ morals and values.

Bring On the War

If there is one big drawback to issue #111 and the issues that came before, it is that the story is moving along rather slowly. Luckily, the way this storyline is moving along, this comic actually did build up quite a bit of drama and suspense. The big question is whether or not all that buildup is actually going to get a payoff in issue #112.