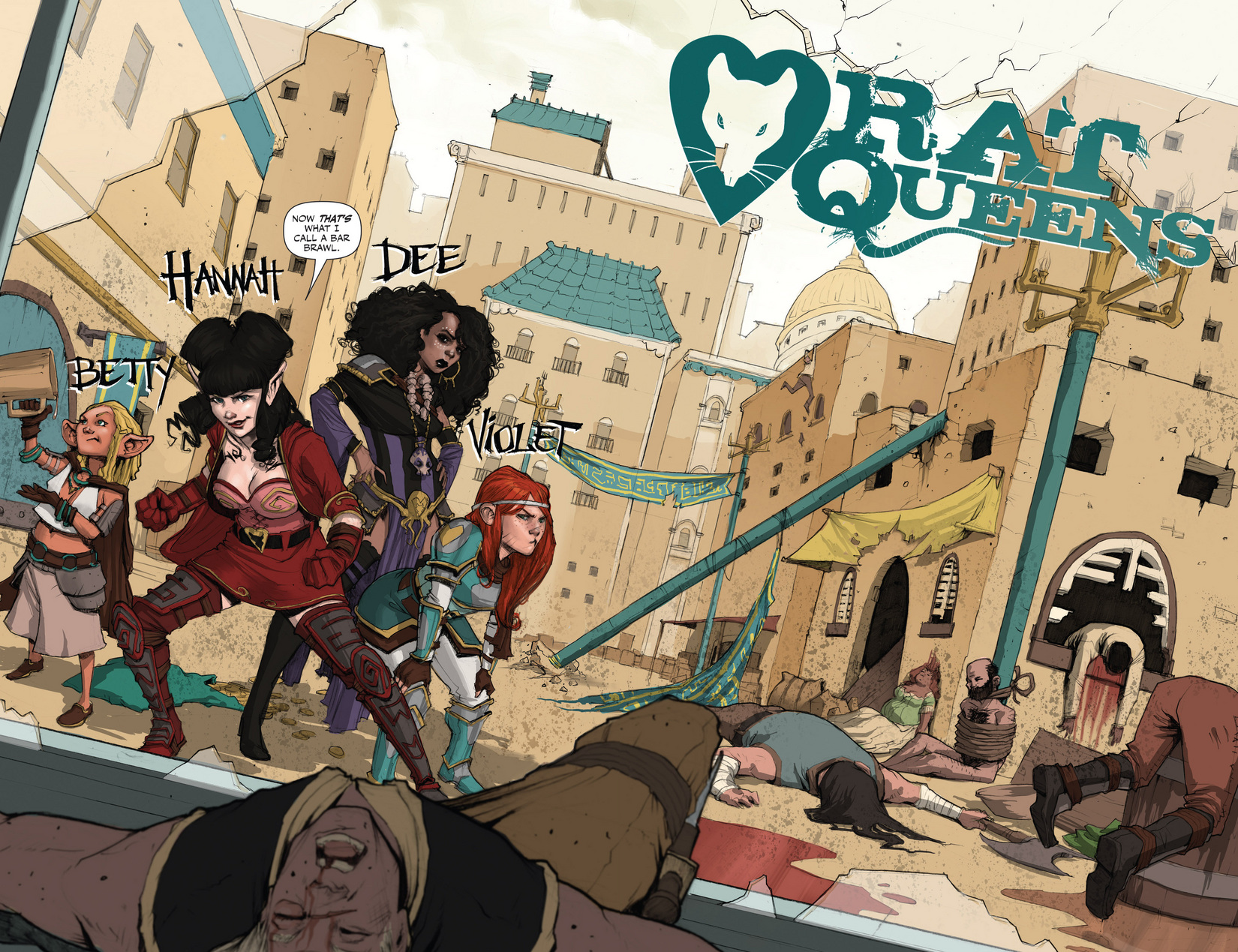 Whenever a television show goes on holidays, no matter how amazing the cliff hanger, no matter how awesome the story was leading up to before everything got shut down for a few months so the writers could relax…. You wonder if it’s still going to kick your imagination in the squishy bits when the show gets back.

Comic books are sort of like television shows, but mainly they happen on pages, not on televisions.

So- is The Rat Queens still as fresh and feisty as ever?

The Rat Queens #5- Someone Dies And Other Unexpected Stuff

By now The Rat Queens #5 should have hit the shelves wherever you are. If it hasn’t yet, then I suggest a strongly worded letter to your comic book store, outlining why they’re killing your soul by not providing you with all the pretty things.

When you get your hands on Issue 5, just be aware that it’s like The Rat Queens never took a break. It rockets you back into the action like a pig in a catapult (Malifaux tabletop gamers know what I’m talking about) and hits with 10+ Accuracy at any worries you had about The Rat Queens sucking. Wiebe and Upchurch are back in full force.

Without giving too much away because spoilers are the opposite of cool, in Issue 4 The Rat Queens were being bombarded with swear words and pointy things. Even with the help of the Four Daves, things weren’t looking good. Sure, the girls could get out of this alive, but whether they were going to get out of it with all their limbs in tact was a completely different issue.

It only takes a few pages into Issue 5 to realise things aren’t going to be getting better. Their situation is dire. Not dire like a wolf, dire like “You’re a Stark and Joffrey is Deciding Your Fate”. The girls are in a whole heap of trouble, the supply of magic is tapped and then, there’s a fateful arrow that hits someone much more important than some random adventurer and hits them somewhere a lot more vital than the knee. Cue the screaming and the anxiety that maybe EVERYONE is going to follow George R.R Martin’s lead and just start killing of ‘main characters’…..

This is where conflicting emotions may arise for you, the reader.

As connected as you may feel to The Rat Queens, it’s hard to hate Upchurch and Wiebe for hurting them, even if one of your favourite characters is currently taking on the role of jammy pin cushion.

It’s because Upchurch is a master of blood and gore, so it’s hard to even dislike the most brutal of scenes. Sure, you HATE that the character you were just getting to know and really like is spurting blood all over the place. But at the same time, you’re wiping your face because he drew it so well, you think you might have some of their blood in your eye. The only thing Upchurch draws better than bloody bits, is women’s bodies (he seems to be able to do all manner of shape and size). At his very best though, Upchurch not only draws women well, he draws them making bits bloody. When one of the Rat Queens is oozing her way towards death’s doorstep….Oh boy, do bits get bloody. Especially if you’re a boy….

There’s not a lot of speaking during the fight scenes, but the tidbits of Tank Girl-esque swear words are the perfect icing petals on a cake of awesome.

But Wiebe hasn’t been slacking off!

The Rat Queens isn’t all just fighting, drugs and sex….. I mean, that’s what the girls are about, but the actual comic is sometimes about other things too. In the case of Issue 5, there’s another back story partially revealed and a very interesting discussion on beards.

Oh and a burgeoning darkness is about to caste it’s shadow on all of Palisade and the Rat Queens have unwittingly had themselves caught up in it. I guess we have to wait till Issue 6 to find out about that one.

This is a good bridging issue, with enough blood and death to keep me in mourning until the next issue.

3 and a half dwarf beards out of 5