Eating spaghetti while watching Bones was a mistake, but it paled in comparison to the grave error I made in watching Fringe while eating chick pea soup which, apparently, strongly resembled the brains melting out of an unfortunate man’s orifices. I learned the hard way to never watch the show at dinnertime; the science fiction masterpiece contained some of the most disgusting sights many of us will ever have the misfortune of beholding. Here, for your enjoyment, are the slimiest, stickiest, squishiest, and squirmiest moments from the simultaneously gross and oddly beautiful Fringe. 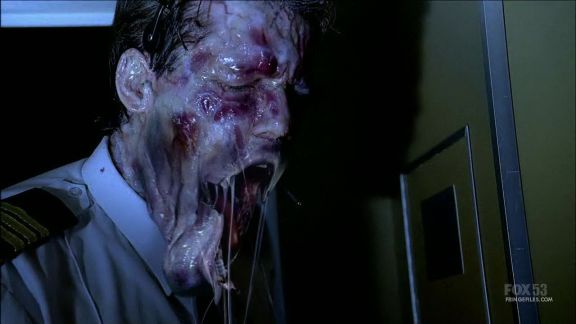 Fringe started with one of its most disgusting moments in the entire series run. After watching the flesh melt and slide off people’s bodies, I stopped watching and didn’t start again for two years. Eventually I learned to embrace the horrifying aspects of the show, realizing they were part of it’s really, really weird charm. I’m just glad that the toxin that causes people’s skin to fall off doesn’t actually exist.

I just jinxed myself, didn’t I?

It really does look like chick pea soup. I was never aware that liquefied brains are a sickly greenish-yellow color, and I’m not particularly glad to know it now. On the bright side, I will never ever open any mysterious link that pops on my computer screen.

It is my opinion that humans’ heads should remain attached to their bodies by their spinal columns. Spinal columns should not be exposed and gnawed on like a dog toy.

2×01 Shape shifters bashing in their own faces

Seeing the monsters smash their own faces into an unrecognizable mass of skins and bone shards always made my own face hurt. It was nearly enough to make me feel sorry for the unfortunate cyborgs. Nearly.

Like most people, I have a phobia of giant screeching worm/squid thingies. They’re just not the cuddliest creatures I know of. Maybe it’s the screeching. Or the lashing tentacles. Or the way they burst out of people’s throats and stomachs. It’s probably a combination.

Something about a guy sitting in a chair, making conversation while his scalp is peeled back over his neck and his brain is half exposed really gives me the heebie-jeebies.

I think I speak for all women when I say oozing, mutilated skin stuck full of scary looking tech is not a big turn on. I’m glad his fiancé never saw him looking like Frankenstein’s monster.

Goo and slime are two of my least favorite things, second only to giant baby Voldemorts that talk in creepy man-voices.

JUST DIE ALREADY. You have a giant gaping hole where your heart used to be! (I can relate. v_v)

5×05 Peter sticking observer tech into his own brain

This wouldn’t have qualified on grossness alone if it were any person other than Peter shoving foreign tech into his head, but there’s something particularly horrifying about a character I know and love cutting open the back of his neck and allowing a scary metal bug to burrow into his brain.

Shudder Adds More Movies to Their Library in...

Supernatural: The Fifteenth and Final Season On Blu-ray...