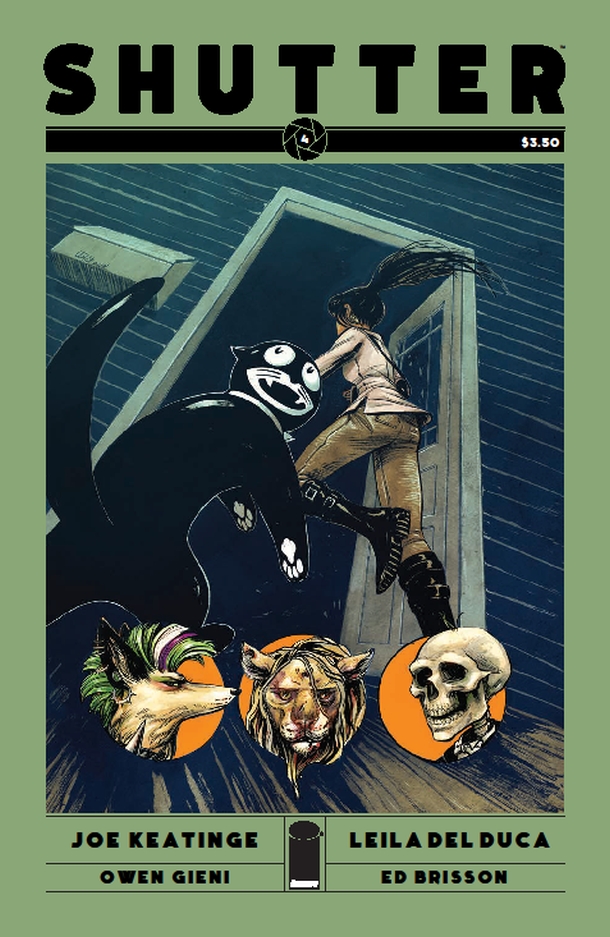 A violent platypus, a cursed skeleton and ghost ninjas who really aren’t that bad, are they? It must be Issue 4 of Shutter.

Shutter #4: Because of course an angry platypus

I’d like to tell you that events in Issue 4 of Shutter escalate quickly, but I’m not sure this story has ever actually taken the time to slow down. Once more, we’re rocketed into the bizarro world (that looks a little like a nightmare Richard Scarry would have had) and things only stop getting weirder and more violent, once you finish the last page.

To start with, this comic is getting harder to follow. The storyline itself doesn’t seem too difficult to keep up with, the story telling itself manages to keep a pretty firm hold on the plot. But the placement of the panels are becoming more and more erratic. So, it often feels like the story is jumping around more than it actually is. This is a good and bad thing. Good because it’s realistic. Conversations don’t flow smoothly, especially when someone’s yelling “Just tell me what’s going on!” and the panel organisation shows that. It lends to the chaotic feel of the Shutter universe in general and Kate Kristopher’s particular situation in specifics. But it’s also bad because the Shutter universe is already doing enough of a mind bend, without having to work out which panel to look to. It’s not a big enough problem to warrant putting down the comic and never reading it again, but it just feels messy and I don’t like it.

Still, for all the mess it seems done for a purpose and even if it’s not, you can forgive a few ‘messy’ panel placements. Leila Del Duca’s work is just getting better and better. Her work with Gieni is exquisite. The first few pages are done in muted tones, basically black and white, and it looks stunning. When a wider palette of colours is introduced, it absolutely smacks you in the face. But then, that’s Gieni and Del Duca all over. They don’t just nail it. They bring the nails, the nail gun and then spray their message on the wall in no uncertain terms. From flashbacks, to memories, to the anguish in Kate Kristopher’s eyes, the marriage of lines and colour is exactly how it should be.

For all the artwork, it’s easy to forget there’s a story going. I feel like a jerk for saying it, but most of the time while reading this, I didn’t really care about the story. I mean, it’s a nice accessory to all the pretty colours, but it’s not something that was driving the decision to turn each page.

The story is progressing nicely, though it’s fair to say that Issue 4 is a bridging issue. It’s more about showing the back story of the characters and establishing suitable suspense which I hope pays off in Issue 5. It’s an issue that needed to happen, as the first three have had little explanation as to the ‘whys’ and ‘hows’ of the Universe. Issue 4 gives us some answers, while creating even more questions like-“Hey, where’s Kate’s mother?” (which may actually be as big of a mystery as the mother of Jon Snow) “Why is that platypus so mean?” and “What sort of card games do ghost ninjas play?”

In fact, Joe Keatinge leaves enough questions unanswered at the end of Issue 4 that it will be interesting to see how he answers them in Issue 5. It does have the very real possibility of turning out to be not that interesting, or horribly convoluted to the point of readers throwing up their hands and saying “But I don’t actually care!”. And that’s a gutsy risk to take.

This isn’t the finest issue they’ve done for Shutter. It’s by no means a flop, but I like comic books that hint at something in the future that will be even bigger and better. It has all it’s pieces in place and if done right, this could be an awesome series to follow and Universe to explore for a great many years.

8 out of 10 curses of immortality and servitude…