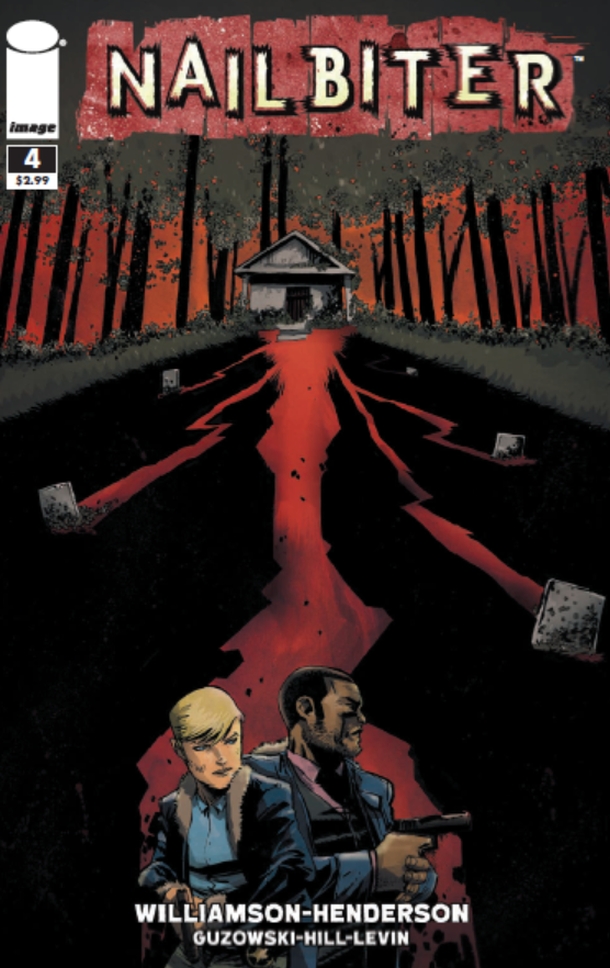 If Nailbiter 3 left us hanging off the edge by our fingertips, Nailbiter 4 chomped the ends of our fingers off and let us fall. This is some seriously deranged work….. Why aren’t you reading it already?!

NailBiter #4:  If You Go Down To The Graveyard Today….

Clichéd stories are usually terrible. Clichéd stories that are meant to frighten us? I believe they made a whole comedy series about those (Scary Movie 1 to….Please tell me they stopped making them after 3). So, when I tell you that Nailbiter 4 mostly takes place in a graveyard, contains Silence of the Lambs references and words along the lines of “But he was such a good boy,we were shocked when he turned out to be a serial killer”, it would be natural for you assume that Issue 4 is full of clichés. You’d be wrong, but it would be natural to assume that.
It would also be wrong for me to give anything away.

Just trust me, when I tell you that Joshua Williamson is kind of fantastic when it comes to taking the old and busted and making it into the new hotness. Each issue seems to bring another Buckaroo serial killer out of the woodwork. So, by issue 4, I was looking forward to seeing which twisted individual was next to splatter their way into the spotlight. I was not left wanting, not by the killer and not by the way they were presented to me, as the reader. It’s been mentioned before, but Williamson really does seem to engage as many avenues of story telling as possible through his work. It keeps things interesting and is constantly shifting the perspective, so you receive a much more rounded view of the world he’s created.

Speaking of that world….What colours are in it!

Adam Guzowski does red well. There’s actually quite a bit of red within Nailbiter 4 that isn’t blood (shocking, I know). But for each shade of red, Guzowski matches it with it’s function perfectly. When he does draw a bloodied scene, the red isn’t all one shade, it’s varying layers. When you think about it, it’s actually quite grotesque but relevant to the work that’s being done. The Nailbiter universe’s colours are on a very restricted palette, yet those colours are time and time again used in a way the brings a real depth to the scenes.

It helps that Mike Henderson, especially in this issue, excels himself. He and Guzowski are a great match, but the best examples of this are when they’re creating a visual that doesn’t need many words around it. Much as Williamson’s words are great, it’s good that he can step back from filling up boxes with dialogue to let the artists get to work. As the picture that best sums up this up is buried deep into Issue 4, I’m not going to tell you what it is they’ve created, only that it’s both disgusting and impressive. The use of darkness and light, red against pale, only one word uttered (give it up for John J. Hill the letterer, dude got skillz) and it’s just a hot mess of disturbing imagery done right.
Nailbiter 4 is just the 4th reason why you should be picking up the Nailbiter series. It’s hotting up and you’ll only have yourself to blame if you miss out.

Boyhood: A Look at Nostalgia and Millennial Geeks