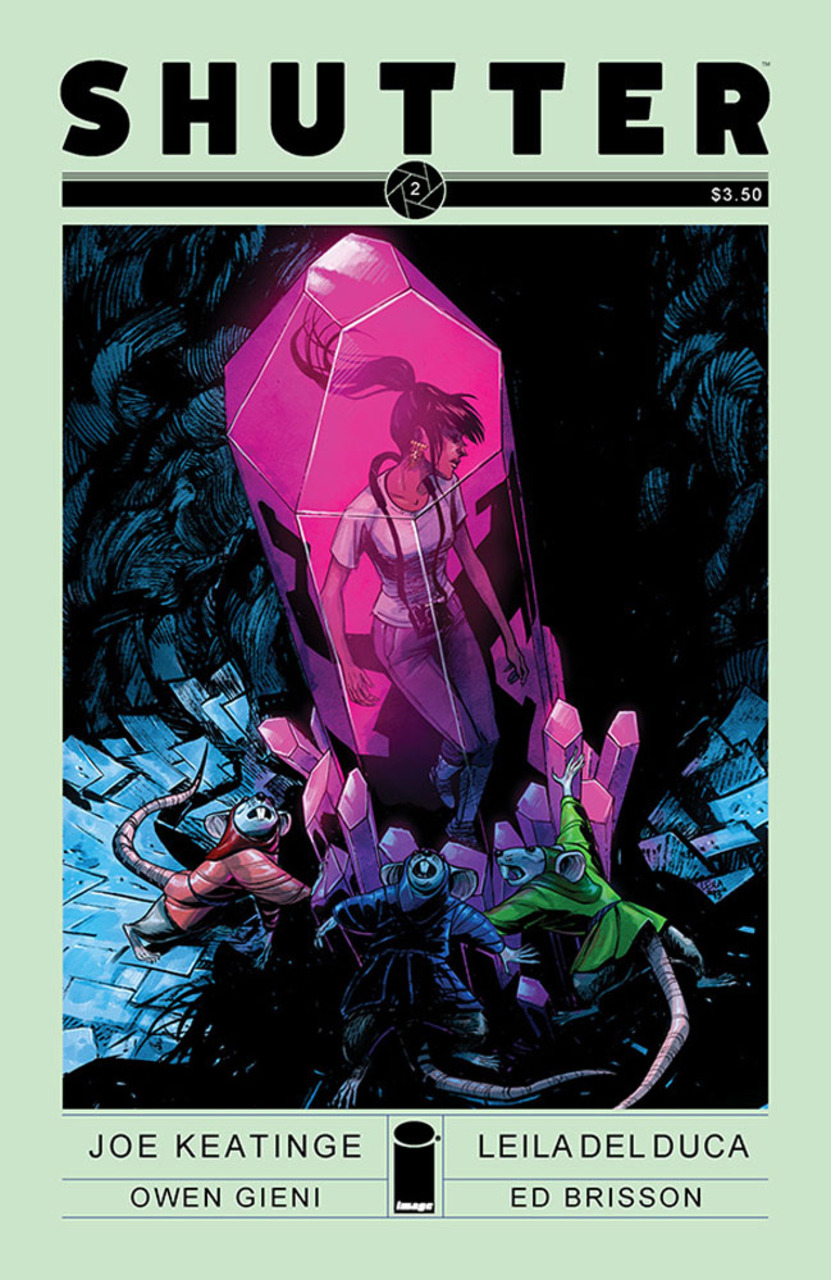 Shutter Issue 2 is as beautiful as it is confusing and it’s really, really beautiful.

Picture a futuristic Animalia, where all the robots look suspiciously like they escaped from the Jetsens’ universe. Throw in the Dark Crystal from The Dark Crystal and you have a basic idea of what this issue of Shutter contains. Confused? Yeah, well reading it won’t make things much clearer. But confusion is the spice of life and the Spice must flow.

Shutter 2: The Kind of Confusion You Can Learn To Love

It was an assault on all things expected. It was unapologetic and just too darn busy to explain itself. A picture can tell a thousand words, so it’s a good thing that Leila Del Duca is a talented artist, because that’s sort of the only way readers can work out what’s normal and what’s not.

Pro Tip: Flying gryphons and baby dragons in place of pigeons= Normal.
Ghost Ninjas= Decidedly less normal, which is a little surprising when you consider what passes for ‘Normal’ in the Shutter universe.

Issue 2 finds us splat bang in the middle of this Universe where we’re not sure what’s going on and it doesn’t bother to slow down long enough to explain the ‘why’ of things.

As a reader, I love Shutter and it’s crazy “take me as I am” approach. That there is no explanation for why there are lions with rat-a-tat-tat guns, is refreshing. It’s nice to have so much to marvel and question, without getting the answers straight away. For someone who doesn’t like intrigue, I’m finding the lack of spoon-fed information in Shutter to be strangely entertaining.

But the critic in me isn’t as sure. Shutter doesn’t lead the reader through the world and I worry about what that means for people picking it up for the first time. As far as I know (and feel free to correct me) this is the first time we’re seeing the Shutter Universe. It makes it harder to just slip into this sort of world, without some explanation or even acknowledgement that it’s not like ours. They’ve created something that feels unique, it’s not built on any pre-existing acceptance of strange (like mutants in the Marvel Universe or orphans with loads of cash and a love for gadgets who grow up to be superheroes in the DC Universe). Due to that freshness, it makes the Shutter universe a little harder to accept without some acknowledgement that things there are different to say….Our world where flying saucers aren’t a mode of transportation.*1

It is just a small thing though. The world the Shutter team have created is wonderous and perhaps the lack of explanation is part of the beauty of it. I don’t know that they could get away with it without the talents of Leila Del Duca. The amount of detail she puts into the backgrounds, the way she uses the space afforded to her, makes the world all the more enthralling.

That’s not to say Joe Keatinge isn’t doing a great job as writer. Yes, scenes are confusing. But Keatinge anchors the reader with the developing storyline of Kate Kristopher, the plot that’s twisting around her ankle and about to drag her down. Even if it’s a slog to try and adjust your head space to attune to the Shutter Universe, it’s a slog Keatinge rewards you for.

Shutter Issue 2, for all the confusion, is well worth picking up. Don’t skim, or you’ll miss something important, but take the time to immerse yourself in what’s shaping up to be a very interesting Universe.

7 unexplained animals in people clothes, out of 10.
*1- They do ‘acknowledge’ it in the blurb at the end of the credits, but not the comic itself.