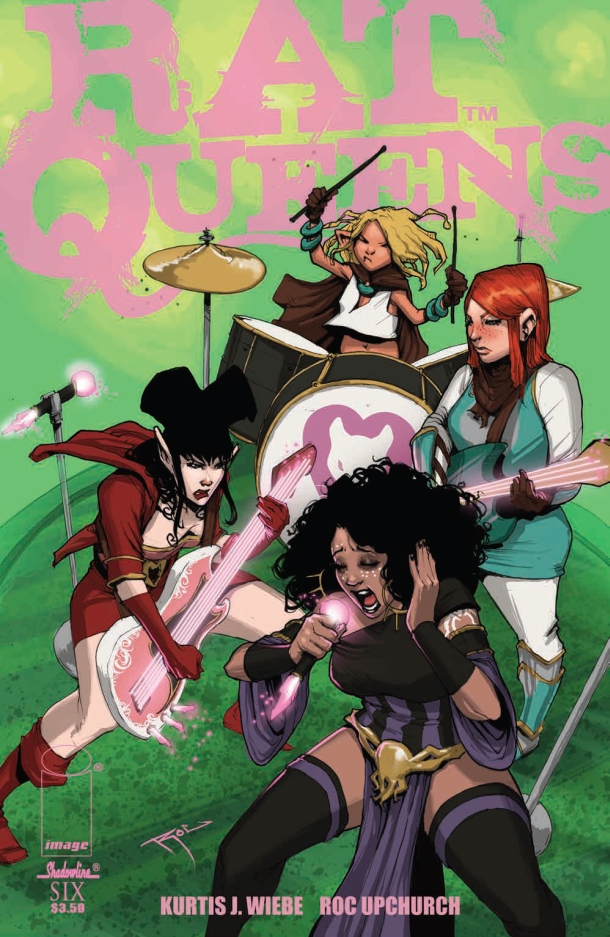 A new character to welcome, people-mushrooms and enough adult references you could drown in them? Has to be another issue of The Rat Queens.

There’s something for everyone in The Rat Queens. As long as you’re one of the everyones who doesn’t mind foul language and mentions of bottoms on a regular basis. If you don’t appreciate that kind of thing, then the Rat Queens is still not going to be your cup of tea. Or your name is Gary.

In this issue, Wiebe proves something once and for all, a dirty mouth doesn’t take away your ability to write one hell of a story!

To refresh everyone’s memory, the last issue saw Palisade under attack from giant orks and the Rat Queens defending the city. There were a lot of tense moments, outweighed only by the blood slicked plot twists that followed.

In Issue 6 of The Rat Queens, the twisting plot is finally beginning to unfold to reveal the bigger picture. It starts out in the standard way, with the Rat Queens dealing with what they did the night before and Sawyer (Captain of the Guard, Hannah’s “friend” and all round dreamboat with a sword) doing actual work. Work that leads him to a whole mess of trouble that is dangerously different from the trouble he was expecting.
Meanwhile, the Rat Queens do what they do best- Just killing stuff, completely absorbed in their own dramas, so they have zero chance of being aware of something really, really incredibly bad happening. Which is good. Yes, I hate the bickering of the group, it’s draining and I find myself wishing the other Rat Queens would make good on their threats to one day slap Hannah with something hard and spikey. But, it’s a literary slight of hand that I fall for every time. I get distracted by their inane banter, that when a bombshell hits it’s like a right hook you don’t see coming!

The Rat Queens has such a slapped together feel with it’s story progression. It’s rough on so many edges. That’s not to say it’s shoddy craftsmanship by Weibe, it’s just more realistic. Nothing feels contrived, it’s messy as the bottom of a boot, the same way the real world is. Except in the case of the Rat Queens there’s a few more wands than you would generally find in the real world.

If plot lines were tentacles, then the bigger picture looks a lot like Cthulu. Also there are actual tentacles in Issue 6.

I would get a Roc Upchurch drawing tattooed on me. This latest issue of The Rat Queens should be as good a reason as to why. There are no actual words for how great his work is, but I will attempt them anyway.

His work with colours, even on the smallest of details (there is a nipple on display, told you this wasn’t for the kids) is beautiful. His ability to draw characters in the rain is delicious. But his real talent, lies in how he crafts each character, rather than treating them like a factory line of pre-assembled body parts.

In this latest issue, we’re introduced to a new character called ‘Lola’. Lola is one of the city guards.

She’s direct, she’s all business and she looks exactly how you would think the second in command to Sawyer would look.

Let me explain something real quick, for a really long time, all adult women in comic books were the same. They might have had different hair, sightly different faces, but their bodies were the same design. To be honest, it wasn’t that much better for the men either.

Lola is yet another example of how Roc Upchurch can actually draw people, not just a cookie cut-out and stick a different head on it each time. Lola has muscles. Not slight hints at ‘well toned arms’. The lady looks like she’s smuggling potatoes under her skin. That’s awesome.

Issue 6 is more than solid, it’s as rock hard as Lola’s arm muscles. It’s the perfect appetiser for what is about to come and if you haven’t gotten into The Rat Queens yet, then I suggest you do so now. The Trade Paperback is out already, so you have no excuse not to catch up on the story line so far.

The Multitude of MOBAs