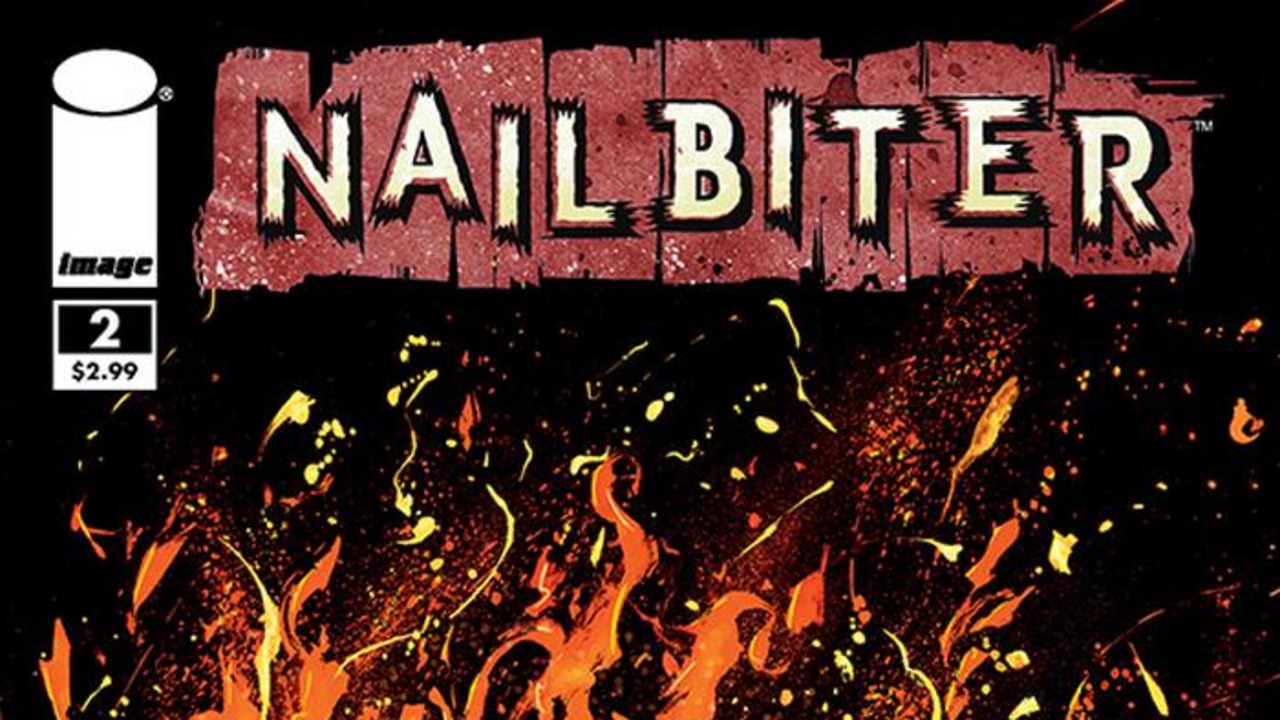 If there was a list of things to turn you off your steak, Nailbiter Issue 2 is definitely on that list and fairly high up. Even if it’s not “Silence of the Lambs” because Warren doesn’t even LIKE Chianti!

Nailbiter Issue 2: Not ‘The Silence Of The Lambs’

In the first issue of Nailbiter, another brilliant offering from Joshua Williamson, we met our main characters and were introduced to the concept of a town that seems to be a breeding ground for serial killers. The stage was set for something bloody and dark to enter.

Something bloody and dark this way came….And now I have to sleep with the light on. THANKS A LOT, WILLIAMSON!

Comic books aren’t films (well, duh, I mean until they’re made INTO films but that’s another mess to deal with). There’s no music to convey the impending doom, no movement so slight you’re not sure whether you saw it, no darkness (because darkness in a comic book is usually just a slab of black ink, that’s not creepy, that’s just a slab of black ink). So, a comic book artist must take it to another level in order to build suspense and fear.

Luckily, whoever makes the decisions to team Joshua Williamson up with these artists is making the right decisions.

Mike Henderson is the man behind the art in this and he just nails it (if you’ll excuse the term). It’s in the little details, in the body language of a cop trying to calm down the people of the town, the placement of hand in a prom photo, the licking of flames around the furniture in a burning apartment. The fact that even the ice cubes look creepy in this town. How can you make an ice cube look creepy? I don’t know, ask Mike Henderson, he’s the one who drew it!

It’s unclear whether someone actually chose to feature hands in so many of the panels. But there they are, hands being used to denote non-confrontational language, fingers threateningly pointing towards some jerk who killed a cow, hands reaching out to be saved. It of course, may just be conincidence. But in a series like this, it’s hard to not take note of every little thing. The slight of hand (sorry!) used by Williamson and the artists to tell the story is skillful.

The muted colours are something most Williamson fans will be used to, especially if you’ve been reading the Ghosted series. It just seems to fit that his stories are steeped in inky shadows and muted tones. Except for the colour red of course because, it’s the colour red. Adam Guzowski is my kind of colourist. It’s hard to see where his work begins and Henderson’s ends.

With the colours and artwork combined, it reminded me of the work I’d seen in “My Friend Dahmer” (“My Friend Dahmer” is a graphic novel written by one of Jeffry Dahmer’s classmates.). It’s of course completely different. But there is something about the skin tones, about the way the characters are represented, that reminds me of it. It’s unclear whether this was intentional or not, but that’s probably what makes Nailbiter all the more thrilling. Whether they’ve researched serial killers, which I’m sure at least Joshua Williamson has, whether they’ve made these stylistic decisions based on gut or that which has gone before, it’s all good. Or horrifying and bloodcurdling in this particular case.

With another obvious hit under his belt, Joshua Williamson should be proud of his story telling ability. This is not just Ghosted but in serial killer genre. This is a story that stands on it’s own, though I can see it fitting into the Ghosted Universe which would be…..Awe….some.

As a second offering it’s a good issue. I think they can do more though. They’re setting up the world for something big, hopefully, and it will be interesting if they can maintain this sense of dread, while not driving away readers. There are some very uncomfortable things already within this series, if they can get the balance right then the team behind NailBiter will be onto a winner.