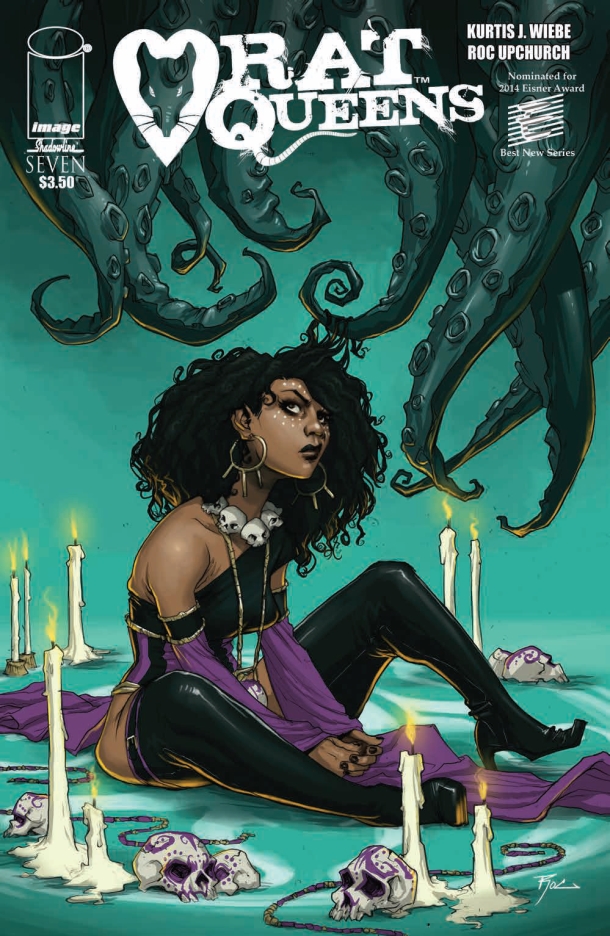 Hannah is still a pain in the butt. Betty noms on people’s heads, Dee is just all different flavours of mysterious and Violet hardly gets attacked at all. But boy, that new Lola character, I think I’m in love…..Must be Issue 7 of The Rat Queens!

The Rat Queens Issue 7 should come with an R-Rating. Not because of the blood, though there is an ample supply of it, but because there is….. /giggles hysterically. There’s rudey bits!

But seriously, there’s a picture of genitalia in there. It’s only one page and you can easily skip over it (not ‘easily’, sorry Sawyer, that’s not what I meant….). But it’s there, so if for some insane reason you were LETTING your 10 year old read The Rat Queens because “comic books are for kids, right?” I suggest either skipping this issue, or answering some rather interesting questions later on.

Apart from that one little (sorry Sawyer) lesson in biology, there is a lot of gore. The Rat Queens is a violent series, with a lot of faces being smashed into gooey piles of the colour red, this week seems to step it up a notch.

Surprisingly, the majority of the fighting isn’t done by the ladies themselves. It’s done by Lola. Oh…..Lola. I would love to be your friend, if I wasn’t entirely sure you’re snap my skull like a soft tomato if ever I made you angry. Lady has fighting skills, that’s for sure.

As always, Upchurch isn’t afraid to show the fight in great, messy, detail. Not that I like Lola being hit in the face, but there’s something refreshing about artists who aren’t afraid to show the female characters in trouble. It makes it more realistic, to have a character actually being knocked around a little bit. It makes it more realistic, than them managing to skip out of harm’s way every time. Aside from that, the movement is so fluid. For pictures that don’t move and (I assume) have no scratch and sniff component, it’s amazing that when Upchurch draws a scene, you can ‘see’ the face muscles rippling as someone is hit in the face. You can smell the rain as the armies of evil sweep over….Wait, spoilers.

This issue is heavy in the feels department as well. THANKS A LOT, WIEBE!

The Rat Queens has never been a sunny walk in the field of Happyland, however this issue takes it up….or down, as the case may be….a notch on the ladder of Sad and Creepy (the saddest and creepiest ladder that there is). The morbid scenery of slaughtered people and brooding skies, is matched by the story that Wiebe has his character’s telling. Don’t feel put off by it though. Wiebe has a way of just keeping the story and the characters from descending completely into the abyss. It might all be as complex as Dee’s eight tentacled God (who she does, or doesn’t believe in), but there are sparks of light in the form of humour. If you can keep yourself from rushing through this issue, which is hard to do because you want to know what happens next, then you’ll find the nuggets of funny.

Seven issue down and this team is still hitting it straight in the squishy bits. If you haven’t picked up The Rat Queens yet, then I suggest you get on the bandwagon now. They already have a huge following, the Cosplay for the characters is off the chain and it’s really something that you want to be part of.