Comic Review: Nailbiter #1- Do You Bite Your Nails? 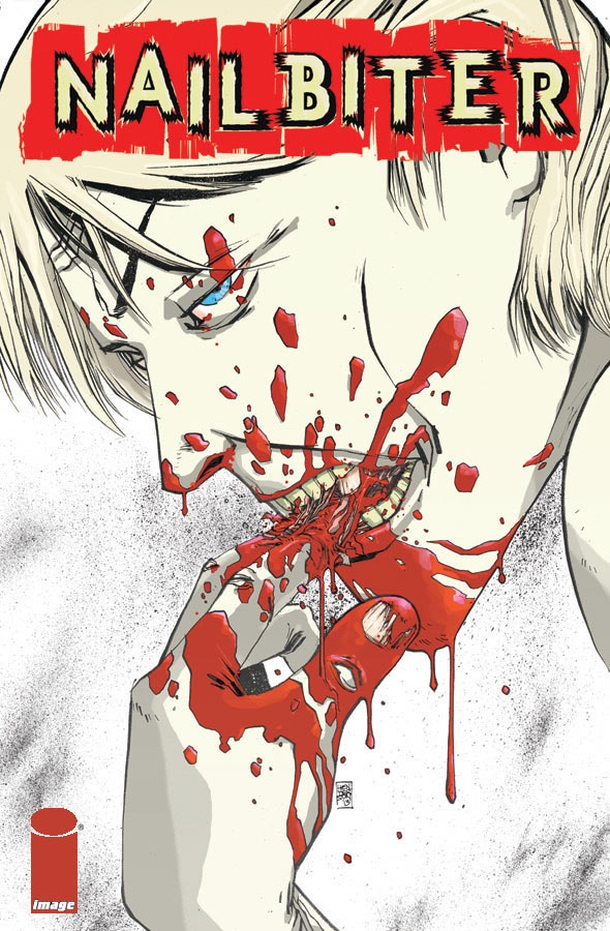 Do you want to hear a scary story? Yes you do, because Halloween should be every day and there’s only so many episodes of Dexter and Hannibal that you can watch, am I right? Nailbiter from Image is right up your alley and it’s about to crawl under your skin.

You know that phase you go through as a teenager, where you read up on serial killers? Just me? Oh well.

Even if you weren’t a creepy teenager with an unhealthy amount of books on serial killers, you have to admit that there’s something interesting about them. If there wasn’t something intriguing about the whole mess, then we wouldn’t have so many television series, movies and anime/manga based around the subject. But, in my opinion, the amount of comic series that do the horror genre justice, are few and far between. If you’re looking for horror genre in the specifics of serial killers? You would be fresh out of luck, looking amongst most of the new stuff.

Unless, you manage to get your hands on Nailbiter.

The storyline is pretty cool.

Serial killers can come from anywhere and be anyone, but in Nailbiter, Buckaroo is the place to go to increase your chances of meeting one. It’s kind of like the Adelaide of the world.

(I’m not sure if that’s a true fact, but it makes for good entertainment when talking with tourists here in Australia)

In Nailbiter,  Buckaroo surpasses everyone. It has had 16 serial killers (that they’ve found) from scurrying out of it’s woodwork since 1969. That sort of export will get you the attention of police, FBI and NSA. Which is exactly what happens.

The Writing Is By That Guy We Love!

And it’s written by…. ZOMG, you guys! JOSHUA WILLIAMSON! You might remember him from such comics as “Ghosted”. I didn’t know that when I started reading Nailbiter, but it’s pretty obvious now that I think about it. The writing is filled with dry, dark humour and twisted with class. Those are the hallmarks of a Joshua Williamson comic.

As is the main character, Nicholas Finch. Finch is a cop who’s on suspension (because Williamson does seem to love a main character who’s life is already dangling on a tightrope) by request of his friend who’s been trying to solve the mystery of Buckaroo’s main export- Serial killers.

If Edward Charles Warren’s M.O  is to go after people who bite their nails, then Williamson’s is to grab you by the eyes and force you to acknowledge what you’re getting yourself into. The first few pages aren’t an indication of the amount of gore in the first issue, but they’re a good indication of how much Williamson wants to haunt your nightmares after you’re done reading.

As will the cover art for this one.  It immediately caught my attention because I don’t bite my nails (so I’m safe!)  and I like the colour red.

The art inside is …gulp….confronting. Mike Henderson is the man behind it and I’m surprised by how much I really enjoy this. He’s a good artist, I think, but I’ve never been too excited about work he’s done with colours. It’s been good, but his real strength (I think) lies in the black and white work he’s done….With splashes of red.

Maybe that’s what makes this so good. The red is in all the right places, at just the right shade so it really pops. We have colourist Adam Guzowski to thank for that. His use of colours, though it’s a fairly restricted palette, helps to set a gruesome scene.

With these two working together, the whole issue is the perfect visual pitch for a horror. Yes, it’s gruesome but not overdone. Blood splatter, if you’re doing it right, is as much about where it isn’t as where it is. They do the writing justice.

All of it sets the stage for what will be coming, and what will be coming is dark and full of horrors. Another solid, engaging first issue from Josh Williamson who is once more working with an amazing team that put together great art.

Cartoon Network: Shows to Watch from the Short Development Initiative