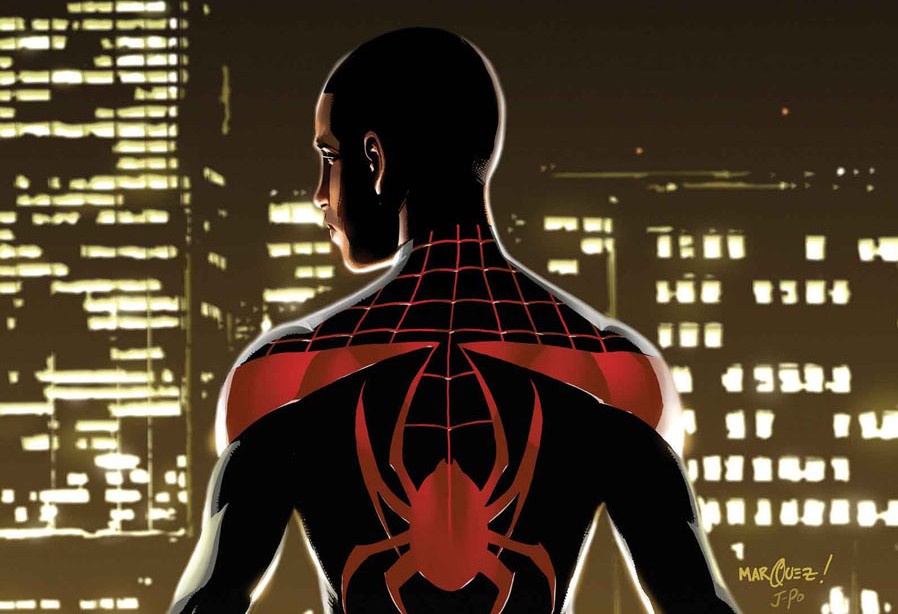 Calamity can not keep Miles Morales down as adversity, both new and old, comes his way.  After the death of Ultimate Peter Parker, Miles took over his book, Ultimate Comics Spider-Man.  Now following a world changing event, he’s got his own book bearing his own namesake, how does the first issue fare for the current Ultimate Spider-Man?

Starting Where They Left Off…

When Marvel launched their campaign for the Ultimate Universe mini-series, Cataclysm, many decried the move to be the final death knell of the much bemoaned universe.  With the planet-eating Galactus bearing down on this version of planet Earth and its heroes, further speculation also hinted at the idea of Miles Morales, the Ultimate Universe’s Spider-Man, to also be moved over to the Marvel continuity.  By the end of the series, however, Morales’ Earth was saved and his time on it seems to be a much more permanent stay than what was initially thought with the release of Miles Morales: Ultimate Spider-Man #1.

Though this issue begins a brand new series for the character, Brian Michael Bendis revisits to several plot threads he seeded before and during Cataclysm.  Miles’ father has gone missing for some time after he revealed his super identity to him.  Always at his side, his best friend Ganke Lee continues to be the keystone in Morales’ support system, talking through his situation and the complications of his secret life.  Best friend and tech support wrapped all-in-one, Ganke is at one moment loyal lieutenant and fanboy the next, sternly reminding Miles just who makes his web fluid just before fawning over the female half of street level team Cloak and Dagger.

Also helping him through his troubles is this universe’s version of Kate Bishop, his classmate and apparent girlfriend.  Having only let her in on the broad strokes to this point, Miles questions whether or not he should tell her the whole truth.  Should she be let in on the big secret?  Would previous experience say otherwise?  Does it hurt more to lie or to share the burden with the other party?  It’s an evolution away from common tropes of a beginning hero that may have some interesting consequences moving forward.

Early solicitations have already spoiled the revealed the return of Norman Osborn, the thought dead Green Goblin.  He does appear here, albeit briefly, however he was not the biggest reveal left for this issue.  Though fans who bought the recently released Ultimate Spider-Man #200 probably saw it coming, the last page reveal in this issue may actually come as a surprise.

The Not So Good

That being said, it is a bit disappointing that so much of this book is about looking backward at Peter Parker’s experiences and less work on building up Morales’ future.  Granted a theme moving forward with this character seems to be the Spider legacy, especially from the impression left by issue 200, where there seems to be a greater push to bring back more connections to Parker.  That being said, Miles has got to come out from Peter’s shadow at some point.

But Does it Look Good?

Thematically, much of this issue is about learning from the past to improve your present and it plays out fairly well, using assets Ultimate Spider-Man’s history to make something actually interesting here.  Indeed, David Marquez’s art here keeps up the fidelity and distinct identity the series has attained from the start.  The art here remains within the realm of realism, resisting the stylish re-imagining occurring in the other Earth-1610 books.  This maintains his individuality, not only within the Ultimate line, but within all of Marvel’s books.  What’s more, Marquez adapts key characters from the Mark Bagley era of USM and makes them his own.

Should You Pick it Up?

Miles Morales: Ultimate Spider-Man #1 is a beautiful read that sets up a variety of implications to delve into in the coming future.  It is satisfying both for loyal fans and new readers.  Though some of the surprises may have been telegraphed for the discerning public, there’s enough potential he that will keep readers coming back for a second helping.