Comic Review: Ghosted #9- Lions and Tigers And Bears, OH MY! 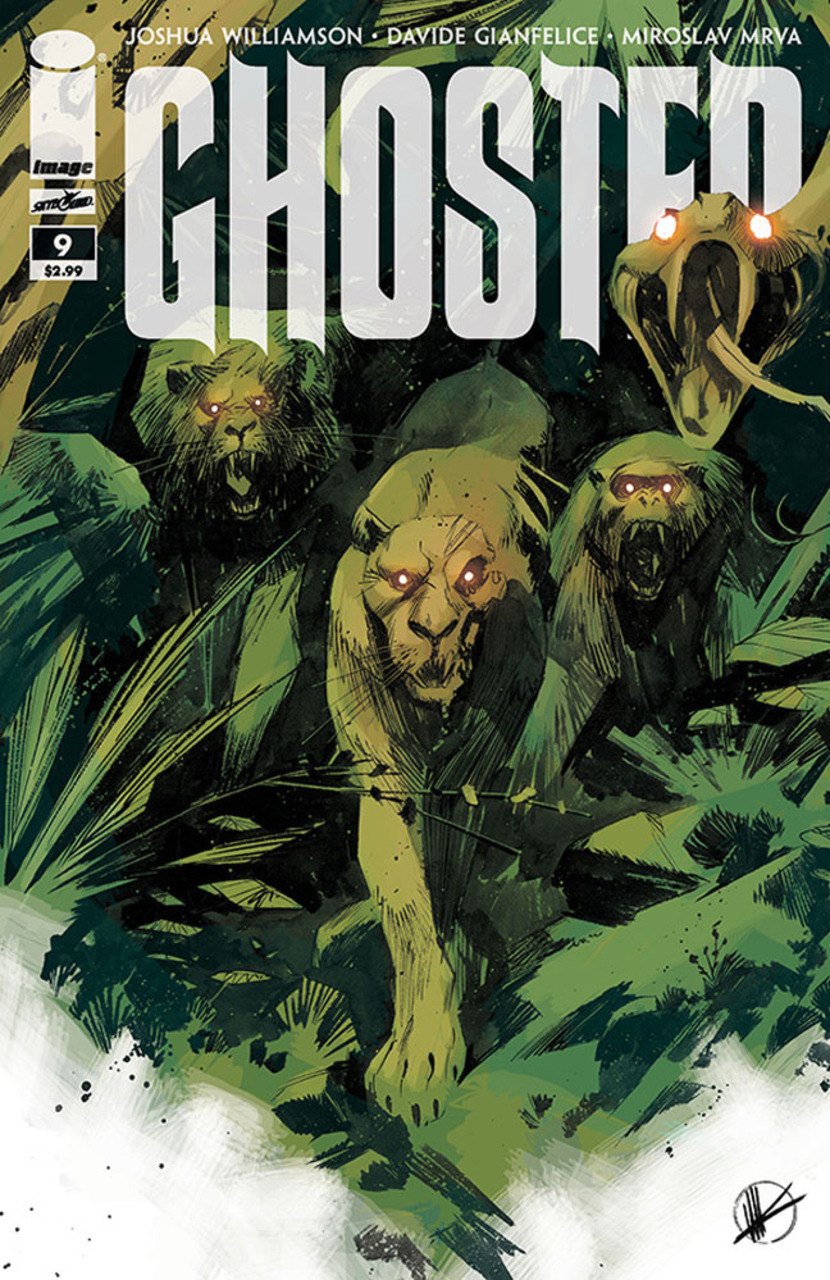 There are no bears in Issue 9 of Ghosted. But plenty of other angry beasts ready to tear Winters apart and that’s my kind of forest!

We delve into the memory that made Winters such a cold customer, see a comic book artist really shine and some people get possessed. This is Ghosted, not a bed time story for kids. Unless you don’t like your kids, then you should definitely read this to them and show them the pictures.

Issue 9: Taking A Walk In The Forest

Davide Gianfelice is the new guy on this project and I have to say, in Issue 8, he wasn’t really thrilling me as an artist. He’s good, I enjoy his work, but it all felt a little normal. I mean, as normal as it can be when it involves possessed ladies and creepy cult dudes. It didn’t have the same detail that was present and important when Sudzuka was the artist. Those small details were a real thrill and made the Ghosted issues re-readable, if only to try and find more hidden clues and movement in the background.

There are still panels that feel deconstructed or rushed. These are usually the panels that show characters moving from one area to another, there’s not a lot of action going on, so it’s understandable that detail isn’t vital. It would be nice, however, if there was more detail. Especially given that in Issue 9 of Ghosted, we see how much detail Gianfelice can do!

With the awesome colouring, as always from Miroslav Mrva, the visual aspect of Ghosted is stepping it up a notch!

Things get graphic. The details are really in the devils (get it? Because it’s all about posessions?!). In fact, there’s one particular splash page where Gianfelice truly shines. His detail, the character’s design, the use of space speaks volumes to what he is capable of. I just wish I wasn’t as surprised by his talent. I wish I’d already known he was able to create something like this. While he’s certainly someone with talent and there have been hints at how good and detailed his work could be, I wish I’d been enjoying it sooner.

Again, Miroslav Mrva shows how important a good colourist is for setting the scene. There’s a lot of jumping between different scenes and Mrva’s colouring makes the jumps noticeable without being jarring.  And Williamson, what more can be said about him, that hasn’t already been said? He continues to amaze and is going to have to work double time to keep us on our toes. Though, Issue 9 did have some pretty huge reveals.  He had all of this up his sleeve THE WHOLE TIME! Dude must have pretty big sleeves. I’d like to say he’s developing the characters well, but his writing is so good that I’m skeptical that Winters is capable of any kind of development or growth. As long as people keep hitting him in the face, I’m happy.

Another solid issue from a team that is bringing out the best in one another.

How to Acheive Internet Success