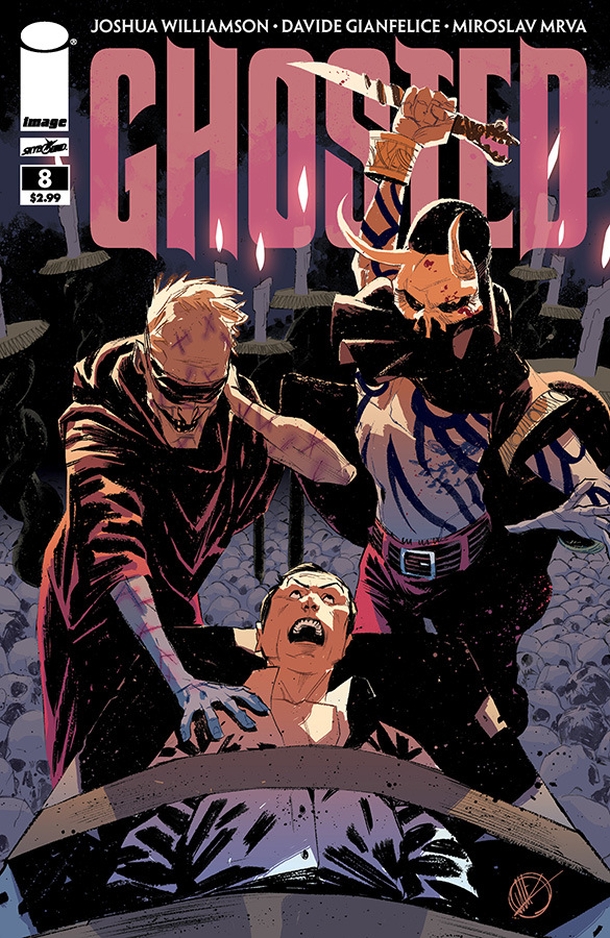 In the words of Ron Burgundy “That escalated quickly.”

If there’s one thing I love to see more than Jackson Winters being punched in the face, it’s seeing him say something witty to someone who will punch him in the face. Issue 8 has enough of both. (Okay, technically no ‘punching’, but he gets hurt and that makes me happy).

There’s a lot of violence in Ghosted and some fairly unsavoury themes that could get too heavy to bother reading about, if it wasn’t for the comedy aspect. It doesn’t have to be a laugh a minute, but a character who says something entertaining (even if it is pretty low-brow) can help to relieve tensions just enough, for it not to become overbearing. In Issue 8 of Ghosted, we see Winters’ trademark ability to not to care about who he’s being a smartarse too. I like that about Winters.

It’s hard to know where the story line is going to end up, at the end of this Issue. Remember in Issue 7’s review where I was all “Jackson Winters is kind of a huge self-centered jerk”? Well, he’s taken a sudden departure from that role and is almost acting like a half-decent guy, while also being cocky to the guys hitting him with stuff. Which makes me think that he’s up to something. Because he’s usually up to something. All of that aside, it’s nice to see a type of honour amongst thieves, a code of conduct if you will, that even someone as morally deficient as Jackson Winters can live by.

The words ‘Bang, Bang’ should just be in more comics. I know it’s hokey, but it just makes me want to head down to a milk bar, say “Gee Willikers!” a lot and play songs on the Jukebox! Despite only being two words, the ‘Bang Bang’ really stood out in Issue 8. It was a cool touch.

But there was something else that stood out, while still seeming familiar. If you’ve been reading along, you might have noticed a few familiar faces from Winters’ past popping up from time to time.  Me? I saw what looked like a familiar vest, worn by a certain someone who had loads of money and wanted a ghost or two stolen for him. It might just be a coincidence. Maybe all evil dudes shop at the same stores and hang out in the same clubs.

Maybe I’m just paranoid because Williamson has hinted in the past that what happened at the Trask mansion is not exactly dead and buried (what is in this series? Nothing, I tell you). Maybe I just miss those little hints and movements in the background that Sudzuka did so well, so I’m looking for them anywhere I can find them. It’s actually sad that Gianfelice hasn’t done the same thing. I know they’re different artists and that it’s a different setting than before, but…. I miss Sudzuka’s little background movements.

Got to love the Letterer, Rus Wooton. Apart from having one hell of an awesome name, Wooton has done well in this issue of Ghosted.

Williamson (the writer, haven’t you been paying attention?!) is wonderful at building characters, so it’s easy to hear the ‘voice’ of one of the long standing characters. (I think Winters voice sounds like Don Draper. Also Jon Hamm would play him in the movie that they must obviously release one day or I’ll cry).

But to instantly convey the voice of a character that’s only just arrived in the story, you need the help of a good Letterer. Wooton does a good job of conveying the inflection and tone of the new characters suddenly thrown into the mix. By removing the task of trying to work too hard on imaging what they sound like, it keeps the reader in the flow of the story. I also admire the skill of neat handwriting in a person.

Despite all the good stuff, this issue hasn’t thrilled me like all of the others. The story arc is still interesting and the overall story line will still have me coming back for more. Maybe I’m just getting acclimatised to Williamson’s magic, but when I finished Ghosted, it just didn’t….wow me, when I know it should have.

It does however, involve Winters being shot at and being hit in the face…..

Deadpool Vs X-Force: Not Days Of Future Past