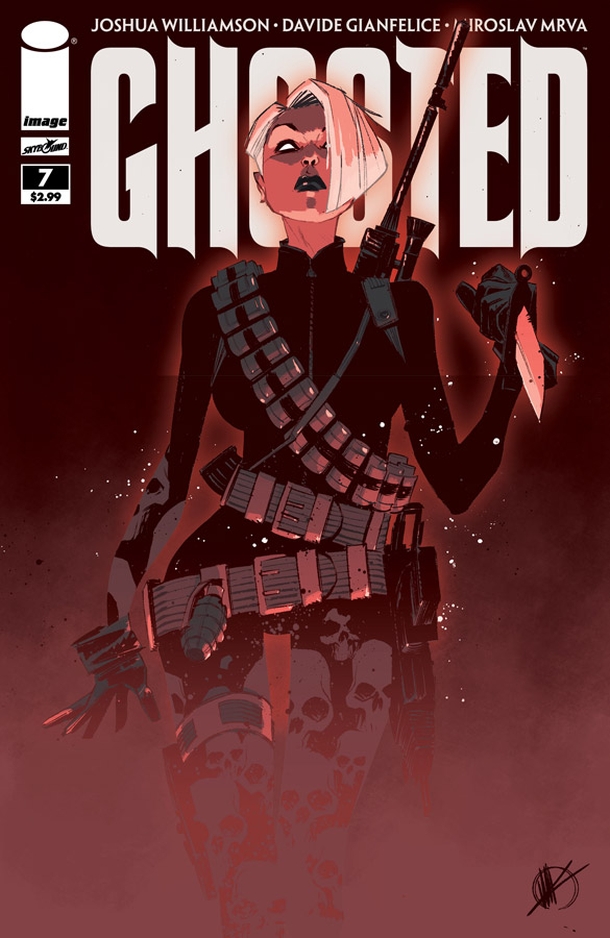 Ahahahahaaaaa….This issue of Ghosted is by far the most hilarious. I mean, not in the funny ha-ha way of Louis CK. But at the same time, I chuckled a few times because Jackson Winters is a jerk and I like that the debt he owes the Universe is being paid back in installments.

Ghosted #7: Where Winters Gets A Well Deserved Slap In The Face.

Issue 7 is packed. There are points where you’ll be sure ‘this is where they’ll leave it on a cliffhanger’, but no, Joshua Williamson doesn’t play hard to get. When you finish this issue, you’re going to realise that you are indeed hanging off a cliff, but that you didn’t see you were going over the edge until it was too late.

Apart from a ripping story line progression, this issue has a few more tidbits of information about that ‘casino job’, but more than that, it shows what a jerk Winters is. It’s easy to feel sorry for the guy, he just wants his own island where he can laze around on the beach all day. Don’t we all just want something like that? But no, people can’t leave him alone, just because he may or may not have stolen large sums of their money. Or had them torn apart by ghosts. Or he killed someone they liked.

On the other hand, it seems like every time he’s presented with the chance to do the right thing, he’d rather just do the thing that gets him out of doing the right thing. It’s a constant struggle for the people around him, to convince him to go with the plan they had of saving the girl/not shooting someone/being a decent guy. I can understand why some people would just rather see him dead, he’s a lot of hard work.

Getting Used To The New Guy

Davide Gianfelice is seriously growing on me, but I wouldn’t blame anyone for wanting Goran Sudzuka back (word on the ‘net is that he will be returning). Both have done a great service to the story with their talent and ability. I feel like I’m sort of cheating on Sudzuka for singing the praises of Gianfelice….

‘The New Guy’ as I’ve decided to call him, is doing a great job of it though. There’s a fantastic little chase scene in Issue 7 that takes on a quite a rushed feel, the scene is just blocks of shapes rather than a lot of detail. It’s not something that usually appeal to me, but Gianfelice has managed to pull it off. Sudzuka excelled at fast action scenes, so Gianfelice has some big boots to fill and personally, I still prefer Sudzuka’s fast paced scenes.  However, Gianfelice’s work is good, so no complaints here.

All The Pretty Colours

If you’ve read any review I’ve done, you know I have a thing for the colour red. Any colourist that can do red properly gets my instant approval (and very few people do red the way I like it).

Miroslav Mrva is one of those colourists who does colours the right way. Not only because the red in Ghosted is well done, but because all the other colours are as well. Usually, the work of a colourist does go unnoticed. Even in great works like Ghosted, where the story line is moving so quickly and the drawings are filled with details, it’s easy to forget about the colour. Which is sort of the colourists job, they have to match the shades and tones to the scene that’s happening without anyone taking much note of it.

A perfect example of this matching, is in Ghosted Issue 7.

We’re treated to a brief flashback of a time before Jackson Winters knew some ghost stories were real. The majority of Ghosted’s colours come from a restricted palette. It’s great, it keeps everything feeling dark and a little dangerous. It provides a shadowy backdrop for any glowing ethereal types that might be floating about. But in this week’s episode, it also shows you exactly how bright and relatively carefree Winters’ life was before his past started haunting him. Mrva completely changes the tone of a scene, just by making the colours vibrant.
Great progression of story line (which comes standard now from Williamson), a good settling in of the new artist and colouring that totally hit my eyes in their happy points.

May Movie Preview: The Most Wonderful Time of the Year