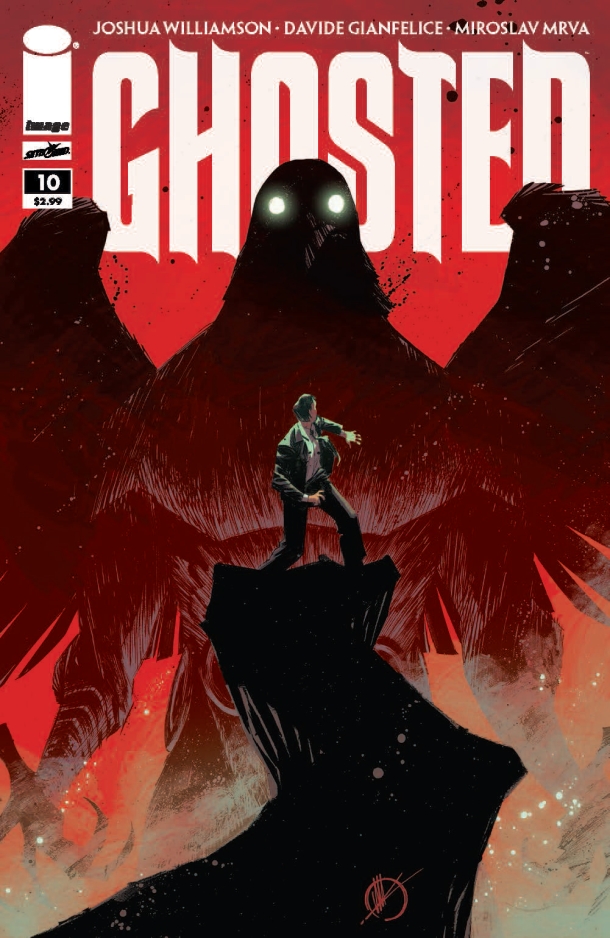 Women vomiting crows, bullets that ruin everything and a tender moment between Jackson Winters and a blood-thirsty demon. Issue 10 of Ghosted is exactly the way you thought it would be, if you were Joshua Williamson, if you aren’t him you probably didn’t see that coming.

Ten issues in and if you’ve still not started reading Ghosted, this isn’t the issue to start with. Mainly because it looks like the end of the Blood Crow arc and (hopefully) on with the main storyline once more.

For those who haven’t read up at least part way into this particular arc- SPOILER ALERT. The Blood Crow arc has been full of terrors, but also some pretty nice references to the Trask mansion that you are going to want to discover for yourself. So anything beyond this point, may ruin that discovery. Only jerks spoil things for people and I’m trying to cut down on being a jerk to 50 times each week.

So seriously, no reading past this point!

With that out of the way, how COOL is Anderson?!

Sure, as far as imagery goes, she’s ‘standard’ when it comes to the comic book female body type. She looks like the cousin of Doctor Blight (from Captain Planet, seriously what were you DOING in the 90’s?), which is awesome because Doctor Blight was awesome. She could have stolen that outfit from any number of female super villians. But that works for her! And Gianfelice (the artist) and Mrva (the colourist) did such a great job!

Yes, yes, I know it’s been done before. It doesn’t make it not good, it makes it good use of an accepted artistic approach.

While it’s good to see it come to an end, the Blood Crow arc has been engaging. It’s given some insight into Winters and a look into the freaky world he’s been dragged into since ‘that job’. For an arc that spent most of it’s time in the one place, it’s certainly been able to give an expanded view of the Ghosted universe.

There just is never enough time to explain all the ways Williamson writes this story so well. His timing in this series has been quite impressive. Issue 10 is a good micro example of how Williamson has paced the Ghosted series in general. Every event, expected or not, hits at the right time and doesn’t stick around long enough to become sour.

As always, there were twists because it’s written by Williamson and that’s what he does! While some of the twists were a bit more expected than others (seriously there’s this one bit where I couldn’t even!) it’s setting up Ghosted‘s next offering in all the right ways.

8 of 10 pictures where they colour outside the lines.