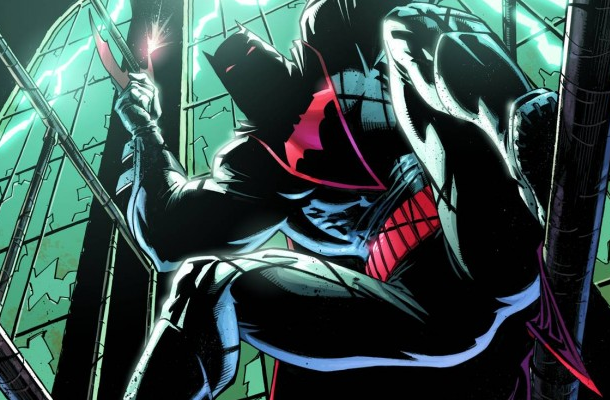 Earth 2 Annual #1 is one of four jumbo sized, $4.99 comic books released by DC this month. Unlike the other three DC annuals, however, Earth 2 Annual #1 takes place in its own separate world.

No super hero comic book continuity would be complete without confusing alternate realities. Despite DC’s drastic attempt to consolidate and simplify the “DC Universe” with their “New 52” reboot, the comic industry giant simply couldn’t resist creating Earth 2. But what’s so good about this Earth 2, and more importantly, should you spend your time and money reading about it? We’ll tell you everything you need to know in Geek Insider’s review of Earth 2 Annual #1! 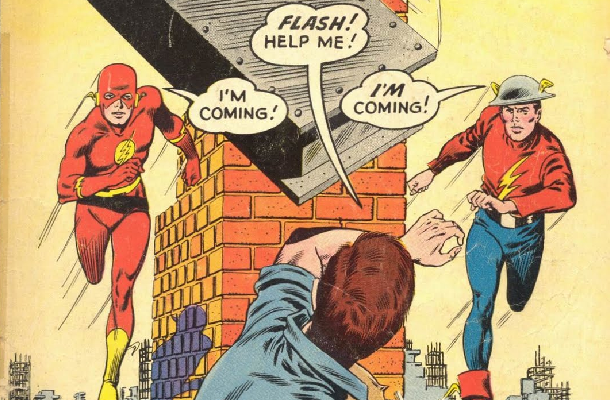 What on Earth is Earth 2?

Simply put, Earth 2 is an alternate version of DC’s “standard” Earth 1 universe. The concept was originally introduced in the famous “Flash of Two Worlds” story arc in 1961’s Flash #123. The landmark issue attempted to explain the discrepancies between the story lines of golden age comic book heroes in the 30’s and 40’s and the same comic books heroes in the 60’s by placing them in alternate realities. The concept of alternate comic book continuities has grown and expanded ever since, with Geek Insider articles on the many versions of Spider-Man and The Incredible Hulk showcasing a few examples.

DC wiped the slate clean in 2011 with its aforementioned “New 52” reboot which limited the DC Universe to one main reality, Earth 1, and a one alternate reality, Earth 2.

While Earth 1 is essentially our own world inhabited by super-heroes, Earth 2 is radically different. Most of the planet is policed and controlled by the combined military efforts of the world’s nations, known as The World Army. The need for such a unified force resulted from Earth’s invasion of by parademon aliens from the planet Apokolips. The long Apokolips War was eventually won by humanity after Earth 2’s Superman, Batman and Wonder Woman sacrificed their lives to defeat the entirety of Apokolips forces.

The three heroes were thought to have been the last of their kind, but a few gifted individuals have appeared following the Apokolips War, with many more being reported to The World Army at an exponential rate. This takes us to the events of Earth 2 Annual #1, set five years after the end of the war and sits between Earth 2 #12 and the upcoming Earth 2 #13.

For the many comic fans who have not been regularly reading DC’s Earth 2 series, their purchase of Earth 2 Annual #1 was likely based on one thing and one thing alone: the striking image of a new Earth 2 Batman on the issue’s front cover and its eye-catching “The Darkest Night!” subtitle.

We don’t know who he is, where he’s from or why he’s decided to continue the work of Earth 2’s original Batman, but DC’s marketing for Earth 2 Annual #1 strongly suggests that the answer to these questions lies within its pages.

It’s certainly the most intriguing of the four annuals DC has released this month and it’s quite understandable that newcomers to the Earth 2 series would use this as an entry point into the weird and wonderful alternate reality. But unfortunately, DC’s hinting of a mysterious Earth 2 Batman adventure is the reason behind Earth 2 Annual #1‘s greatest failing.

Earth 2 Annual #1 Suffers From a Lack of Batman

Despite adorning Earth 2 Annual #1‘s front cover, Earth 2 Batman’s appearance in the comic book is limited to a mere seven pages: a double page panel just over half way into the book and a five page sub-plot at its end. This Batman is a battle hardened detective equipped with lethal weaponry and a deep set anger. His thought processes are less refined than that of Bruce Wayne’s and he has no aversion to ending the lives of criminals. But otherwise, we’re left in the dark. We’re not told who this Batman is, what his motivation is or even what he’s trying to achieve.

As with many things in life, it’s foolish to judge a book by its cover. But those in the comic book industry are fully aware of the importance of a first impression and use comic covers to their full advantage. Many big comic book publishers hire “cover artists” that exclusively work on a comic cover. These same publishers ensure that their covers have eye-catching imagery, logos and tag lines in order to reel in customers. With this in mind, DC’s misleading Earth 2 Annual #1 cover and the lack of Earth 2 related content in in the book was extremely disappointing. 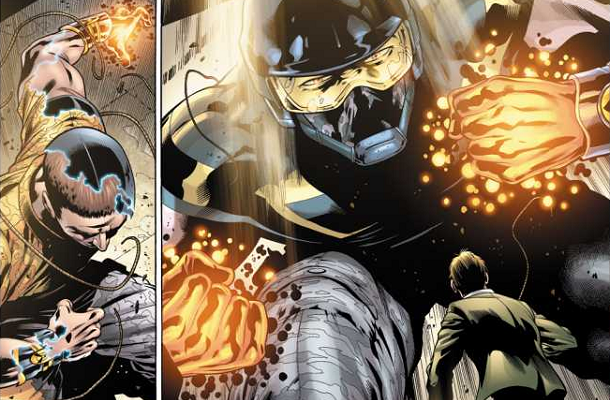 Earth 2 Annual #1 opens with Al Pratt of the World Army being transported to Phnom Penh, Cambodia in order to apprehend war criminal Henri Roy. With some time before his arrival, Pratt recounts his memories of the previous five years and the origins of his nuclear fuelled super powers.

While attempting to deploy an atomic bomb at a parademon base during the latter years of the Apokolips War, Pratt and his team are overwhelmed by Apokolips forces, resulting in the bomb’s premature detonation. Instead of perishing along with his team, Pratt survives and is inextricably imbued with the ability to grow into a giant at will and pull nuclear powered punches. Pratt then spends the next five years grieving over the loss of his team, fighting alongside fellow super hero Captain Steel, and attending regular psychiatric sessions.

As with a lot of poorly implemented comic book stories, Earth 2 Annual #1 contains some interesting ideas but is let down by sloppy writing. In this case the blame falls onto writer James Robinson, who’s script is littered with poorly worded sentences, redundant dialogue and idiosyncratic characterisations.

Pratt’s military psychiatrist, for example, is more interested in Pratt’s new physical abilities than his mental well being. She pushes Pratt into recollecting his harrowing memories of the nuclear blast, causing great mental distress to Pratt and resulting in him accidentally destroying part of the World Army headquarters. Instead of apologising in their next meeting, she instead asks Pratt how his clothes are able to grow as he does. Everything this character says conflicts with her role as a psychiatrist and is irrelevant to the book’s narrative.

The comic’s villain, Henri Roy, is French. This is established in his first appearance in Earth 2 Annual #1 where he finishes his sentence with the overused phrase “mon ami”. On the very next page Pratt calls his adversary “Monsieur Roy”. This inelegant referral to Roy’s nationality continues until his eventual capture, but are his French origins important to the book’s narrative? No, not even in the slightest.

It seems that writer James Robinson is so afraid that the artists are unable to convey what is a relatively simple story that he is willing to cripple Earth 2 Annual #1‘s script with pointless, explanatory dialogue. It’s completely unnecessary as Julius Gopez and Cafus’ artwork more than adequately shows what’s going on. 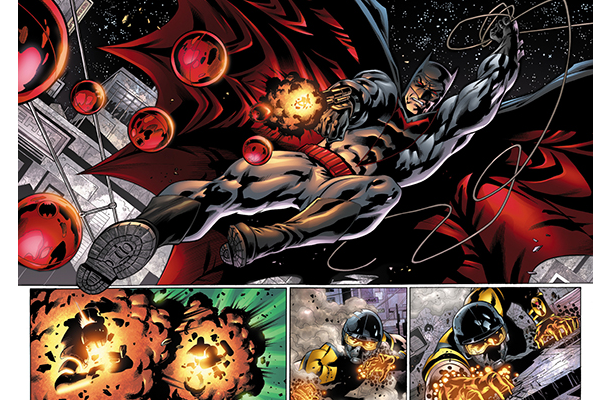 Robinson’s Use of the English Language is Questionable

As mentioned earlier, James Robinson’s command of the English language is just as questionable as his trust of his artistic counterparts. Here’s some of his greatest offences,

Psychiatrist: And they can find no explanation how that is possible.

Commander Khan: What’s interesting is how greater and lesser degrees vary from one for pit to another.

Pratt: Better than last time, you and me. The Flash made me look like an idiot.

It’s almost ironic that Robinson would go to such unnecessary lengths to explicitly explain the actions of each character, only to reduce the clarity of said characters’ dialogue through his sloppy use of the English language.

Earth 2 Annual #1: A Problematic Disappointment From Start to Finish

Earth 2 Annual #1 is a comic book with problems. Within its pages are some genuinely promising ideas that may flourish in future issues, but are unlikely to if left under the direction of James Robinson.

Ultimately, those thinking of picking up this comic book because of the Earth 2 Batman on the front cover will be disappointed. Additionally, those hoping for a interesting take on the conventional DC universe will be disappointed. Earth 2 Annual #1 is simply not worth your time or money and can be safely avoided.

But perhaps you’ve already bought Earth 2 Annual #1. Do you agree with this review? Do you think James Robinson has seen better days? Let us know what you think by leaving a comment below!