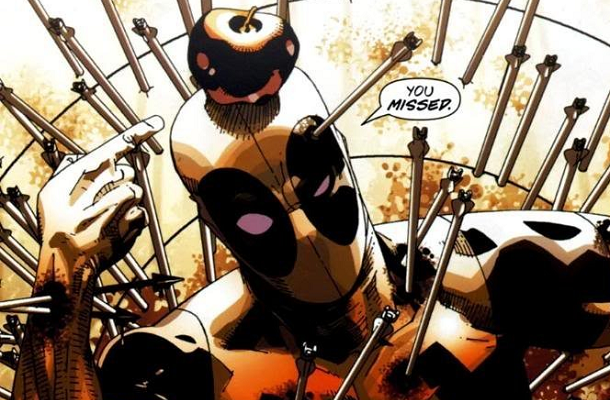 Deadpool Killustrated poses some interesting questions. How do you defeat the un-defeatble? How do you beat super hero comic book characters that always win? And how can an indestructible villain die? The merc with a mouth Deadpool has got a pretty nifty idea of how to answer all three. Find out how in Geek Insider’s review of Marvel’s Deadpool Killustrated #4!

Deadpool Killustrated: The Story So Far

For those who aren’t familiar with the character, Marvel‘s Deadpool is a mentally unstable, wise-cracking mercenary who is fully aware of being in a comic book. After discovering he had cancer, Deadpool joined the Weapon X Program and was granted a healing factor that held back his condition. Unfortunately, Deadpool’s cancer took over his body, leaving him alive but severely disfigured.

Unlike Wolverine’s healing factor, Deadpool is completely incapable of dying and can even stick his own head back on in the event of decapitation. Armed with his trusty katana and whatever else happens to be lying around, Deadpool and the several other voices that inhabit his mind roam the Marvel Universe in search of adventure, destruction and death.

However, after the “other” voices turn silent, Deadpool decides that it’s time to die and attempts to do so by battling and slaying every single Marvel super hero he can find. After killing every single hero and villain in the universe, Deadpool realizes that an infinite amount of super heroes exist in infinite alternate realities. He concludes that the only way to ever kill them all is to destroy the very idea of heroes in the first place. Four issues later and Deadpool’s jumped out of the Marvel Universe, leapt into the “Ideaverse” and killed off the heroes of numerous literary classics, which brings us to the events of  Deadpool Killustrated #4. 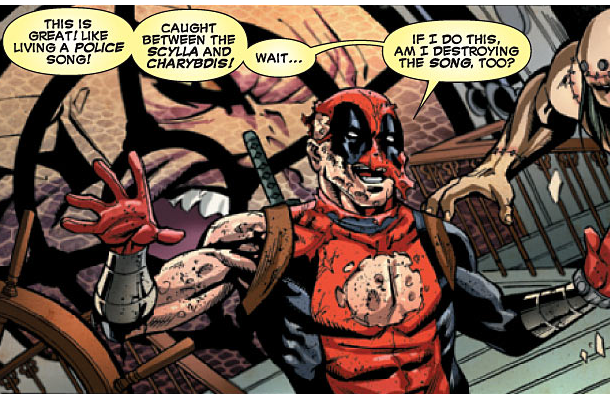 In the meantime Deadpool takes down both the Scylla and the Charybdis of Greek mythology in order to destroy the idea of indestructible titans such as Marvel villain Galactus. He then quickly hops to medieval Paris to murder The Three Musketeers, erasing the concept of “team work” and destroying the Avengers, the X-Men and other super hero teams in the process. It’s at this point that Deadpool is attacked by Holmes, Watson, Beowolf, Natty Bumppo and Hua Mulan.

As you can probably gather,  Deadpool Killustrated #4 is a wild, wacky and ridiculously silly adventure that you could only find in a Deadpool comic book. The loud-mouthed mercenary continuously cracks silly jokes as he casually does away with the history’s greatest fictional heroes in the pursuit of his own nonsensical goals. It’s complete madness but it’s incredibly funny; and clever madness at that!

In the comic’s final act, Deadpool, after being reacquainted with one of his more intelligent split personalities, jumps into the void between fictional stories bringing Sherlock Holmes along with him. It’s at this point that Deadpool reveals that he doesn’t need to kill all the heroes in the Ideaverse, he simply needs to overwrite the idea of invincible heroes with the idea that heroes can be killed. In an unexpected twist, Deadpool highlights the effectiveness of his plan by pointing out that us, the reader, willingly bought Deadpool Killustrated #4 knowing that he’d be murdering our civilizations’ most beloved heroes. It’s deep stuff, but it doesn’t stop there. 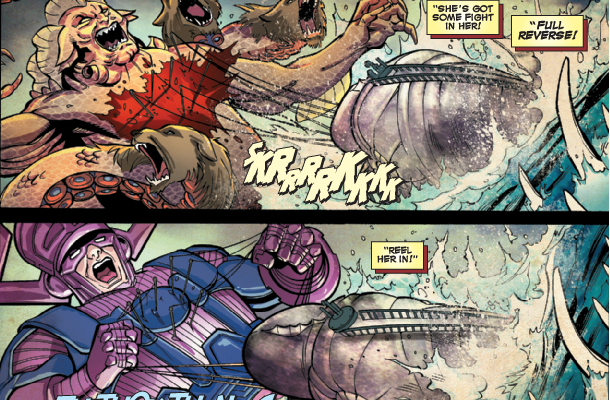 Deadpool adds further evidence to his claims as he highlights the many classic pieces of fiction that are already becoming forgotten by younger generations. He even goes as far as to state that Marvel characters such as Captain America, Wolverine and Ms. Marvel will also become irrelevant in time. As the comic reaches its final few pages, Deadpool concludes that the disappearance of the world’s heroes will result in him also fading away, freeing him from his immortality.

Deadpool comics have always been known for their non-linearity, erratic pacing and bizarre narrative, but Deadpool Killustrated #4’s huge shift from comedic hero murdering to fourth wall-breaking, comic book metaphysics left my head spinning. This is by no means a bad thing, as many of the best comics I’ve read are the ones that actively question the nature of the medium and the self imposed constraints the comic book industry refuses to push against. I like comic books where anything can happen, and that’s exactly what Deadpool Killustrated #4 has given me.

Writer Cullen Bunn should be commended for his imaginative work on Deadpool, but credit should also be given to penciler Matteo Lolli, inker Sean Parsons and colourist Veronica Gandini. This team of artists have effortlessly melded the gritty, old-timey worlds of classic fiction with Deadpool’s silly antics. At the same time Deadpool’s tattered outfit and tired appearance in Deadpool Killustrated #4 fittingly shows the desperation behind his jokes.

Something must also be said of the excellent cover art provided by Mike Del Mundo in which Deadpool attempts to set Sherlock Homes on fire with a  giant magnifying glass as Holmes uses his own investigative tool to examine Deadpool comic books. Del Mundo creates this scene in the style of an old Sherlock Holmes illustration, complete with the title “The Adventures of Sherlock Holmes”. It’s a funny cover, but also symbolises the whole team’s appreciation and respect of the source materials despite throwing Deadpool into the mix. 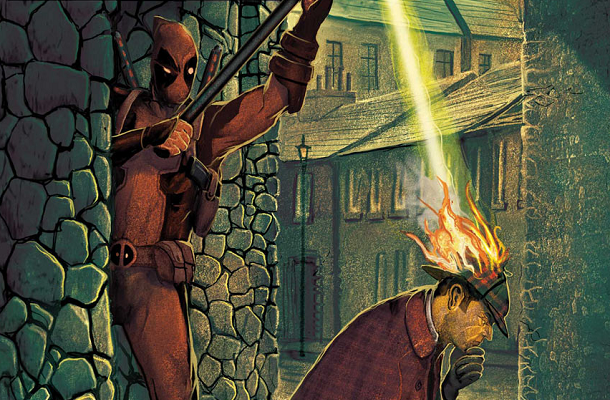 What Do You Think of Deadpool Killustrated #4?

Have you already read Deadpool Killustrated #4? If so, what did you think of the idea of the Ideaverse and the comic’s strangely introspective ending? Are you going to be picking up other Deadpool comics in the future? Let us know your thoughts by leaving a comment below!