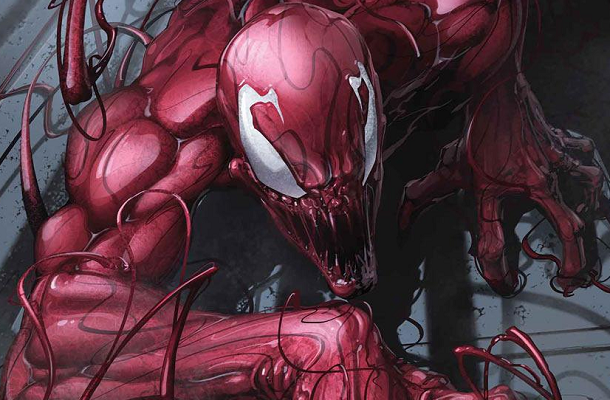 Superior Carnage #1 aims to bring the Marvel psychopath kicking and screaming back into the Marvel Universe as part of their Superior Spider-Month. But does the genocidal alien wrecking machine have what it takes to win over comic book readers? Is the book worthy of its bold title? And is it a comic book worth your time? These questions and more will be answered in Geek Insider’s review of Superior Carnage #1!

Superior Carnage #1: The Story So Far

Most super hero fans will be familiar with the iconic Spider-Man villain Venom, but not quite as many will be familiar with Venom’s offspring Carnage. Bonding with the deranged murderer Cletus Kasady, the Carnage symbiote killed, killed and killed some more. So dangerous was Carnage that Spider-Man had no choice but to team up with Venom to defeat him once and for all.

Of course, nothing lasts forever in the comic book world and Carnage and Kasady returned time after time. A recent team up between the Scarlet Spider and Agent Venom in Minimum Carnage: Omega resulted in the effective lobotomisation of Kasady and the end of Carnage’s murderous reign of terror. Or so everyone thought… 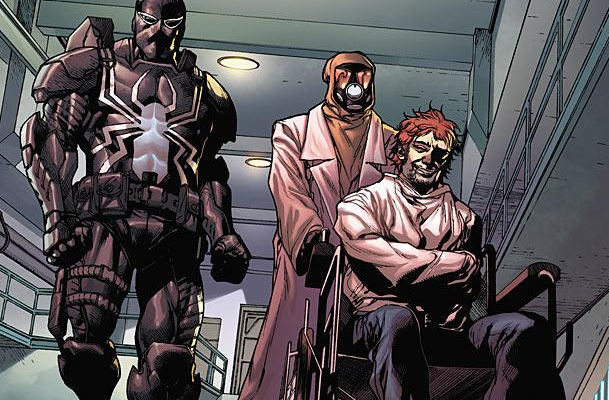 It’s just another, delightfully life threatening day in maximum security super-villain prison for fraudulent businessman Ted Conelly. Governmental budget cuts have seen “normal” convicts sharing cells with the world’s worst villains and what’s worse, especially for Conelly, is the arrival of the catatonic serial killer Cletus Kasady. Needless to say, a wholly predictable attack on the prison gives the Carnage symbiote the opportunity it needs to engulf Kasady and start doing what Carnage does best.

Superior Carnage #1 is one of those peculiar comic books that contains some good ideas, some good plot points and some good artwork, yet doesn’t gel these three factors together well enough to make it a truly great comic book.

Part of the issue stems from the fact that Carnage is a character without motives, morality or even a voice. Writer Kevin Shinick, of Robot Chicken fame, handles this dilemma in perhaps the only way possible – by relaying the events of Superior Carnage #1 through the eyes of the cowardly Ted Conelly. Shinick then hands narration over to Marvel C-list villain The Wizard who plans to tame Carnage in order to rebuild the ridiculously irrelevant Frightful Four.

The Return of The Wizard Fails To Impress

Despite once being a formidable foe to the Fantastic Four, this modern era of comics has seen The Wizard reduced to nothing more than a forgettable, comical character. The choice of villain may have been intentional considering Shinick’s background in comedy, but unfortunately The Wizard comes across as pathetic rather than funny. The only other potential sources of humour in Superior Carnage #1 comes in the form of two ineloquent and startlingly direct references to Game of Thrones and The Pussycat Dolls. 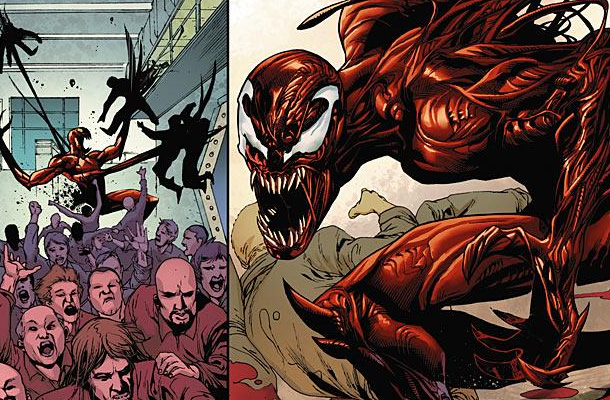 Weak spots in Superior Carnage #1’s script aren’t confined to its failed stabs at humour as particular plot choices and inconsistencies will undoubtedly leave some readers scratching their heads in confusion. Why is an inside trader shoved into a supermax prison instead of a murderer or rapist? What was the cause of the explosion at the start of Superior Carnage #1? Who would put a father and son team on prison watch? And why oh why did Venom deliver Carnage to prison considering the many, many times Carnage has escaped from prisons before?

Superior Carnage #1 may be lacking in narrative cohesion, but it sure contains a healthy does of graphic violence. After his release, Carnange wastes no time in killing as many inmates and guards as possible in a flurry of claws, teeth and blades. Blood showers down as Carnage impales his victims and smothers other with his manic tentacles – it’s all very entertaining. One criticism of these scenes however is their lack of atmosphere and horror in general.

Carnage is constantly shown unobstructed and fully lit, with absolutely nothing being left to the imagination. Having Carnage lurk around a poorly lit prison would have generated a great deal more tension and it wouldn’t have been all that difficult to pull off; a missed opportunity by artist Stephen Segovia.

On the whole Segovia’s has done a decent job of capturing Carnage’s unbridled blood lust as well as the fear of the many fleeing prisoners. He’s also provided some stunning full page and double page spreads featuring both Carnage and previous incarnations of Venom. However, in just as many places Segovia has stumbled on the recreation of anatomical proportions and basic human poses.

Jay David Romas’s colours are also quite fitting – with Carnage looking particularly intimidating – but also fails to add the aforementioned gloominess that would have made the comic book distinctly and enjoyably horrific. Ironically, the ideal tone for Superior Carnage #1 is displayed on the book’s front cover, courtesy of artist Clayton Crain. The cover shows a menacing looking carnage sulking down a dimly lit wall overcast with hard, straight shadows. It’s hardly a unique cover, but at least it has atmosphere. Here’s hoping we see more of Crain’s work on future Superior Carnage covers.

Superior Carnage #1: For Venom and Carnage Fans Only

Superior Carnage #1 is a mediocre comic book with a lot of promise but weak delivery. Numerous small issues with the book’s script and art direction belittle what could have been a strong horror entry in Marvel’s flamboyant catalogue. Fans of Venom and Carnage are likely to find something of interest within Superior Carnage #1, but other readers should approach this book with an ounce of caution.

This being said, we at Geek Insider value the opinion of each and every one of our readers. So if you’ve read Superior Carnage #1 and have something to add to our review or disagree with a point that’s been made, be sure to let us know by leaving a comment below!

The Guild: The Official Companion – Review