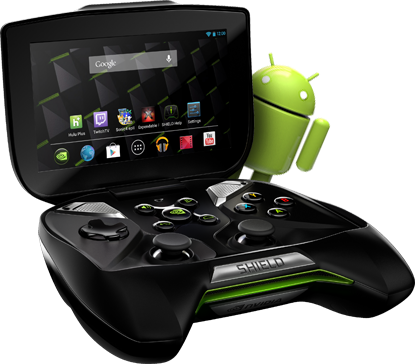 Scratch the original June 27th release date. The nVidia Shield is now scheduled to release July 31st, 2013… but happily nVidia has reconsider the MSRP on the nVidia Shield and the price has now dropped by $50.

Preorder of the nVidia Shield 16GB Portable Gaming device is $299.99 at NewEgg (was $350). Specs include a 5-inch 720p Retinal Display, Tegra 4 Mobile Processor, and runs on Android Jelly Bean. The price also dropped to $299.99 at GameStop, though it’s no longer available for preorder there (probably related to delay shipment on nVidia’s side of things).

As a brief recap: a day before its original June 27th launch nVidia pulled the plug on the nVidia Shield , citing an “issue relates to a third-party mechanical component” on their blog. Just days before that the price dropped to $299.99 at NewEgg and comes bundled with bundled with two Android games: Sonic 4 Episode II THD and Expendable: Rearmed.

The nVidia Shield promises to be a big innovation for both the hardcore Android gamer and the PC gamer who could use a little portability. The device runs Google Play and wirelessly streams to your smart HDTV. If you’re a PC gamer you’ll be able to stream compatible PC games from your desktop to the Shield and to an HDTV for a bigger picture. Though, bear in mind PC streaming will require a GeForce GTX 650 or higher end GeForce GTX graphics card and at least a 2nd gen Core i3 processor.

The following PC games will be compatible with the nVidia Shield: