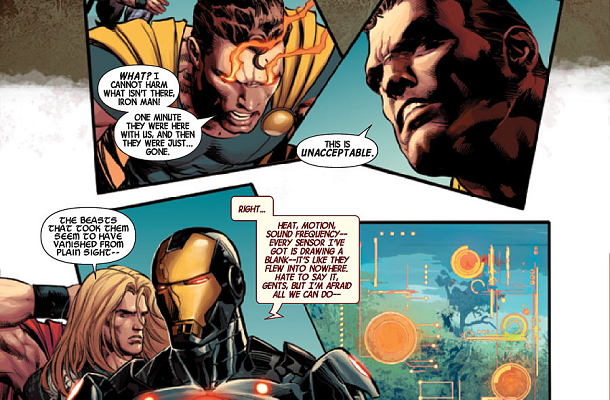 Avengers #13 is the most important comic book to come out of Marvel’s doors in recent weeks. Outer space is a large, scary place and the vast unknowns of space have never been as important as they are in the “Marvel NOW!” event. With the unexpected return of the High Evolutionary, what other surprises are in store for Marvel comic book readers? Everything you need to know is right here in Geek Insider’s review of Avengers #13! 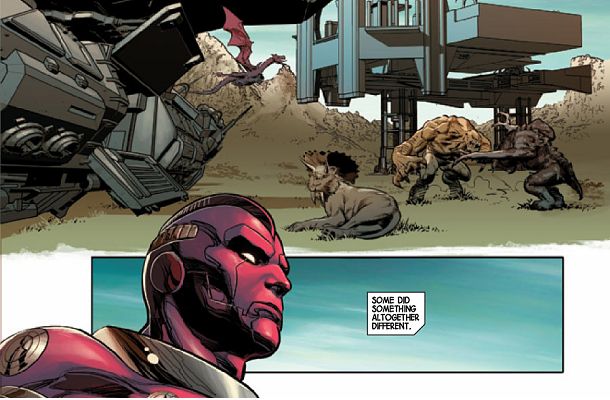 Jonathan Hickman breaks his usual trend of non-linear storytelling to allow co-writer Nick Spencer to conclude the events of Avengers #12 in which the neo-human children of the Savage Land are kidnapped by the High Evolutionary.

Naturally the Avengers are upset about the abduction of those whom they see as the next generation of Earth’s super heroes. However, none are more upset than Marvel Universe newcomer Hyperion, and it’s because of Hyperion that Avengers #13 really shines.

Feelings hinted at through Hyperion’s words in the previous issue are confirmed through his actions in this issue. Not only does he see the neo-humans as young children, he sees them as his children. 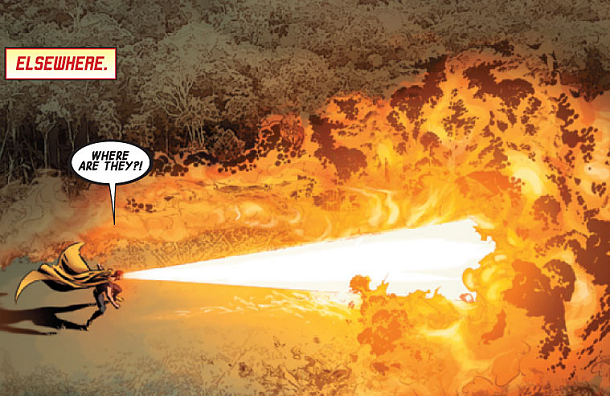 Hyperion’s urgency in finding his children results in an unbridled rage unseen in the hero within the pages of recent Avengers issues. The scenes in question are extremely potent and will undoubtedly resonate with any reader that has been charged with the care of a child.

Avengers #13 also delivers a strong dose of overdue action in the scenes that have the titular super-hero squad battle it out against the High Evolutionary’s anthropomorphic animal abominations and his newly resurrected Terminus. That’s right, not only does the High Evolutionary return as an Avengers villain, but so does the ancient, robotic, interstellar war machine Terminus. With powers overwhelming that of even Iron Man, it’s up to Thor, the God of Thunder, and Hyperion, Lord of the Sun, to eliminate the colossal threat Terminus poses to all life on Earth; a scene that ends with a genuinely exciting climax.

Mike Dedato’s art and Frank Martin’s colours once again meld together into some of the best creative super-hero artwork ever put to print. Unlike the bold and bright artwork that has become synonymous with the super-hero comic book genre, Avengers #13‘s art feels foreign and otherworldly. Its eerie sheen visually defines the Avengers’ unspoken struggle to find their place in a universe they no longer fully understand. That’s the premise of the “Marvel NOW!” event, and the super-human Avengers now seem ordinary in comparison to the events unfolding around them.

Avengers #13: It’s All About Hyperion

But ultimately it’s Hyperion that makes this comic book. He is Avengers #13‘s focal point and through him we’re introduced to several themes that will clearly carry through to future Avengers issues. Undefined strength, misdirected power, reliance on hope and a future unknown; these themes are what Hickman’s current run with Avengers will be known for and the fact that they begin here in Avengers #13 will make it a comic worth reading for most Marvel fans.

However, the question remains as to whether or not future issues, including Avengers #14, will follow on directly from the events of Avengers #13. I personally wasn’t expecting the current issue to conclude the drama generated in the the previous issue as, under Hickman’s direction, the Avengers series has become known for the dramatic shift in narrative between each fortnightly issue.

While the individual comics are fantastic, I have openly criticised the series’ non-linearity in my past reviews stating that asking comic readers to wait months for the conclusion to a previous issue while simultaneously asking them to invest in a new story arc simply isn’t working. Unfortunately, Avengers #13 quite abruptly ends with a conclusion to the heroes’ immediate conflict without giving the slightest hint as to what might happen next.

Hickman’s work with Marvel is clearly building up to something amazing. But only so much time can pass before readers lose interest in the series completely. Do you think Hickman and the Avengers series is walking on thin ice? Are you happy with the series’ current direction? We want to know what you think, so leave us a comment below!