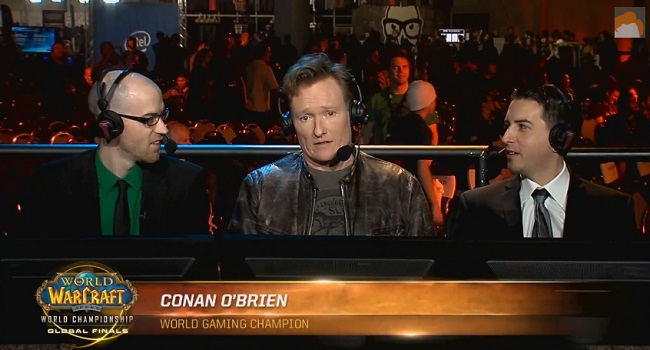 One of the more popular stints on Conan O’Brien’s talk show, Conan, is his “Clueless Gamer” segment. Conan attempts to play, and talk about, the latest video games, but he has no skill and is mostly providing the audience with comedic commentary about his lack of understanding. He points out obvious, yet easily overlooked quirks of the game, and by saying them in his typically monotone, it sounds hilarious. He frequently interviews die-hard players, game creators, or other people in the game circuit. Most recently, Conan visited BlizzCon ’13 and plays World of Warcraft for sixteen minutes, then commentates on the WoW Global Finals.

It is not uncommon for gamers to meet online, chat it up, then meet in real life and have long lasting relationships. This is also true for World of Warcraft Game Director, Tom Chilton, who admits to Conan that he met his wife while playing WoW. He explains, “She was a troll named Dead Rat. Very. Attractive.” Conan begins his segment by interviewing both Chilton, and the Production Director, J. Allen Brack. Brack actually sits down next to Conan to talk him through how to play.

While he is “learning,” Conan spends much of his time criticizing the game and characters in an amusing way. He notices that while stationary, the characters still seem to be “out of breath.” Brack actually explains away many of Conan’s quips, but ultimately gets shut down by the jokester himself as he rapid-fires one-liners or funny comments. He also interrogates Brack about the female characters of the game, and the two get into a discussion of how sexy the female Draenei is with her horns and tail. Conan seems mesmerized by the fact that one can, without actually playing, just turn and twist the character around, getting a great view of her butt or a profile of her breasts. Brack, at this point, seems to get a little bit irritated (or defensive) and claims ignorance when Conan inquires how many people just stare at the female characters and don’t actually play. Brack states, “At some point people are ready to take the next step.” Either Brack honestly just doesn’t want to believe people do this…or he’s done this himself a few times and Conan’s comment is hitting too close to home.

Begrudgingly, Conan takes that next step and begins playing the game, adding his own theme music as his character runs around. It is clear that Conan doesn’t understand many of the concepts of the game, such as why jumping in the snow is enough to kill his Orc who is protected with eighteen layers of armor. Without missing a beat, Conan simply says, “Design flaw.” Brack can only say, “…okay…” as the Orc comes back and Conan begins his exploration over again. The best part is when Conan attempts to chat with one of the real life players, a troll, who ignores him for a while, then finally asks, “u mad?” Conan, true to his over-the-top nature, explains that “mad” isn’t the word for what he is feeling, and he is actually about to “open a can of wuppass.” The troll then disappears from the screen, running away from Conan’s threats.

Conan now enters the World of Warcraft World Championship Global Finals, as a commentator. He literally comments on everything. EVERYTHING. He talks about the stone floor in the chamber the characters battle on! Some of his more informative comments: “I’m seeing a lot of flame…I’m seeing a lot of running around…It’s still snowing.” Conan openly admits he has no idea what is going on, but pretends like he does (he tells his co-commentators, “You don’t have to explain that to me…I’m a World Gaming Champion.”), which really makes it all the more amusing. He asks, at several different intervals, “Can you just tell me who won?” He is so animated and passionate, shouting along with the other two commentators, “Yeeeessssssss!! Incredible! Did you see what just happened?!” We almost forget for a few seconds that he’s just a big goof sitting in for some jokes.

The audience honestly seems less than enthused about Conan’s presence at the game, clearly they are taking themselves (and the championship) too seriously. He is there to have a good time, make a few jokes, poke fun at gamers and himself for not knowing anything about the games. He is not there to be mean or bully anybody. Many of the video comments have the same reaction as the audience. They are outraged that Conan would be allowed to disrespect the world of WoW at such a momentous occasion. It’s a skit! He does this all the time, and it’s funny. It’s funny if you are a gamer and can see how ridiculous he is to not understand what you know by heart, and it’s also funny if you are not a gamer because you’re thinking the same ridiculous thoughts. Click here to watch the short video and let us know if you think Conan is being purposefully malicious, or if he’s just being Conan.

Is it possible to make more of an Error 404 page?

…that was a terrible article. thanks, I guess?