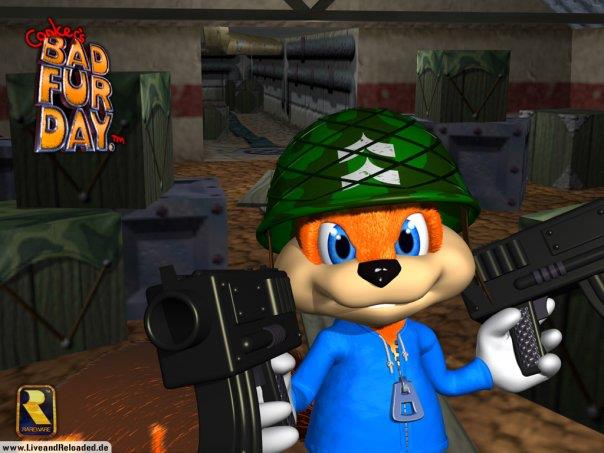 Oh, Rare Inc. It’s been so very long! You remember Rare, right? They were visionaries behind such masterful games such as Donkey Kong Country, Donkey Kong 64, Perfect Dark and the Banjo Kazooie franchise (at least the N64 ones; I like to pretend Nuts and Bolts didn’t happen). What’s that other game they made? You remember, that one that was supposed to fit in completely with the Nintendo 64 style of platformers? Oh right, it went in a COMPLETELY different direction to form the cult classic Conker’s Bad Fur Day.

Conker’s Bad Fur Day is a pretty legendary game. If you bring the title up to nearly any well seasoned gamer, they’re certain to laugh or crack a smirk or even respond with a “Oh, THAT game.” I remember being introduced to that game rather vividly. I was only a kid and I remember having liked playing as Conker a lot in Rare’s Diddy Kong Racing.

So, I naturally wanted to rent a game with a character I liked off the Blockbuster shelf. The game was crude, violent, and full of SO many sexual innuendos, as I’m sure you may know. Not quite a good fit for a little kid. A man named Chris Seavor was in almost complete control of the production of the game. Seavor not only designed the game, but he helped to write the screenplay, worked as a visual artist, and voiced over nearly every single male character. Don’t believe me? Go back and play it. It blew my mind when I figured that all out.

In the years passed, Rare was eventually bought by Microsoft and milked dry. After the release of the mistake known as Banjo-Kazooie: Nuts and Bolts, it was certain that Rare had officially gone down the tubes. Seavor left Rare a while back and went on to create his own independent game studio called Gory Detail Limited. He’s currently producing a platformer for the Wii U and 3DS entitled The Unlikely Legend of Rusty Pup.

There’s not much known about this newly announced game just yet, but man, is it ever exciting to know that it’s around. From what I’ve seen, Rusty Pup is very visually similar to older Rare games in terms of art style. Don’t expect anything too similar to Conker or the sort though. Seavor explains:

It’s a 2D platformer, but a with depth to it. You physically move in and out of the screen. It’s also got hints of Lemmings in there. The game has a core gameplay mechanic — and when I say mechanic I mean something you do which will effect something else in the gameworld — which we can’t say because it will give so much away! The main reason I’m being secretive is because we don’t know whether it works or not yet and until we’ve tried it properly, we won’t know. It will change. You put a mechanic in and even the simplest mechanic will throw out a thousand different problems.

While the gameplay certainly seems fun and ambitious, Seavor also makes it well known that the game is going to very heavily involved in terms of story. While Rusty Pup certainly won’t be as mature as Conker was, it will certainly have its serious moments. You’ll be controlling “Rusty” in the sense that you want to keep him alive. Seavor explains that he wants the player to feel so attached to that specific character that you want to make sure he’s nurtured and that he doesn’t die. He adds that “there’s a reason this character is here. He just doesn’t seem to know why.”

Chris Seavor seems to have a lot planned for this game, and I’m personally really excited that so much of it is left in the dark. I don’t know, when games put out too much information before the release, I feel it’s not worth playing or buying. Why spend money on an experience you already know everything about? Rusty Pup looks like it’s going in an exciting direction.

While no official date has been set, we know that The Unlikely Legend of Rusty Pup is going to be released sometime during 2014.