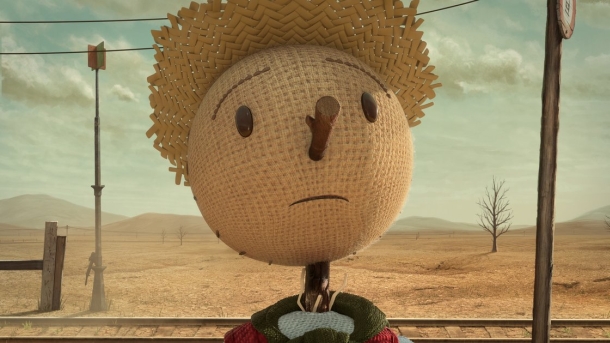 Is it an app? Is it an animation? Is it part of the vegan agenda? Nooo, it’s clever marketing! Up, up and Chipotle!

Scarecrow is a new game in the iTunes store courtesy of Chipotle (no love for us Android users because that would be silly!). But it’s more than just a game that gets people thinking about how much they love burritoes. It’s also got a nifty little animation attached to it.

Awwww, ethics and morals and food. OH MY!

Please, don’t mistake my cynical tone for one of dismissal. I love burritos and ethics. If someone wants to promote more ethical ways for us to get burritos? I’m all over that like guacamole on a chimichanga! This is a great animation, that makes my mascara run with sads.

But let’s not get confused about what’s happening here.

A touching animation, which stars one of the best known (though now least used) ‘tools’ of farming- The Scarecrow. He’s set to work by mechanized versions of the very things he was meant to protect the crops from. He becomes a cog, figuratively, in the mechanized processes of industrialized agriculture. Then finds new hope in the old ways! All to the soulful tones of Fiona Apple, who sings a song that triumphs the positive side of industrialization. (I’m not saying that the role of Willy Wonka’s character in Charlie and the Chocolate Factory is to destabilize the role of Union movements. But what I will say, is that his factory relied on cheap labor and he wore a lot of fancy clothes that hark back to the industrialization during the Victorian era. See? I can make everything bad!).

What we’re seeing is something that might be called ‘techno-marketing’ and it’s been happening for longer than most people realize.

When I was a young lass (back when mobile phones were for ringing people up, not taking pictures of your dinner) we used to receive unsolicited SMS ‘sales bargains!’, usually triggered by walking past a certain store. It was like a really boring version of a cat call.

Now, with ‘reward cards’ they can track exactly what we buy and we actually sign up for mailing lists! We like their Facebook Pages. We follow them on Twitter! But it’s not enough. They’re still looking for a way to stamp their logo into our subconsciousness. Now, they’ve found the path they have to take and this campaign by Chipotle perfectly demonstrates how they’re going to get into your brain-

They’re going in through the chest.

Here’s how it works, they use things everyone loves:

Animation. (I’m not saying that people who don’t love animation have something wrong with them, but it’s kind of like not loving puppies and kittens).

Games on their phone.

Chipotle took all the things that everyone loves and they made it into a marketing campaign. They created an animation that draws you in and makes you sad, but hopeful. They created an App that gets you involved. They gave you a name to consider when you want to eat, but you’re still feeling a bit guilty after seeing that sad animation of the factory farmed dairy cow.

Chipotle!
Will playing an app on your phone make you a more ethical consumer?

Probably no more than playing Dead Rising makes me equipped to survive the horrors of Z-Day. It might make you think about how you exist in the world and the choices you make. It could even help you discover Fiona Apple (if you didn’t already, honestly, how young ARE you that you don’t know who Fiona Apple is? What were you doing in the early 2000’s?!). But the only way to do something, is to actually do it. Not just think about it real hard, till it happens. YOU’RE NOT HARRY POTTER!

But then, that’s probably not their reason for marketing it to you. They’re positioning themselves away from the other brands. Albeit in a brave way, in the face of ‘Big Ag’ who now apparently have legions of mechanical crows.

Fortune favors the bold though, so I dare say this three pronged attack into our heart strings should get plenty of brains moving with the juices they inject. It may even get people doing the right thing!

But they might have also succeeded in something that has really, never been done before. Through this approach of animation, fun and a hope? They have vegetarians sharing their message. The one group that would be diametrically opposed to their general business-being fast food- now being one of the key marketers of their campaign because it talks to the evils of factory farming.

Dude, that’s the equivalent of the Skylander’s Facebook Page telling you to go buy the Disney Infinity characters!

They might also have succeeded in getting people to think a little more, which would be amazing. I love this animation.  Of course, this is the Internet so where there are people serious-ing, there are people lol-ing.

Here’s Funny Or Die’s interpretation of the ad. I like the way it’s cynical and stays in tune.

Which one do you like better? Do you think any of this techno-markting works? Am I far too cynical about this whole thing?