China Over takes US for Total Active Android and iOS Devices 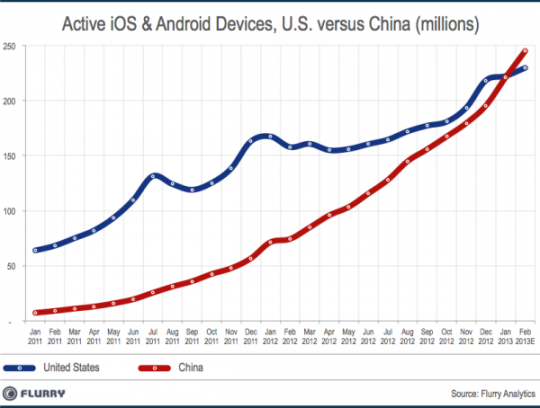 A year ago, Flurry said China is the top country with the fastest growing smart device market; and now, they have come up with something more interesting for the Chinese. According to Flurry, China has overtaken the US by a good margin for the total number of active iOS and Android devices in the country. This includes both smartphones and tablets running on both platforms.

The actual details coming from Flurry, state that in January the numbers were pretty even with the US, with 222 million and China with 221 million of active devices. Although, the final numbers for February are not in at the moment, Flurry is just making this announcement on expectations, as it “Expects” the numbers to go up for China. They expect China to have 246 million and US with 230 million devices.

Even though you may or may not agree with the research, come the end of the month, there is no reason to think otherwise – China will definitely overtake the US. Flurry also states that the US will never have the lead again. It seems highly likely considering the population of both countries, roughly 310 million for US and a staggering 1.3 billion for China.

Android and iOS Popular Around the World

Aside from these two countries, UK is in third with 43 million, South Korea fourth with 30 million and finally Japan, fifth with 29 million active devices. There are many other countries on the list, but those numbers are not so high, probably because of the population of those countries. Columbia, Vietnam, Ukraine, Turkey and Egypt are the top 5 fastest growing countries for Android and iOS market. Looks like smart devices are penetrating the mobile market in all countries, especially US and China.

What are your thoughts on these numbers? Do you think Android and iOS will take hold in more markets around the world by the end of this year? Let us know.