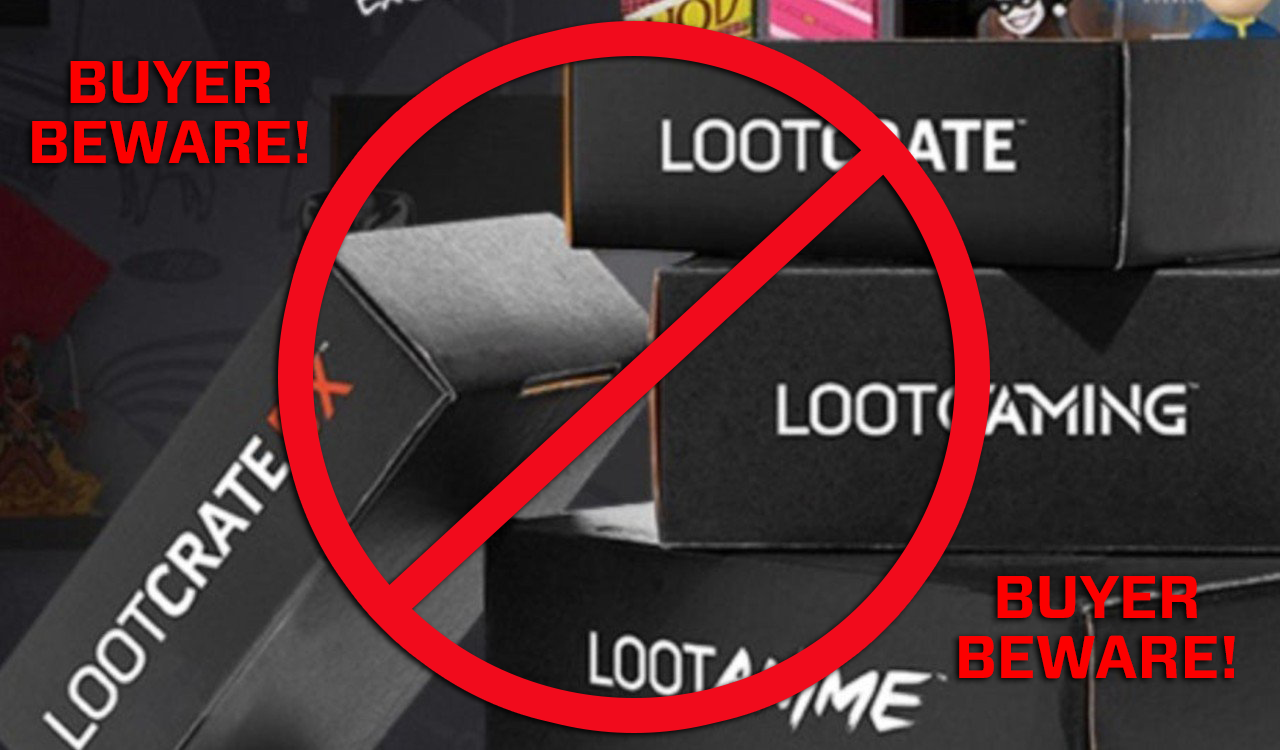 There have been quite a few “crate” companies over the years. From ones offering specific character or show collectibles, to the mystery hodgepodge or theme driven boxes from services like Loot Crate.

Generally speaking, the value of the merchandise normally exceeds your membership fees and these opportunities can be a cool way to get some unique collectibles. Throw in the fact that you can get exclusive Funko, Marvel or DC swag, and it’s no wonder we’ve seen these types of companies stay fairly popular.

To this very day I get emails from Loot Crate but from everything I’ve personally seen over the past 6 months, the only Loot involves looting our wallets.

When I took over as Managing Editor for Geek Insider, I started reaching out to renew and strengthen past relationships with sponsors. While waiting to hear back from Loot Crate, I convinced the owner to go ahead and sign up for two memberships – Loot Crate DX and an Anime Crate.

I would receive the DX and the Anime would go to Meredith for us to complete unboxing videos and articles. I figured with us paying for the membership as opposed to receiving it for free, we could provide a more objective review and really let you all know whether it’s worth it or not.

An “our loss is your gain” sort of thing. Well, I didn’t plan on our loss being quite this much.

Admittedly, I should have taken 30 seconds and did a Google search about the company first. Had I done so, I would have seen that they’d filed for bankruptcy with a reported $30 million in debt as of August of last year.

Oh… and $20 million in unfilled, paid customer orders that had not yet been shipped.

Now get this part, it was reported that in order to fulfill those “final” shipment promises, they were being sold to Loot Crate Acquisition LLC and would use funding from one of their investors, the lending company Money Chest LLC to get square on the backorders.

Furthermore, the CEO and co-founder, Chris Davis, was quoted in the official press release as saying that as the bankruptcy process played out, current subscribers wouldn’t see any changes in their Loot Crate monthly shipments and daily operations would go on as normal. Apparently, they meant their new normal of continuing to build a ton of unfilled, paid customer orders.

Because all is not as it seems.

Bankruptcy Protection is Fine, But…

Before the announcement of the bankruptcy, there were signs that the company was in trouble. Since at least May of last year there have been reports of lower quality merchandise and subscribers going for months on end without receiving the crates they were still being billed monthly for.

So, Loot Crate announces they’ve filed bankruptcy in August and say they have plans to catch up the delinquent orders, while staying on top of current and new subscriptions.

Hell, numerous companies have undergone bankruptcy and came out the other side better and even bigger than before. Of course it can be done.

No matter what, you’d think that when we signed up at the end of November, a full 3 months after their supposed restructuring, that things would be rocking and rolling along.

Well, not in Loot Crate’s case.

Not by a long shot.

No Christmas, or ANY, Loot from Loot Crate

Thanks to a small note on sign up, we were aware that the December Loot Crates would be delayed a week due to the holiday, but we were looking forward to evaluating the “new” company and loot shortly thereafter.

Christmas came and went… no notification from the company.

Ok, we’ll get TWO boxes in January to check out. Cool deal.

When February came and went and we still hadn’t received a single box, we started figuring something was up.

That’s when I did a bit more digging and saw that $50 million debt.

We canceled our subscriptions but were charged yet again for March.

Yep, they still charged us for both the anime and DX accounts.

This time, we canceled through PayPal and disputed the charge.

Wait, I’ve Seen This Scam Before

By the time we canceled our 2 subscriptions, we were owed 4 DX and 2 Anime crates.

So, they stepped up and sent us all 6 boxes and made everything right in accordance with their bankruptcy, right?

It wasn’t until the very last minute that they even responded at all. Just as PayPal was set to automatically judge in our favor, Loot Crate refunded a portion of what we’d paid and gave tracking info for the single DX crate they shipped that same day.

Fed Ex tracking shows that they did indeed ship something, but I never received it. Whether it was porch pirates or an unscrupulous driver, thanks to the “no signature required” delivery method, we’ll never know.

You’d think that being unable to fulfill orders and falling at least another 6 months behind from where they were before the bankruptcy that the new Loot Crate Acquisition LLC would be halting everything in its tracks. But nerp… I still get emails almost daily from Loot Crate attempting to entice me back with “Exclusive Black Widow gear” and a “TMNT Limited edition series” most recently.

“Due to the ongoing developments with COVID-19, import and transit times of products have been globally affected. We anticipate some crates being delayed a few extra weeks at this time. Thank you for your understanding.”

Something Doesn’t Add Up

They reported $30 million in debt and $20 million in overdue shipments and on their own FAQ page they state that “our buyer is providing us with new financing which allows us to continue daily operations and our goal is to fulfill all of your subscriptions (past, present, and future)”

Yet just a little below that is this bombshell

“the commitment for up to $10 million in new financing will support our goal of delivering all outstanding orders to the best of our ability and as soon as possible.”

So they only got financing for half of the backlog.

And here it is almost 9 months later and they still can’t fulfill new orders.

“you can expect updates on any past deliveries soon”

I have no doubt that COVID-19 is affecting their service levels, but they aren’t being truthful with their members and potential new subscribers at ALL.

At this point it seems really clear to me that they’re robbing Peter to pay Paul by taking in the monthly subscriptions in order to send out the $20 million and growing backlog of shipments. Only sending out current shipments when someone attempts to cancel or raises enough stink.

Not only do they appear to be using bankruptcy as a means to continue this Ponzi scheme, now they’re even using the COVID-19 pandemic in an attempt to cover their tracks.

With the court systems also stopped and now backlogged due to the pandemic, these possible illegal activities could go unchecked for quite some time to come.

Learn from our mistake folks. Stay away from Loot Crate and if you’ve been waiting for your shipment, be sure to let us know below just how long and how many boxes they’ve ripped you off so far.