Angry Birds have been in the business for quite some time now. There might be some players who have become a little bored with this widely popular game and want to try something new. If you are one of them, you will want to check out Shoot the Apple.

Droidhen, a popular developer of many well-known Android games, is the brain behind Shoot the Apple. Another fun-filled and engaging Android game, it tests the physics concepts of the player with an exciting puzzle game environment. Appearing as simple at first glance, the game gets more and more challenging with the every new level that you uncover. If you have access to an Android device, this is the next game you will want to keep you busy, without a doubt.

The main motive of the game is to hit the grinning and kissing apples with aliens using cannons. Doing this is not that easy as it sounds. There are a variety of hindrances, from blocks to moving objects and spinning platforms that can restrict your aliens from reaching the apples. The complexity keeps on adding up as you move to the higher levels.

Shoot the Apple is one of the more popular physics puzzle games in the recent times. The game is all about using the right angles and distances. You need to use your finger touch to place the target in a way that the alien is shot by the cannon at the right angle and with the required power. Remember that the cannon can fire alien with more power if you place the target at a greater distance.

The game has more than 400 levels, each full of unique challenges that make the game super exciting. Add to it a number of themes like mechanical tree, moon time, beach fairy table, Sax city, snow odd and space walk and the excitement reaches a whole new level. With the rising popularity of the game (evident from high download figures), you can expect new levels and themes to come forth in the near future. 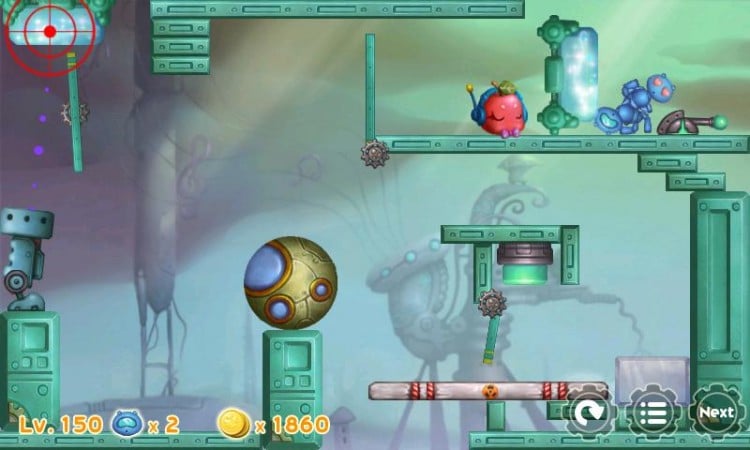 How to Keep Moving

To keep moving further in the game for free, you need to gain 3 stars at every stage. This can be made possible by hitting the apple with the lowest possible number of aliens and earning coins. If you fail to do so, the game offers the option to buy coins in order to reach the higher stages. Practicing the correct angles should help you earn enough coins by shooting fewer aliens.

Shoot the Apple has slick graphics and good background music to completely absorb a player’s gaming mood. While the prices to buy coins are higher than expected, you don’t need to spend that money if you become a pro shooter with practice.