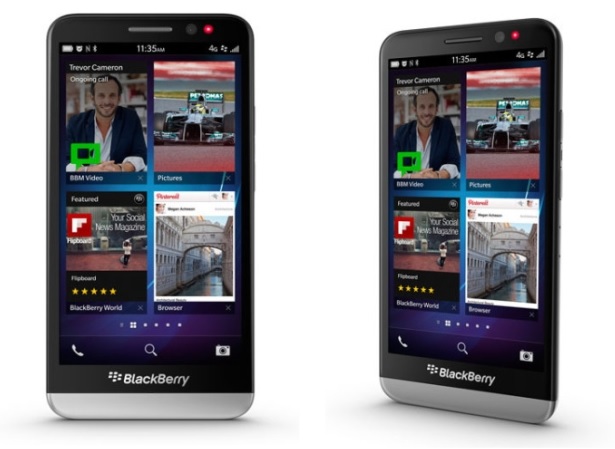 BlackBerry has announced it’s biggest phone yet. Called the Z30, the company is describing it as its “fastest and most advanced” phone yet.

The BlackBerry Z30 will replace the Z10 as the company’s flagship phone. It is the 4th in the new generation of BlackBerry devices, after the Z10, the Q10, and the Q5.

“The smartphone rounds out the BlackBerry 10 portfolio and is designed for people looking for a smartphone that excels at communications, messaging and productivity. Having apps like the full Documents To Go suite that comes pre-installed, together with its 5-inch touch display, the BlackBerry Z30 smartphone gives you a best in class productivity experience on the go.” – Carlo Chiarello, Executive Vice President, Products, BlackBerry.

Sporting a 5 inch screen on a Super AMOLED display, the BlackBerry Z30 will be powered by a dual-core Qualcomm Snapdragon S4 Pro processor clocked at 1.7 Ghz. The graphics will be supported by a quad-core Adreno 320 GPU. 2 GB of RAM will come onboard the device. The inbuilt storage capacity will be 16 GB – this can be expanded with the microSD card expansion slot.

On the back will be an 8 megapixel camera with Auto Focus, BSI, and an f2.2 aperture lens. The camera will record video at full HD 1080p resolution. It’s counterpart on the front will be a 2 megapixel shooter with Fixed Focus and 720p HD video recording capabilities.

The connectivity options will include 802.11 Wi-Fi a/b/g/n, Bluetooth 4.0 Low Energy, NFC, GPS, AGPS and DLNA. There will be support for 4G LTE networks, of course.

All of this will run on a healthy 2800 mAh battery. BlackBerry is promising a battery life of 25 hours.

The handset will run the latest version of BlackBerry’s OS – BlackBerry 10.2. The new update is expected to be made available to other devices – such as the Q10, Z10 and Q5 next month.

The device is slightly on the thicker side, given how slim flagship phones are these days. The Z30 measures 140.7 x 72 x 9.4 mm and is considerably heavy at 170g. BlackBerry has put in some extras of its own – such as a new antenna, which the company says can get you coverage even in areas with poor network connectivity.

BlackBerry has been having rough times lately. Sales have been continuously dipping, and the company has been contemplating selling itself as it struggles to keep a hold on a market dominated by Android and iOS. BlackBerry will be launching it’s famous BlackBerry Messenger to both these platforms on Saturday, 21st September and Sunday, 22nd September respectively.

The BlackBerry Z30 should hit the UK and Middle East by next week. There is no word on the pricing as of yet.