Diablo 3 has just been released for home console to critical acclaim. It has been described as the definitive version of Diablo 3 and an all around awesome game. In commemoration of this event I want to talk to you all about the real Diablo 3. Many hardcore fans of the Diablo series were…unhappy with the changes that Blizzard made to the formula. A shift in design, items, graphics, and overall atmosphere led some fans to outright reject the game as a successor to Diablo 2. Luckily for those die hard fans there was a game released worthy of carrying on the spirit of Diablo 2, that game is Path of Exile.

Path of Exile is carrying on the mantle of great loot based action RPGs. It is pumped full of the typical hordes of enemies that drop insane amounts of loot. Hack and slash your way through the monstrous masses to gain experience, items, and gold in order to improve your character. There isn’t really much of a difference to be drawn here between D3 and Path of Exile. Sadly PoE starts out a little bit slow in the combat department as your character is just starting off. You don’t get the mass slaying power of a D3 character to start with, instead that power must be earned.

Every enemy has the potential to put and end to your heroism when you’re starting out. As you progress further you become more able to take on larger and larger groups of enemies with relative ease. By the time you’ve manage to become an AOE death machine you feel you’ve damn well earned it by not being devoured (or being devoured and not giving up) early on. Click to attack and use hotkeys to activate magic spells and skills, it’s nothing spectacular but it is the functional system that we’ve all come to know and love.

Okay maybe masses is a bit of an over statement, but there are enough to cover what’s needed. PoE very simply breaks the classes down based on their primary attributes: Strength, Dexterity, and Intelligence. Thehe Ranger is the dex based class that focuses on evasion, attack speed, ranged combat, and multiple weapons. Meanwhile the Witch is intelligence based and focuses on mana, spells, energy shields, and criticals. Finally the Marauder is strength based and focuses on health as well as raw damage in melee. In between each of the three attributes there are additional classes that straddle two different stats. For instance the Shadow utilizes the benefits of both intelligence and dexterity creating an entirely unique class. 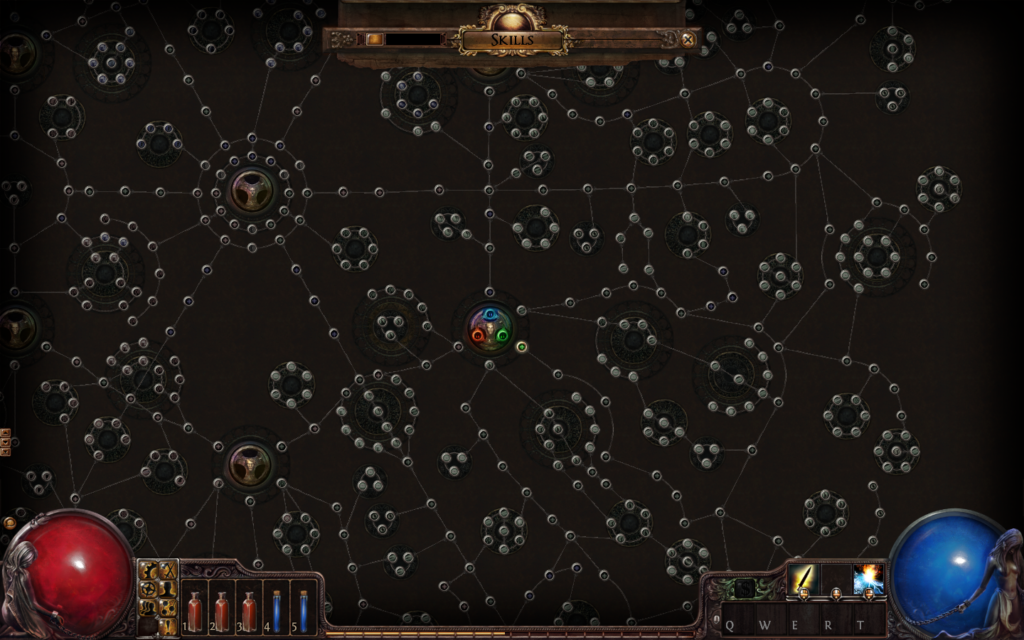 The Skills That Kills

Unlike many other games in the genre PoE has decided to tie active abilities to gems that are places within your gear. Many players will already be familiar with the idea of placing gems into items with sockets. Unlike in other games the gems in Poe determine which active abilities are equipped on your character. Each gem is colored to match one of the three primary attributes and requires a minimum stat to equip. If you want a powerful strength skill, then you need to have the prerequisite strength to wield its power.

As your character levels you so do the gems your character wields. They get a small percentage of your experience when they are equipped and grow in power as they level up. This means that the skill gems you have slotted in the most are going to be your most powerful gems. As the gems level up the prerequisite stats in order to utilize them also goes up. 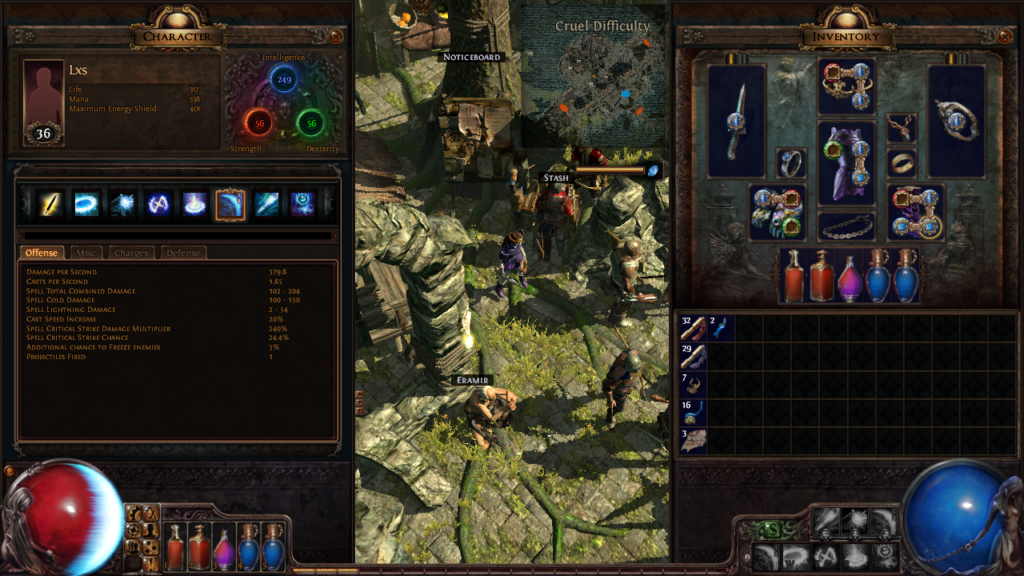 Some gear has the gem sockets connected by a line letting you know that those sockets interact with each other. Through these linked sockets you can customize how abilities function in the game. If you have the ability to fire a poison arrow then putting a “split” gem in a linked socket will cause you to fire a spread of poison arrows instead, or put in a gem that will cause the arrow to bounce between foes. There are numerous different passive gems so there are many different options when it comes to customizing your abilities. This gives an incredible amount of variety between characters in the game.

Finally I want to talk about the extensive passive skill tree in PoE. If you’ve seen the sphere grid from Final Fantasy 10 then this will sound familiar. As your character levels up they game points to be placed into a sprawling tree of passive bonuses. Through these passive skills you can increase your stats and get special passive effects. Each class starts in a different portion of the tree reflective of their primary attributes. This is one of the best things about PoE as the skill tree combined with the customizable abilities makes almost every character unique. 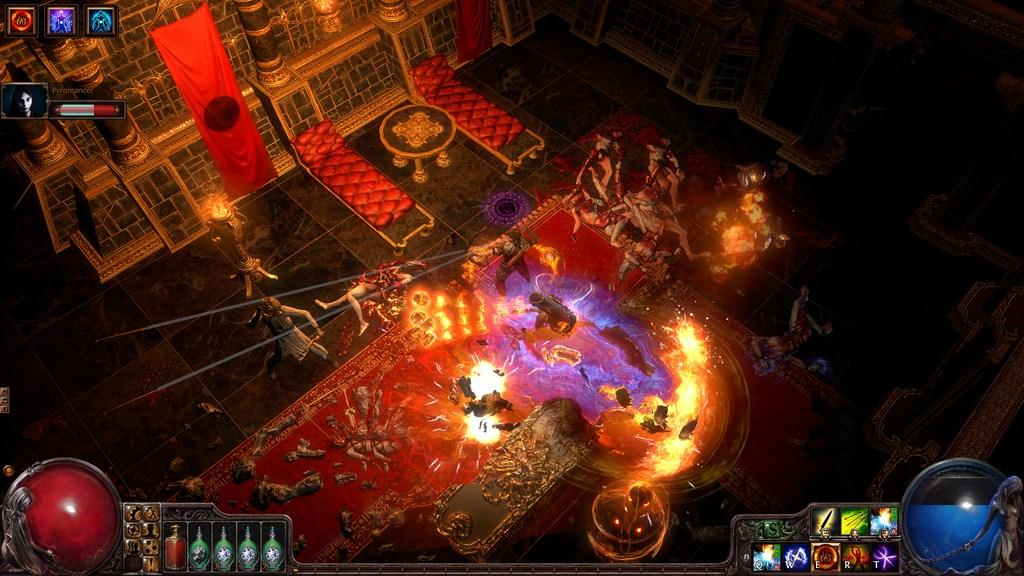 The Path of Exile loot system is similar to just about every loot system you’ve ever seen in an action RPG. As you slay monsters they will drop crap tons of loot for you to gear up with. These items are split up into different color coded tiers that range from non-magical to legendary and unique. With the typical crazy range of different gear you can get the options are almost endless for your character.

There is no gold currency auction house to be found in PoE. Everything in the game can be traded to other players in a barter system. Since there is no standard currency in the game, you instead trade a number of different orbs. These orbs are not just for trading though as you can use them to upgrade and alter the qualities that items possess. The orbs are pretty cool because they allow you to alter that powerful weapon you have that happens to have the wrong gem slots on it, in to something you’d like to use. Using the orbs as currency too makes it an interesting decision to horde the orbs for your own or spend them on gear. 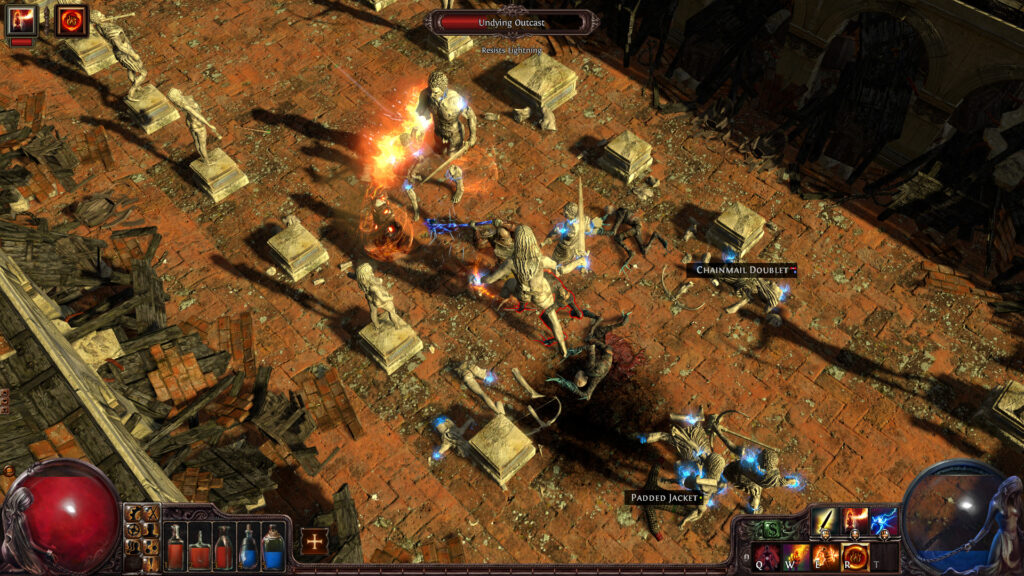 PoE manages to be a pretty good looking 3d game without losing the awesome atmosphere that Diablo 2 had. Whenever I played Diablo 3 I felt like there was less genuine horror in the game and more cartoonish flair. PoE manages to keep that pervasive sense of dread that constantly hung over D2Nobody is going to write any particular praises of the music in PoE but it certainly does a fine job maintaining the feel of the game. This is really the area that keeps PoE feeling like it truly belongs in the Diablo Franchise. When you log into Path of Exile you feel like you’ve come to a ravaged land where horrors exist around every corner.

Don’t be ridiculous, you should just get both. PoE is completely free to download and play, so you might as well spend that saved money on D3. While I do genuinely believe that Path of Exile is a better follow up to Diablo 2 than D3 is, D3 is an awesome game in its own right. Now it has a console version which promises to be the best version of the game yet. D3 is great for a casual session while PoE plays great as a hardcore game, there is room for both in my game library.