Home News Blackberry 10 Release Still a Mystery? Maybe Not So Much…
News

Blackberry 10 Release Still a Mystery? Maybe Not So Much…

Old-school Blackberry enthusiasts everywhere are chomping at the proverbial bit in anticipation of Research In Motion’s (RIM) release of their new Blackberry 10 line. Yep, just when you thought the Blackberry era had ended, here they come again. Long, sleek and sporting a full touch screen, the new Blackberry 10 is oddly similar to the iPhone 5. However, there is the option of getting the model with a signature full-qwerty keyboard for all those really dedicated fans. On the 30th of this month, RIM has planned an event to launch their new Blackberry 10 to the public. They haven’t, however, told anyone when the actual release date will be.

It seems like RIM is remaining staunchly silent on the topic despite the insane amount of rumors flying about these new phones. From specs to appearance, it seems like almost everything that could possibly leak, has. Everything accept when the phone will be available to the public. Although RIM had promised to announce official information such as the price and the release date at their long-awaited launch event on the 30th, it’s just not good enough for those crazy die-hard fans.

Enter Best Buy. Make that Best Buy Canada, actually. It seems as though they may be the culprit in the release of some pretty sensitive Blackberry 10 information. Allegedly, an exposing image made its way on to the web sometime last week that contains the Blackberry 10 “street date” information for Canadian cell carrier, Bell. The image seems to be a snapshot of Best Buy’s internal inventory system. 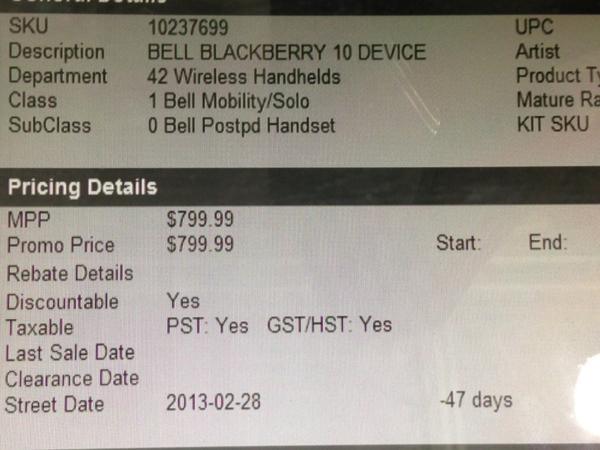 A Best Buy employee likely (obviously!) took the shot and uploaded it to the web. I don’t know about anyone else, but I think this scenario rings a little reminiscent of the Best Buy/Samsung Galaxy III leak that happened last year. Oh yeah…didn’t that end in a pretty ugly lawsuit?

Either way, the internal inventory system at Best Buy Canada pins the date of the Black Berry 10 release as February 28th, 2013. Of course, this has everybody and their Blackberry-loving mama in an uproar in an attempt to figure out whether or not there is any truth to the image. BGR actually contacted RIM and asked them to comment of the validity of the information and (surprise, surprise) they refused to have any part of the speculation. RIM responded to inquiries by saying:

“We understand there is a lot of excitement for the Blackberry 10. We will launch the platform on January 30th and until then we will not comment on speculation.”

Although no one knows for sure, if you ask me, that kind of response just screams ‘annoyed-because-you-found-out-our-secret’. The photograph is pretty legit-looking and if it actually is real, all that’s left to wonder is when Best Buy will be filing their next employee law suit.