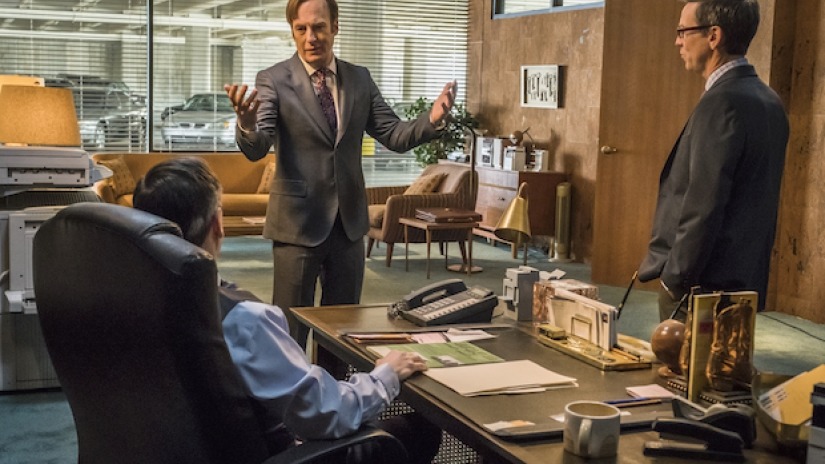 We all wear masks from time to time. It’s a skill we learn at a young age—we’re taught not to let people see who you really are. We learn to let them see what we want them to see. It’s safer that way. We’re afraid that, if people really get to know the “real us,” they’ll be disappointed with what they see. So we go through life pretending for all but a very close few.

But wearing a mask can be exhausting. And if you do it long enough, you just might get to the point where you’re ready to just say, “Fuck it. This is who I am.” And so you take off the mask, put it aside (at least for a little while), and see what happens.

Better Call Saul is a show about people pretending to be something they’re not, for various reasons, and to varying degrees of success. In fact, one of the promotional pictures on the show’s official page at AMC.com has Jimmy McGill holding a smiling Saul Goodman mask over his own very sad-looking face. And that’s a pretty accurate metaphor for the show—the face that ends up being plastered on Albuquerque bus stop benches will be the one Jimmy wants people to see, while a very different face will stare back when he looks in the mirror.

However, I would argue that, emotional states aside, the Saul Goodman persona may actually be closer to Jimmy’s true nature than the tortured soul we’ve seen over the last three seasons. Jimmy’s tried to be a good brother, and he’s even tried to be an honest lawyer (for the most part). But it’s been a struggle. And what we’re starting to see this season is the transformation we’ve all been waiting for, but maybe it’s not really a transformation at all. Maybe it’s just Jimmy letting go and being who he really is.

I realize as I’m typing this that this sounds an awful lot like the argument Chuck made for years—Jimmy’s just no good, he’ll always be a disappointment, etc. But that doesn’t mean Chuck was right. And it also doesn’t mean that he wasn’t a pompous, overbearing douchebag who pretended to be a crusader for the law when he was actually just using his legal talent to feed his own ego and make everyone around him feel like shit.

But Chuck’s opinion of Jimmy became a self-fulfilling prophecy. All their lives, Chuck (and maybe others) made Jimmy feel inferior long enough that he eventually bought into it and, on some level, embraced it. And so, in a very warped way, Jimmy’s efforts to be an honest person have conflicted with what became his “true” nature. But now, with Chuck out of the way, he can take off the mask and be himself. He’s not quite there yet, but we’re beginning to see flashes of the ambulance chaser we all know and love.

At his first job interview, Jimmy almost makes us believe he wants to sell copiers. And, in the beginning, maybe he does. He’s always been a salesman first and a lawyer second, so it wouldn’t be a bad fit. But arguing yourself into an offer of a job you don’t really want just to prove that you can, then making the interviewers feel incredibly stupid for offering you the job in the first place? That’s truly impressive.

Plus, the interview with Neff Copiers will potentially pay off in a very big way. He spots an M.L. Hummel figurine in the owner’s office, which he later discovers is worth almost $9,000. And he knows just the guy to hire to break in and steal it (Mike). He tells Kim he has a couple of other job leads, but I’m guessing that his primary source of income during his suspension won’t involve a cubicle or a dental plan.

Speaking of Kim, she’s also tired of pretending (at least to Howard, anyway). She has no problem letting Howard know exactly what she thinks of his efforts to assuage his own guilt over Chuck’s death at Jimmy’s expense. And I’m sure that, if Chuck were still around, he’d be getting an earful as well. It’s obvious that she truly loves Jimmy, and she’s had it with people in positions of power taking advantage of him. Even in death, Chuck knows exactly how to make Jimmy feel worthless, and she’d rather handle Jimmy’s meager portion of the estate herself than make Jimmy deal with Chuck’s memory one second longer.

(Side note: if you’ve seen Breaking Bad (and I’m going to assume that, if you’ve made it this far with Better Call Saul, you have), you know that Kim isn’t a part of Saul Goodman’s life. I really hope Jimmy doesn’t eventually do something to drive her away, because she’s the best thing he has going for him right now, and it’s going to be really sad if he blows that up. But I’m not optimistic.)

Mike seems to be doing some pretending of his own where Lydia and his new “job”are concerned. I mentioned last week that Mike broke into Madrigal’s Las Cruces terminal and poked holes in their security to justify his hefty salary (even if the money is already his). And that’s the story he’s sticking with as he reveals his plan to repeat the process at Madrigal’s seven other locations. However, my guess is that he wants to show Gus his value and land a more permanent spot on the team. Since we know how his story ends, I’d say that’s a pretty safe assumption.

Of course, Gus Fring is the absolute master of hiding your true nature and showing the public just what you want them to see. Mild-mannered restauranteur by day, drug kingpin and cold-blooded killer by night, Gus plays the “hiding in plain sight” game better than anyone. He now knows what Nacho did to Hector, and he uses the information to pull Nacho even deeper into the drug trafficking world that he’s been trying desperately to get out of with no success (much to his father’s chagrin). Hector’s heart attack and accompanying stroke that Nacho precipitated have now made things worse instead of better.

Oddly enough, Gus is determined to get Hector the best medical care possible, bringing in his own personal doctor as well as a specialist from Johns Hopkins. As much as we know Gus hates Hector, the only possible explanation for Gus wanting Hector alive and fully functional is so the old man fully feels and comprehends the entire experience of his own death when Gus finally decides it’s time. After all, Gus gets to decide what Hector deserves—no one else.

Want to bypass Netflix’s proxy blocker? You need a ‘stealth VPN’ with obfuscation