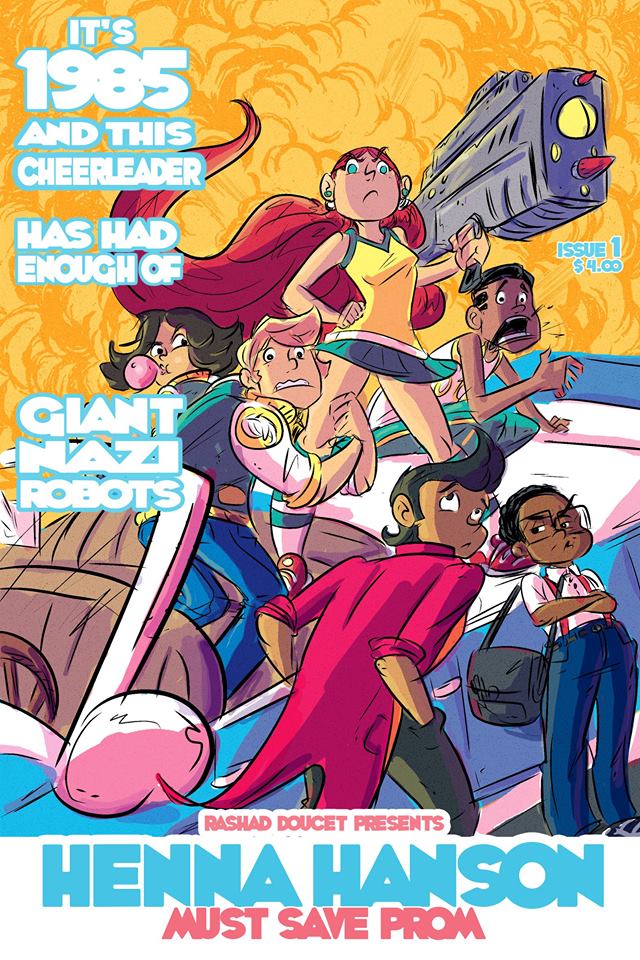 Last month, Jey Odin, creator of Chicken Fighter  from Antarctic Press, drew Burrito about me as ‘Apocalypse Jessie’ and had it published on USA Today as a surprise birthday present. I started thinking about what it takes an idea stemming from things like a conversation, daydream, or random thought and developing it into a marketable story. What does it take to get it to a complete, finished story? I spoke with Rashad Doucet, an artist who has worked with Oni Press, LucasArts, is an artist on Rag Tag at USA Today, and creator of My Dog Is A Superhero from Devils Due Digital, and creator of Henna Hansen Must Save Prom available on Comixology. He told me about how the creative process works for him, and what steps he takes to create a finished product.

Doucet is inspired by TV, movies, books, and life. He looks at story telling as an art in itself, and tries to use methods that haven’t been used often. He likes to combine two worlds “something normal and relatable plus something that’s fantastical.” This lets his characters have two parallel plotlines; some kind of internal or social struggle while they’re dealing with the conflict from the fantastical elements. For example, Henna Hansen is a typical, shallow 80’s high school cheerleader that wants to go to prom. She is shallow, and when she discovers that they are being attacked by Nazi robots, she tries to save the prom not because it’s the right thing to do, but so she can fulfill her dream of going to prom. “I wanted to show that not every hero has a heart of gold, she incidentally saves everyone because she wants to go to the prom so badly,” Doucet says.

His method of storytelling involves David Mamet’s idea that every story must: have drama and/or a specific goal that the character is conflicted with, have purpose including why the character cannot easily overcome this conflict, and have a reason for the audience to be interested in that character at that time. To do this, Doucet stresses, “you have to catch the character at the moment something out of the ordinary has happened.” It’s also important to have the introduction/exposition that introduces the conflict and why it matters, the main characters solving the problem and a dramatic climax, and a last part that wraps up all of the conflicts introduced throughout the story. Doucet prefers his stories to have concrete resolutions instead of endings that leave the audience with more questions.

Once he has a fully developed idea, Doucet creates a rough outline with some dialogue to guide his thumbnails. After the outline is complete, he thumbnails the entire story. Dialogue is very important to Doucet, he believes you need to focus on what actually should be said instead of shown in the scene. “Every background will reflect the character or mood; you just take those things in without thinking about it,” Doucet says. He changes the dialogue up until the very end getting the words and moods just right to convey what a character isn’t saying as well as having them sound human and relatable. He also says that he will draw a page over and over to get the scene as a whole right rather than focusing on a single object or detail within the scene.

Once you have a finished story, the next step is to think about where you want to pitch it. Doucet points out it’s important to consider what a company usually publishes, and submit your idea to places that publish similar stories to yours. If you already have a fan base that follows your work, that will help you. If not, then “the company’s name will help you sell your product until your name does it for you,” Doucet explains. A large part of comics is finding ways to market your products. For comics, this is a more restricted thing than for movies. Mainly the focus will be on magazines and putting your name out there online to get people to want to read more and see more of your work. He says one of the hardest parts of marketing your ideas and selling a story is figuring out what people like, “there is no perfect formula.” If you can get people hooked and talking about your product, that will help make it successful in regards to sales.

Another thing to think about is that an artist isn’t always working on their own story. When working with someone else’s ideas, Doucet explains that “you add your own aspect to the characters and story through your art, but it’s about fine-tuning their ideas.” He also says one of the most important tasks is to find a happy middle between their vision and yours, and the less experienced the writer, the harder that can be “because somebody has to make the decision on how this is going to look and where to cut panels they wanted to have.”