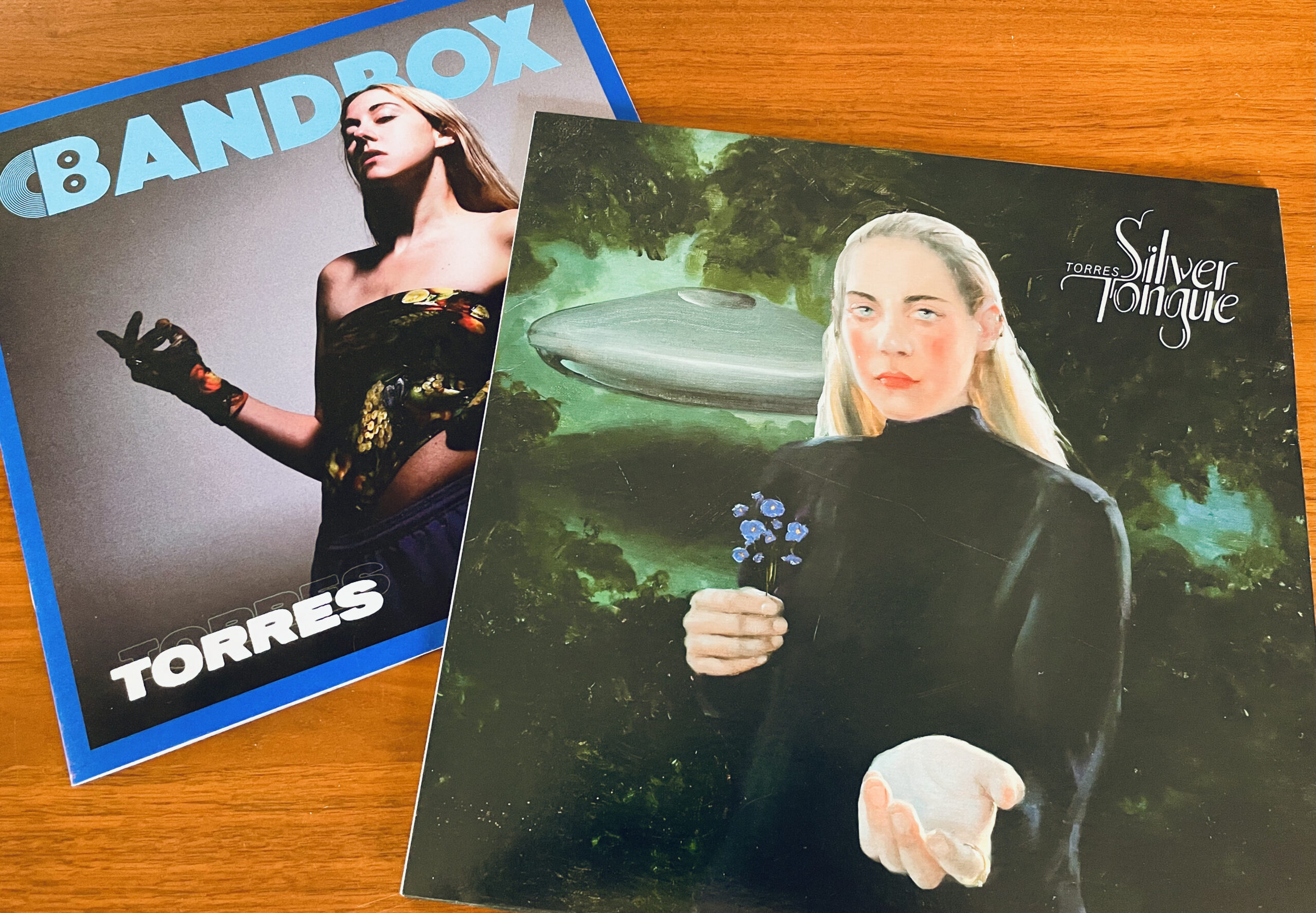 Did I mention Bandbox even offers FREE SHIPPING for members? They do. And it’s the icing on the record club cake. So what’s in this month’s Bandbox? An indie diamond from the perennially overlooked rocker Torres.

If you’ve been following the indie rock/indie pop scene for the past decade or so, the name Torres should be very familiar, ’cause she’s been cranking out immaculately orchestrated albums on the regular. And yes. Team Bandbox has not only featured one of Torres’ best, but pressed it on a super stylish, exclusive color-way, and boxed it up with fan-zine that gives new meaning to the term “deep dive.” Here’s a quick look.

We’ll get to that exclusive, colored wax shortly as it’s a legit work of art. But for now, let’s marvel at the artworks adorning the front and back covers of Silver Tongue, ’cause they’re both well worth a few minutes of gazing.

Before we dig the wax out of that sleeve, those who still like to take digital copies of an album wherever they go will be happy to know there’s a digital download code included with the very earbud friendly Silver Tongue.

You probably noticed that Silver Tongue is kind of a new record. I’m not typically a fan of recent releases getting featured for record clubs, if only because they’re usually available for much cheaper elsewhere. I’ll make an exception here, because it’s great to see Torres getting the spotlight. And If you know anything about Torres’ path to releasing Silver Tongue, you know it was filled with twist and turn.

The album was released by indie powerhouse Merge Records, and it was indeed the first Torres put out after being dropped by her former label 4AD. If you’re wondering why the latter dropped her, it seems Torres’ lone 4AD release – 2018’s brilliant Three Futures – never found much of an audience upon release. Per the artist herself, the lack of commercial success led the label to terminate a 3 album deal.

In doing so, the label missed out on the chance to release her far more successful followup. As you might’ve guessed, that followup was indeed 2020’s Silver Tongue. And one can only imagine the folks at 4AD were kicking themselves for letting Torres go after hearing it, because it’s her best album to date. And yes, with the backing of Merge, the album was also one of her most commercially viable.

Despite the relative success of Silver Tongue, and past Torres efforts like 2015’s Sprinter, she still feels like one of indie rock’s more egregiously overlooked talents. If you’re hot to get to know her music, the crunchy grooves, emotive moods, and often disarmingly introspective ditties that form Silver Tongue are about as solid an entry point to her sonic world as you’ll find. Likewise, this Bandbox edition is a sexy as you’ll see in the marketplace.

And hey, if you’re dying to know more about Torres’ work, or the make of Silver Tongue specifically, you’ll find all the info you need in the included Bandbox zine.

Oh, and about that wax I’ve been alluding to, I’ll just say the wow-factor is real with this one, folks.

Believe it or not, it sounds every bit as good as it looks, too.

The great thing about Bandbox is that they ultimately leave the decision-making up to you. So if you’re looking to snag a copy of your fave band’s most popular album on snazzy colored wax, you can totally that. And if you’re hot to take a spin with something you’ve never heard before, well, options abound in the Bandbox vaults. Happy spinning, gang!