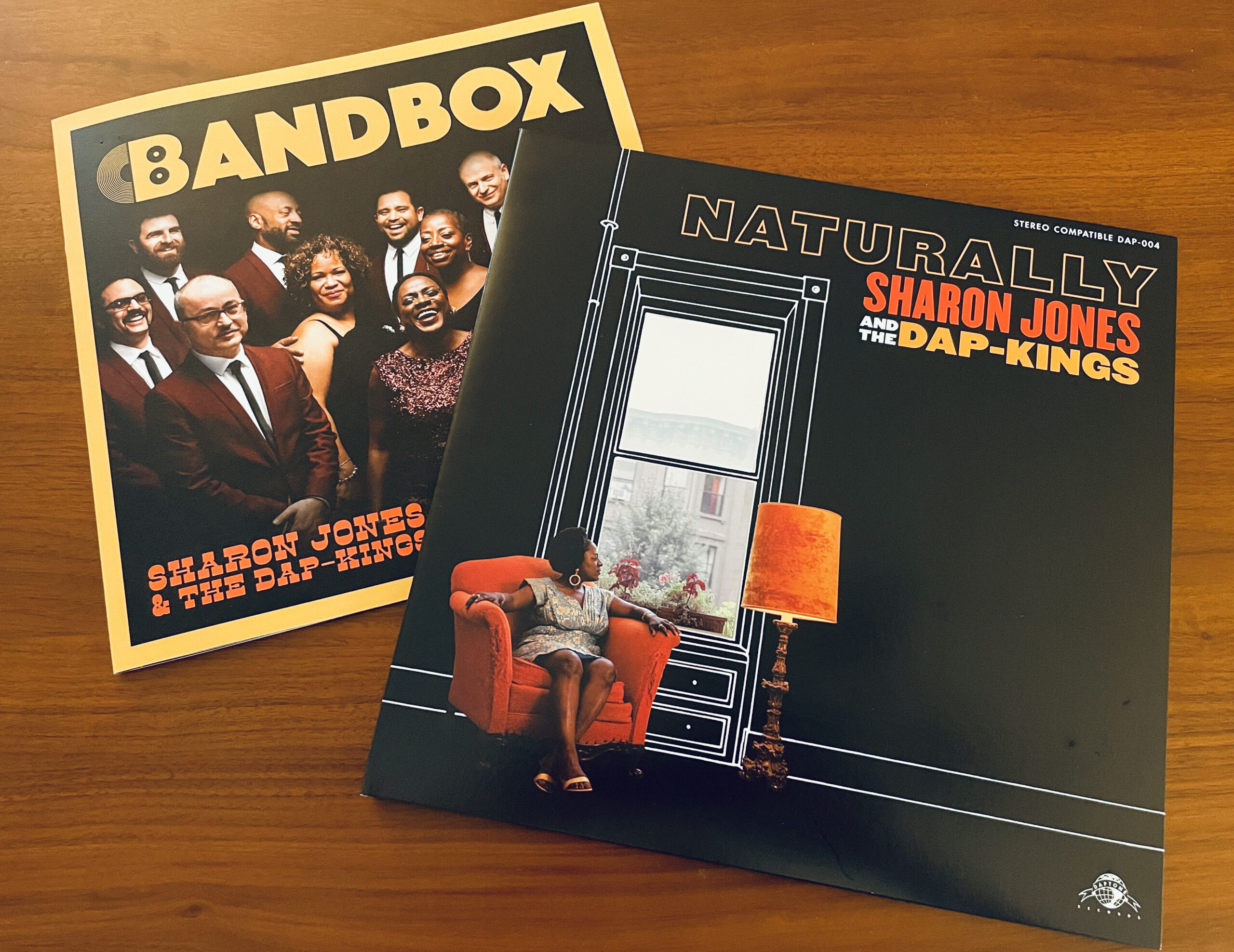 Did I mention Bandbox even offers FREE SHIPPING for members? They do. And it’s the icing on the record club cake. So what came packed away in this month’s Bandbox? A neo-soul stunner from Sharon Jones and the Dap-Kings.

Like fellow Bandbox alum Charles Bradley, Sharon Jones became a sensation later in life than most soul stars. And much like Bradley, her reign proved all too brief. Thankfully, Team Bandbox chose one of Jones’ best albums, pressed it on a killer exclusive color-way, and boxed it up with fan-zine that gives new meaning to the term “deep dive.” Here’s a quick look.

That’s a gatefold sleeve there, btw. But you’ll want to flip it up to get the proper view of Jones’ backing band inside.

And there’s a full cast list on the back cover too.

To be clear, Naturally is very much an album worth cranking through your ear buds on the train, or when you’re kicking around the neighborhood. Thankfully, it comes with a digital download so you can do just that.

If you’re anything like me, you’re tend to be wary of the the term “neo-soul.” There’s good reason for that, as the world of modern soul music has arguably conjured far too many pretenders appropriating a retro sound for – intentional or not – little more than kitsch value. There have, however, been a handful of proper soul stars to rise in the last couple of decades or so, and few shined brighter that Mrs. Sharon Jones.

Like many of the best modern soul artists, Jones’ ascension didn’t begin until later in life… meaning the singer (who was born in 1956) was both alive, and engaged with the ’60s and ’70s heyday of the funk and soul music scene. And yes, she was also actively seeking her own place in it circa the 1970s. Unfortunately, here powerful voice was not discovered proper until the late-90s. As the story goes, Jones never stopped singing over the years, even as she held down various day jobs, including a stint as a corrections officer at New York’s Riker’s Island prison.

Her big break came when she more-or-less hustled her way into recording session with the great Lee Fields, and proceeded to blow the socks off the session’s organizers. One of those organizers was Gabriel Roth, better known to many as Bosco Mann, bassist for The Dap-Kings. Roth is, of course, also the co-founder of Daptone Records. And after baring witness to the show-stopping talents of Sharon Jones, he made damn sure she came to Daptone to record her first album, tabbing his own fully funkdified band to back her up.

Titled Dap-Dappin with Sharon Jones & The Dap-Kings, that momentous release dropped resounding acclaim in 2002, and was followed in 2005 with Naturally, which many consider to be the finest work Jones and The Dap-Kings released prior to her 2016 passing from cancer.

If you’ve heard Naturally, you know it’s hard to argue that point of view. Thankfully, the Bandbox team agreed, and featured it as their Jones exclusive. Of the album, I’ll simply say you may not find a more blissfully funky collection of songs released in the past 20 years, with Jones and The Dap-Kings ripping through a 10-song, no-nonsense set fronting songs of love, lust, loss, and longing with the propulsive energy of James Brown, the soul of Aretha Franklin, and the plucky verve of Mickey and the Soul Generation.

If those names mean anything to you, and you somehow never got down with the funky sounds of Sharon Jones and the Dap-Kings, there’s no time like the present to rectify that glaring oversight. And if you’re interested in learning a little more about Sharon Jones and her Dap-King backers, you’ll find lots of info about them in the pages of Bandbox’s accompanying zine. Check it out.

In case there’s any question the no-nonsense vibe that permeates Naturally carries over to the seemingly simplistic, yet luminous translucent yellow pressing from Bandbox.

Simplicity aside, you had better believe that wax is gonna light up any deck it comes into contact with.

The great thing about Bandbox is that they ultimately leave the decision-making up to you. So if you’re looking to snag a copy of your fave band’s most popular album on snazzy colored wax, you can do that. Ditto for some of those overlooked albums chock full of tasty deep cuts. And rest assured, if you’ve looking beyond Naturally for your collection, you’ll find all that and more in the Bandbox vaults. Happy spinning, gang!