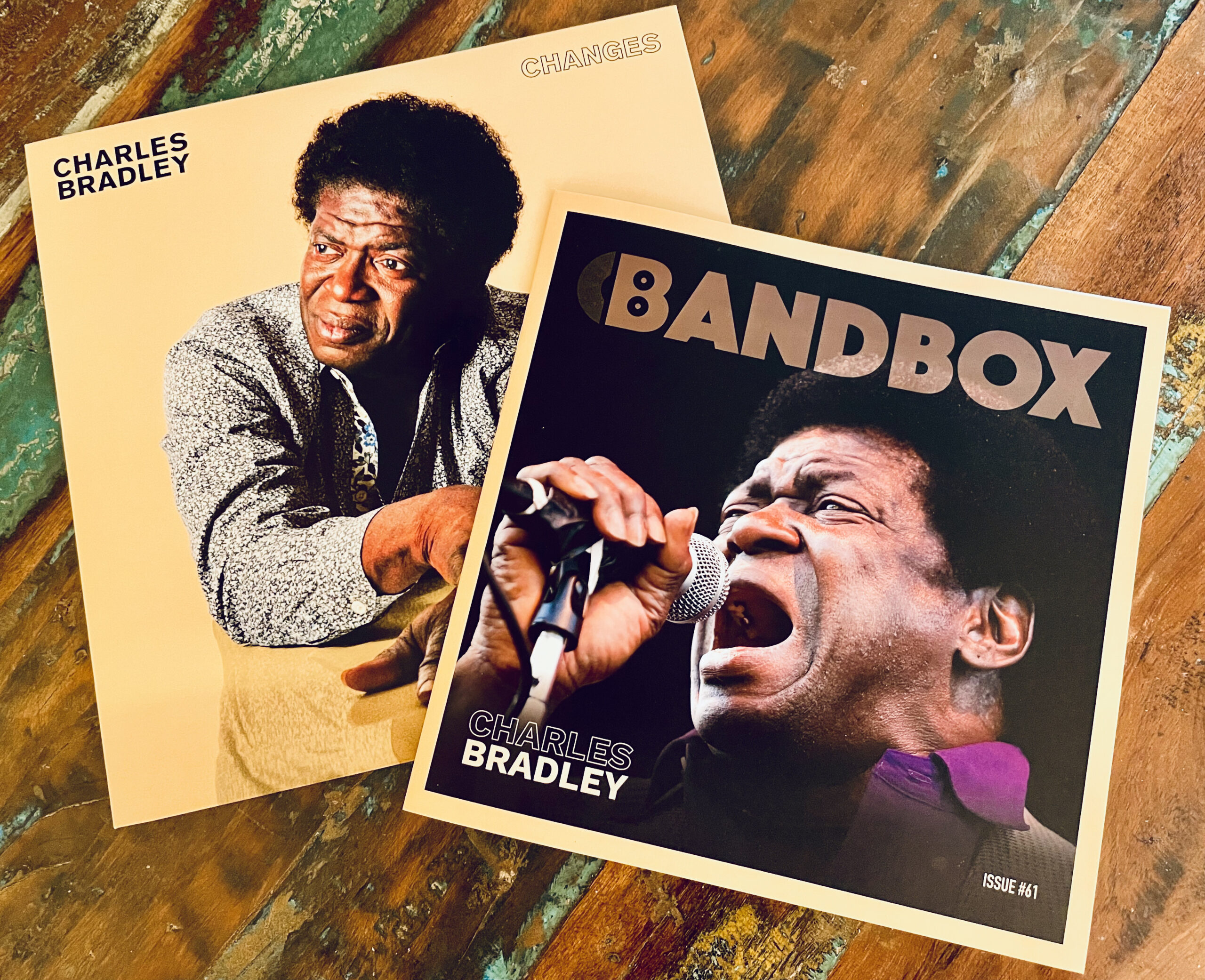 Prepare your turntable for heavy rotation spinners vinyl fans, ’cause Bandbox is out to bring the record store to your own front door.

Did I mention Bandbox even offers FREE SHIPPING for members? They do. And it’s the icing on the record club cake. So what came tucked inside this month’s Bandbox? Nothing short of a neo-soul stunner from the late-great Charles Bradley.

Charles Bradley’s late-career output was both fierce, and limited. Thankfully, Team Bandbox chose the best of the bunch, pressed it on a killer exclusive color-way, and boxed it up with fan-zine that gives new meaning to the term “deep dive.” Here’s a quick look.

The cover art on the back of that sleeve is apparently a Charles Bradley original. Which is kinda cool.

Before we get too far, you should know Bandbox has a major deal going on for new subscribers, and all the info you’ll need to take advantage of it is right here on this card.

There’s also a download card inside the sleeve for those who enjoy digital copies of their vinyl treasures.

And there’s full album credits on the inner sleeve for folks who wanna know who did what on an album.

In the music business, every star has a story. Few of them are quite as fascinating as that of Charles Bradley. As that story goes, the retro soul master was raised in utter poverty, splitting time between Gainesville, FL and Brooklyn, NY. At age 14, Bradley became a runaway, living on the streets until a Job Corps gig led him to train as a chef in Bar Harbor, Maine, where he stayed and worked in anonymity for more than a decade.

Prior to his exodus from Brooklyn, Bradley did, however, have the chance to see soul icon James Brown perform at the legendary Apollo theater. The experience would eventually become life-changer as it first inspired young Bradley to learn how to move and sing like the Godfather of Soul. Decades later, an adult Charles Bradley actually found himself not-so ironically making a living as a James Brown impersonator. And that is indeed how he was discovered by Daptone Records co-founder Gabriel Roth, who promptly signed Bradley to the fledgeling label.

That fateful encounter came in the early 2000s, with Bradley releasing his first Daptone single in 2002. Nearly a decade later, he released the first album of his career, 2011’s acclaimed No Time For Dreaming. He was 61-years old at the time. The brilliant Victim of Love followed in 2013, and was met with equal adoration. So too was 2016’s Changes. Charles Bradley was 66 when Changes hit record shelves. It was the last album he released prior to his 2018 death. Many believe it to be not only his finest work, but one of the best modern soul albums released in the 21st Century.

Of course, there’s nothing particularly modern about Changes. In fact, the album sounds and feels like one of those funk-forward Memphis soul gems the likes of which Stax Records and Hi Records were cranking out on the regular circa the late-60s and 70s. And yes, that sound proves a perfect pairing for Bradley’s gravely, James Brown-esque vocals. So much so that one has to wonder just how the man didn’t become a superstar during the heyday of the funk/soul scene.

Better late than never, I suppose. And thankfully, given his late-in-life output, fans of the genre will surely be getting down to the funky sounds of Charles Bradley for generations to come. For the record, if you’re looking for a gateway into either the work of the man himself, or the funk/soul genre in general, you could do a lot worse than Changes, which has never sounded as good on vinyl as with this Bandbox exclusive. Just FYI – it’s never looked this good either. Have a gander for yourself.

While you marvel at that amber/smoke beauty, please remember there’s an equally lovely, Charles Bradley-centric zine in the box with it. And it features a full, track-by-track breakdown of Changes to boot. Here’s a look.

Lovely as it is, that zine won’t dress up your deck half as well as the vinyl does.

The great thing about Bandbox is that they ultimately leave the decision-making up to you. So if you’re looking to snag a copy of your fave band’s most popular album on snazzy colored wax, you can do that. Ditto for some of those overlooked albums chock full of tasty deep cuts. And rest assured, they’ve still got a few copies of Changes on deck if you’re dying to get your hands on one. Happy spinning, gang!