Avabel is billed as a free-to-play MMO for the tablet market, but a glance at the graphics separates it from the billions of other multiplayer adventure games. The game is just so pretty!

Avabel avatars are detailed and cute, with the anti-gravity hair and stylized fashions we love in import RPGs. I was pleased to discover that female avatars default to a jacket, skirt, and boots, and not a battle bikini. I did see the occasional pants-free outfit in world, but I had no trouble looting and buying all kinds of armor. Running around half-naked is a fine option but an unpleasant default, and Avabel gets that exactly right.

The gameworld is gorgeous, with panoramic views of strange flora in a fantasy land, and detailed textures on items and environment. Avabel is a delightful reminder that a mobile MMO can be visually engaging. It’s a gamer’s dream to play an MMO while sprawled on my couch, and really fall into a fantasy world, not just run a little icon back and forth in a 2D world, clicking on monster icons to attack.

Just a little traveling in Avabel shows a really different feel to each environment. Unfortunately, my game goals — stab monsters and grab their stuff — seemed to be the same in every environment. The beautiful world could be greatly improved with a little context. Some world-building mission narrative, would save this from the rinse-and-repeat kill grind.

I came to games when Sierra and LucasArts adventure games required six or eight disks and the better part of a day to install, so it feels wrong to complain about loading time in Avabel. Still, I spent quite a lot of time looking at loading screens, waiting to enter new environments. 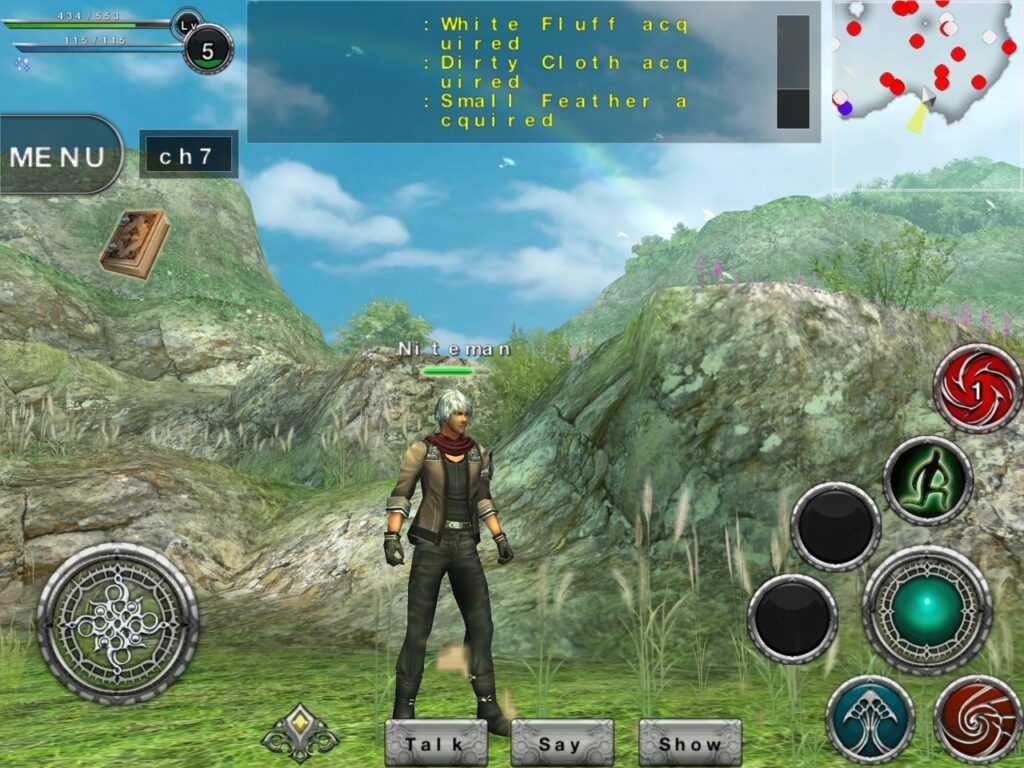 One scene showed butterflies passing by and flowers rustling gently in the wind. Trying to line up a shot for a screenshot, though, just highlighted all the ways the UI is so painful and clunky.

Describing the problems in the UI depresses me. Here, I’ll save you some trouble. Think of a way a game interface could be bad. Got one in mind? Ok, Avabel’s UI is bad in that way. It is clunky, with important actions hidden behind menus and sub-menus with uninformative names. The intention seems to be to use the left hand to navigate and the right hand for actions, so many of the commons actions don’t use those locations that I felt I was rarely using the game in an optimal way.

The UI is strangely inconsistent, with a visual achievement book accessible from the main screen, but a text-only inventory, under Menu → Item → Inventory. (Really? Am I going to go hitting achievements so much more than I’m going to change my armor, check my loot, trade items, upgrade my weapons, use healing items, use magical items, or any of the other inventory-based actions to engage with a grind MMO?)

The text is so poorly localized into English, with awkward word choice, confusing sentence fragments, and almost incomprehensible naming conventions. I’m not unsympathetic to the plight of Avabel’s translators and localizers. There are some unique challenges when localizing a game from a character-based Asian language to English. A three-character text field in a Mandarin game, for example, could convey an entire phrase, but only STR or DEX in an English version. In Avabel, English text is both sometimes abbreviated into confusion and sometimes spilling over the sides of text fields.

Hope For The Future of Tablet MMOs

Avabel could avoid almost all of my complaints by slapping a beta label on one of the endless loading screens. A beautiful MMO — even a fairly awkward, somewhat grindy MMO — that I can play on my iPad in a coffeeshop or while stretched on my bed is such a delightful concept that I’ll give it a lot of leeway. I hope Avabel will sort out the launch kinks and add usability and storyline to make a gorgeous tablet MMORPG a reality.