Free up your device while you accompany your ears 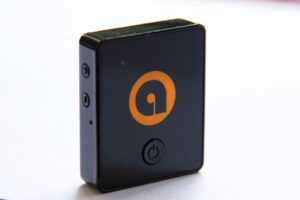 Auris is one of the newest gadgets to come into fruition by way of their Kickstarter campaign. The Auris Bluetooth Adapter allows users to wirelessly play and control music from any medium that is Bluetooth enabled. The elegantly designed piece gives iPhone, iPad, Android, and Blackberry users’ remote range to play sound out of their music dock rather than the phone itself.

The handy music receiver seems to have found a solution to such a common problem along with bringing back relevance to music docking stations. The device resembles an iPod shuffle and works within 33 feet of the connected platform. The Auris adapter can play music and audio from any program streaming from any Bluetooth enabled operating system. This includes music from your favorite iPhone playlist or any audio from games or movies playing from your device.

Touchkraft, the creator of Auris, has truly built their product with their users in mind. The gadget is rather customer friendly to say the least with its ability to store up to 8 paired devices. The process is as simple as walking into the device range, sync, and start streaming. Auris also automatically connects with the last used device. Don’t worry about charging it either, the music dock acts as its power supply which makes for less worrying and less trouble for every customer. The product also comes with a 30-pin connector to AUX + USB cable designed to connect to any audio system with an AUX jack along with 2 color options each with a look of simplistic style. The versatility and usefulness of the Auris is proven to be liked among its campaign backers. As of October 10th the Kickstarter campaign finished with 2,990 backers who produced a funding amount of $131,911, well above Touchkraft’s pledged goal of $40,000.

If you weren’t one of the initial backers to their campaign you can pre-order the Auris Bluetooth Adapter, updated with Bluetooth 4.0 compatibility, from Touchkraft. Although shipping doesn’t begin until January 2013, the Auris is a gift any geek will willingly wait for.