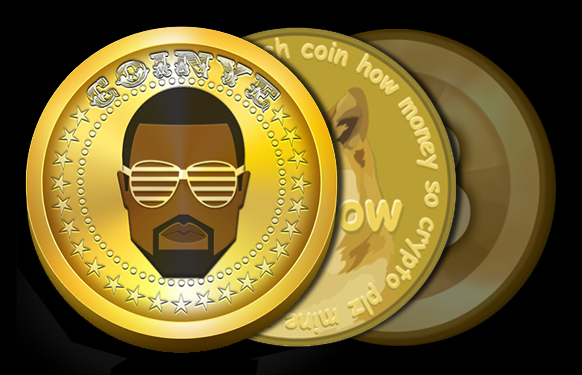 The Bitcoin bandwagon is proving to be extremely spacious. Dogecoin already popped up to show everyone what happens when the reasonable inclination to have an online currency without a shady history somehow meets the ludicrous desire to latch onto the latest rip-roaring side-splitting meme. Sweet, precious memes. Now comes Coinye West, set to drop at the weekend, ‘drop’ being a term from the music business typically used to refer to albums. I know this as I am a media-savvy individual. Inspired by lyrical genius Kanye ‘Kanye West’ West, a typical Coinye—or yeCoin?—is apparently intended to be used for things like purchasing concert tickets.

Let it never be said that I’m not an opportunistic individual; in the hope that I will attract the attention of gullible rich people worldwide, I have some quality ideas for other currencies we can hype, exploit for monetary gain, then allow to dwindle into nothingness. Onward to an absolute lack of economic responsibility.

Dogecoin is a huge disappointment. It just has a picture of a dog on it? Unacceptable. Why not a coin that can only be owned, bought or sold by those of the canine persuasion? Most of us love dogs, with their silly wet noses and big floppy ears and persistent enthusiasm. Given how fundamentally ridiculous many aspects of the modern financial world are, it’s not outside the realm of possibility that questionably-intelligent dogs could prove to be consistently more responsible with their money. The big downside is that human currencies might look terrible in comparison with it, leading to a difficult borrowing relationship maintained only through the offering of copious walks, doggy treats, and chewy toys.

I can’t say I’ve tested every type of note or coin in circulation, but I think I’ve collected enough evidence to infer with some confidence that money does not typically burst into flames when thrown. This could be easily rectified. While it wouldn’t work too well until the currency became popular enough to warrant physical representation, I suppose early adopters could simply promise to set themselves on fire upon taking possession of any Dollartovs. If you can’t trust the obviously insane, whom can you trust?

No problem with lack of real-world presence here. We’d need much larger wallets, and most likely larger pants to suit the larger pockets necessary, but just think of the many benefits of moving to a Galaxy Note standard. I hope you can think of them, because I’m drawing a blank. I imagine inflation would be fairly tricky, and phone retailers would immediately become massively wealthy, which could be entertaining. Call this one a backup idea.

We all know how important it is to cherish the elderly among us. They have raised us, taught us, given us butterscotch candy, and forced upon us an endless cavalcade of apocryphal anecdotes about how cell phones will make our brains explode. I can think of no better way to honor all they have done for us than by attributing economic significance to old age. Suddenly a care home becomes a bank, and the grandkids want to visit every week because it’s important to watch their investment.

Coinye West is by far the most preposterous thing I’ve read about recently, and I’ve been reading a book called 101 Extremely Preposterous Things so you know that’s a big accomplishment. That anyone can see it as a worthwhile idea holds a perverse fascination for me. Bitcoin has been getting some serious publicity, and it’s to be expected that everyone now wants to copy the formula, but… this was reported by the BBC. The BBC! Sincerely!  With no ironic detachment! Now, maybe technically, if you really twist the scenario, you can claim that I’ve appropriated this development and ultimately exploited it no less severely than anyone else has. The big difference is that I’ve employed a heavy veil of satire.

Ah well, looks like it’s a slow start to the year. Wait, I have one final suggestion. Maybe we could move to a Kanye West system whereby whoever has Kanye West gets absolute control of the world, provided everyone accepts that Kanye West is not able to possess himself and correspondingly not eligible for contention.

Seriously though, we should at least reject the daft notion that inventing a new currency will somehow make everything better, because it really won’t. Invest in Bitcoin if you have a good reason to, but forget its imitators until they have something different to offer that doesn’t involve gimmicky foolishness.