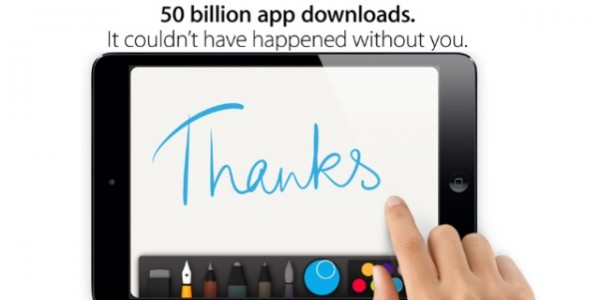 Apple’s iOS App Store had its 50 billionth download yesterday. As part of its fortnight-long contest, Apple will be giving away a free $10,000 iTunes gift card to the person who downloaded the 50 billionth app. 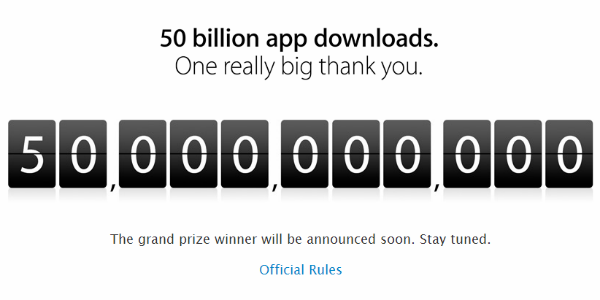 Its a huge, huge number. 50 billion is 50,000,000,000 – yes, that many zeroes. Having started in 2008, Apple’s App Store got there in just 5 years. To let the magnitude hit you, here are some figures: 50 billion downloads in 5 years translates to 10 billion every year. Or a whopping 1 million downloads every hour – or, about 320 downloads EVERY SECOND for 5 years straight.

But those are just averages. In reality, 10 billion of those downloads happened since January of this year itself.

Apple ran a countdown on its App Store website as part of the celebrations. Different comparisons were thrown around to give users an idea of the size of the number.

“With 50 billion bricks, you could build 12 Great Walls of China.”

You needed to be 13 or older to be eligible for the giveaway, in a country where the App Store is available. Alternatively, instead of downloading, you could also fill out an online form to register for the contest.

This isn’t the first time Apple is giving away prizes. Only in February this year, Apple gave away a €10,000 iTunes gift card to Phillip Lupke from Germany, for downloading the 25 billionth song on the iTunes Store.

The App Store is ahead of all other app stores, belonging to different platforms, in terms of downloads. Blackberry’s App Store crossed 3 billion downloads in 2012, while ailing Windows Phone got its first billion only in February this year.

Android’s Play Store, which launched within 3 months of the App Store, however, has been catching up quick – despite the initial advantage Apple has had in terms of handset sales. At the ongoing Google I/O, Google announced the Play Store had surpassed over 48 billion downloads.