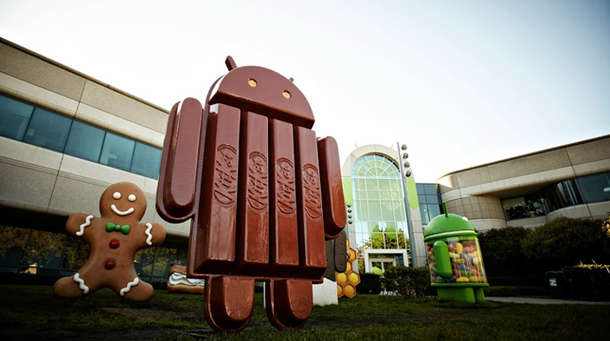 Google will imminently begin rolling out Kitkat, the latest (and hopefully greatest) version of its ubiquitous mobile operating system. The OS will be introduced with the newly-announced Nexus 5, but, Google claims, will move to other devices fairly rapidly.  In the ever-changing landscape of the smartphone world, let’s consider how things might progress.

It seems like one of the main goals in the development of Kitkat was to tackle the fragmentation issues that have been so central to criticism of Android, and if Google can deliver on the details they’ve provided thus far, they may well be very successful. It’s said that 4.4 can function normally on as little as 512MB of RAM, suggesting that–given time and a little trimming–custom ROMs built from it will eventually be available for devices that might not even have been able to handle Ice Cream Sandwich. While this won’t be too helpful to general users relying on OTA updates from their providers, it is encouraging to think that entire phone ranges, flagships to budget models, will soon be released with one OS version across the board.

With Google’s wide-ranging purview, it is no surprise that they want to handle as much as possible in-house. The update to Hangouts is another step in that direction, offering (though not mandating) SMS integration. Along with the introduction of Quickoffice and the existing convenience of Gmail attachments dropping into Google Drive, it shows that their efforts to draw together the numerous strands produced by their varied divisions–whether OS versions or Google apps–are gathering pace. That said, the implementation in Hangouts requires some work; the text messages and IMs are still kept separate, making things more confusing than they need to be.

Google Now as the Interactive Center

Numerous small things have changed with the stock launcher: transparency, better use of space (most notably in the app drawer), smooth and stylish transition effects, a strongly cohesive feel. But the one truly significant difference comes in the form of the swipe from the left that brings up Now, indicative as it is of the platform’s future. You may have used and enjoyed Now in its previous incarnations, but it has taken another step with Kitkat and was clearly intended to be central to the user experience.

It will be interesting to see how the voice control functionality is embraced by users. An obvious comparison can be drawn with iOS’s Siri, which, while capable (though not as versatile as Now) is often talked of more as a novelty than a serious tool. Even so, with future devices likely to be shipped with low-power CPU cores dedicated to listening for hotwords–‘OK Google’ being the current choice–the level of integration on offer may be too useful to ignore.

I’m running an early port of Kitkat on my Nexus 4, and Now is significantly faster and more responsive than it was with Jelly Bean. I’ve pushed it somewhat to see what it can do and been pleasantly surprised; the voice recognition seems more accurate, and the cards are impressively detailed and complex. Google say that an upcoming update will equip Now to easily interact with installed apps. As a result, it could eventually well be the case that every popular app in the Play Store will communicate with Now, providing the user with a smart hub that can do anything the apps can do and perhaps even use them in combination to provide what would be a seriously formidable service. For example, imagine a businessman telling Google Now to book an international trip with the same details as a previous trip on record, and Now being able to cross-reference information from several relevant apps to do all the work.

Apple and Google are the main competitors in the mobile sector (for software, at least), and they have generally differed in their design philosophies. Google has traditionally offered openness and customisation, while Apple has offered polish and consistency of vision, but their continuing fight for supremacy stands to push them both in interesting directions.

With the availability of OSs that are starting to seem similarly bug-free and feature-rich, it is a fascinating time for consumers. Kitkat probably won’t convince many iPhone users to change platform, but that’s not feasible these days for either side. After all, their tussles have not prevented either company from making obscene amounts of money. If Google can stay the course though, as I expect they will, they stand a chance of nibbling into the dominance Apple has held for so long when it comes to word of mouth recommendations.