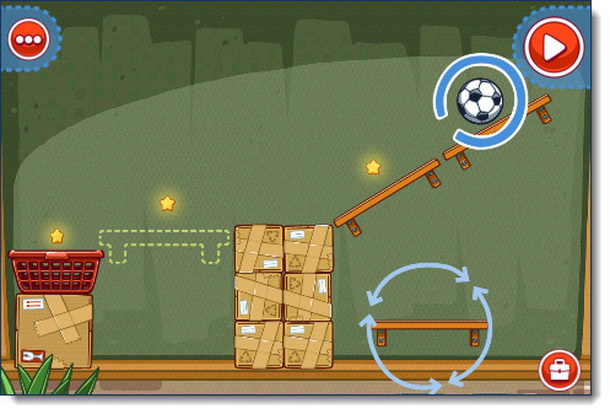 Amazing Alex is an Android game that deals with the basics of physics and lets you build objects from the simplest things that we see around us. There are also a ton of achievements in Amazing Alex game, the antics of a young boy and chain reactions including several objects that make it a fun game for players of all ages.

The game starts off from Alex’s classroom and then moves on to the tree house and so on – making the game an interesting ride of fun. Apart from that, to succeed in the game, you need lateral thinking and creativity that makes the game one of a kind.

Amazing Alex is a product of Rovio, the famous game development company, which gave us the huge and ever-popular Angry Birds.

There are two versions of the game, one is free and the other can be downloaded for $0.99. I have not tried out the free version to be honest, and in this article I am going to discuss the paid version. However, if I have heard correct from other gamers, both the versions are kind of similar.

The game play of Amazing Alex

This is just an example though and there are several other similar tasks available for you to accomplish. To see the interactive objects available at any point of time, you can click on the small briefcase icon visible at the lower right of the screen. The play button is available at the top right and pushing that will give you the path of any moving object. Thus, you can check your contraption for possible mistakes.

There are puzzles across four different locations and other than classroom. The rest are: The backyard, Alex’s bedroom and the tree house. To move to the next level, you need to complete the different challenges of the current level and also collect three stars during the process.

There are a total of 35 interactive objects available for you in the game and it consists of 100 different levels with varied difficulty. For a single problem, there can be multiple solutions and that makes the game even more challenging. To complete a level, there is no time limit available and hence, there is no need to put pressure on yourself to hurry through.

Even though both are from the same developer, Amazing Alex is definitely no Angry Birds. But, the graphics are good, the game play is engaging and that’s what make Amazing Alex a must try for Android users who love to solve puzzles.