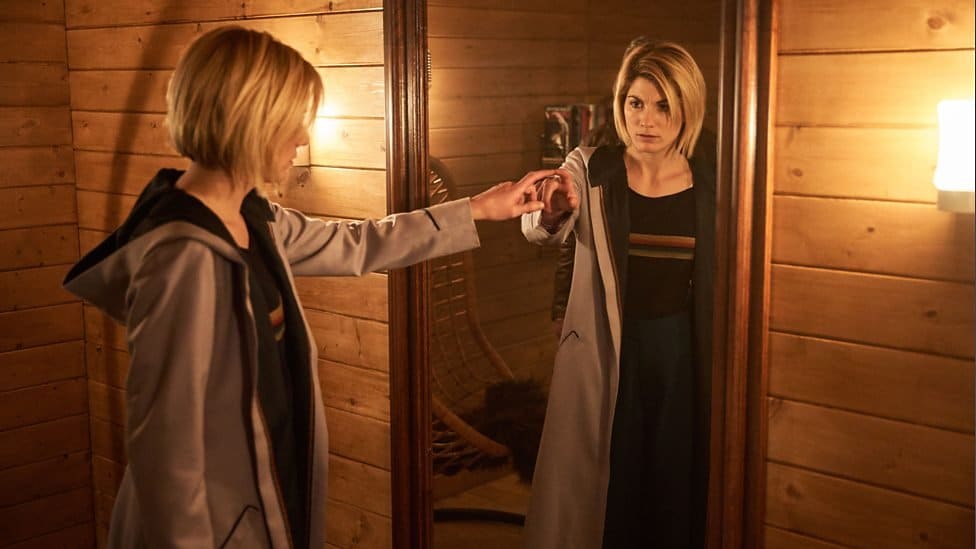 When we look back on season eleven of Doctor Who in a few years’ time, I have a feeling this week’s episode may be one we point to as an encapsulation of both the best and worst parts of the season.

Unless, of course, we’ve forgotten about this episode entirely and have to depend on Wikipedia to remember what happened. Because there’s really nothing about it that’s memorable at all.

Don’t get me wrong—it’s not a bad hour of television per se. It uses a very interesting concept to address some of life’s most basic questions: how far will people (or conscious universes) go to be loved? And when is a relationship so toxic that, despite how much two people (or Time Lords, or frogs) love each other, they have to say goodbye to keep from destroying each other? And maybe the toughest question of all: if you could be with someone who looks and acts like the person you love, even though you know it’s not really them, would you take that over not being with them at all?

It’s also a bit of a stand-out episode this season in that the Doctor isn’t dealing with a major social justice cause like the ones she’s tackled in previous weeks. And we don’t really meet any awful humans (okay, Erik’s kind of a shit dad for leaving Hanne and making her think there are monsters outside, but we’ve seen a lot worse). Instead, this week’s “villain” is the Solitract, a conscious universe that just wants some human companionship. Of course, pretending to be someone’s dad spouse to lure them in isn’t the best way to go about it, but you can’t blame a universe for trying, can you?

In the end, the Doctor and Ryan make new friends, Hanne gets her Dad back, Ryan and Graham forge an even deeper connection, and everyone lives happily ever after. And that’s been the basic formula for just about every episode this season. But is that really enough? I mean, we don’t expect people to die left and right, but can we at least get something that truly feels like a life-or-death situation?

I’ve said from the beginning that having a woman flying the TARDIS is fantastic. And Jodie Whittaker is doing a great job with what she has to work with. But that’s the problem (or at least one of them). It’s almost as if the writers are afraid to give her anything of substance, and it’s getting a little frustrating. I mean, as much as I’ve enjoyed watching her take on systemic racism, corporate greed, religious oppression, and gender inequality, I’d really love to see what she could do with a Dalek or a Cyberman.

Instead, we get what feels like a (and I HATE to use this word because of the negative gender implications, but I can’t think of a better one) gentler version of the Doctor that seems to have very little in common with her predecessors. Even the rich history of the character seems to have been forgotten. And maybe that’s by design. Maybe the BBC is going after a different demographic this season with two millennial companions to go with the first female Doctor, and they assume those of us who have been Whovians for years will follow along regardless. And they’re probably right. Besides, change can be good, and I’ve written about plenty of positives this season. It’s not all bad, by any means.

But it just seems like, in an effort to make the show more appealing to new viewers, they’ve taken out a lot of the things we fans of the show really enjoy. This week’s episode is a perfect example of that. It’s good, but it’s not great. And it’s not memorable. And the first female Doctor deserves better.